by Angelo Muredda A donkey meets the dregs of human civilization and comes out worse for wear in Jerzy Skolimowski's EO, a sometimes whimsical but ultimately gnarly animal-rights fable that earns its righteous closing exhortation against the factory-farming industry and anyone who tacitly endorses it by eating meat. Though thematically indebted to animal odysseys as disparate as Au Hasard Balthazar, The Incredible Journey, and War Horse, EO is at once more formally adventurous in its endlessly roving camera and psychedelic set-pieces and more dispiriting than even the Bressonian incarnation of this subgenre, ultimately coming off like a noble beast's ground-level vision of the horrors of Come and See. 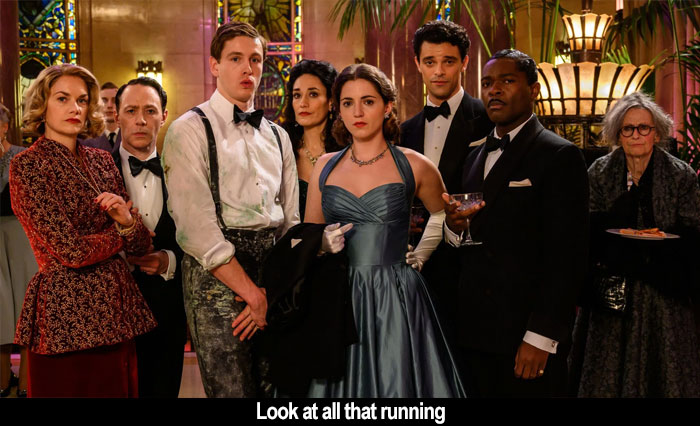 by Walter Chaw TV director Tom George's feature debut See How They Run is a Wes Anderson shrine decorated with screenwriter Mark Chappell's theatre-brat deep cuts, which ultimately just leads one to ask what of it is its own. Set around a murder that takes place at the time of the 100th performance of Agatha Christie's The Mousetrap, complete with original cast members Richard Attenborough (Harris Dickinson) and Deila Sim (Pearl Chanda), the whole thing is a twee exercise in medium shots, split screens, and not much else. George and his production designers are gifted at creating clean, period-cozy environments, but all those acres of slick really do is demonstrate how money can buy a talented team of costumers and craftspeople in the pursuit of a recognizable veneer of prestige and quality. What it doesn't do, at least in this case, is provide the courage and the vision--perhaps it's experience and wisdom--to tell a story that isn't all surface pleasures. The real problem is that See How They Run has nothing to say about the world, about people, or, frankly, about Agatha Christie or murder mysteries. It doesn't even have all that much to say about itself. It's more the elderly Catskills chic of "Only Murders in the Building" than the genuine social revisionism of Knives Out. It has its opportunities; it mostly ignores them. It's a choice, and your mileage may vary.

by Angelo Muredda Joanna Hogg follows up her autobiographical The Souvenir films with a formal digestif in The Eternal Daughter, which filters her usual thematic preoccupations with memory, space, and creation born of loss through the appropriate genre container of English ghost stories, with style and warmth to spare. A gently spooky, dryly funny, and mournful B-side to those films, as well as a companion piece to her earlier texts where personal relationships are tested away from home in rented villas (Unrelated) and cottages (Archipelago), the film stars Hogg's childhood friend and frequent collaborator Tilda Swinton, who reprises her Souvenir role as an older version of patrician mother Rosalind while also standing in for her own daughter, Honor Swinton Byrne, as Rosalind's daughter Julie, a filmmaker who routinely mines her personal life in her artistic practice. Eager to finally learn more about her buttoned-up mother--and, Rosalind suspects, spin new work out of her stories--Julie treats Rosalind (and her dog) to a memory-jogging birthday stay at a mansion from her youth that's now a deserted, mist- and foliage-enshrouded hotel occupied only by the brusque night clerk (brimming with eat-the-rich intensity by Carly-Sophia Davies) and kindly late-night groundskeeper (Joseph Mydell). The women exchange sad stories and pour over the stingy four items on the menu in the seemingly haunted hotel while the days and nights wear on, unceremoniously marked by their routines of dog-walking, pill-taking, and tiptoeing late at night amidst the mysterious sounds of an open window rattling in the wind.

by Bill Chambers At the beginning of this pandemic without end, I bought a used camcorder off eBay so that I could digitize the mountains of footage I generated making movies with friends as a teenager. It was a trip down memory lane that confirmed something I'd always suspected and feared: I was a complete tyrant. Make that dick. I was a misfit with control issues stemming from disability, and I was obsessed with movies. Add a video camera to that--at least in the early '90s, when they were still novel--and you get Napoleon. With his black moptop and squat frame, high-schooler Lawrence Kweller (Isaiah Lehtinen) could be a live-action Gene Belcher--but the huge chip on his shoulder and his voluminous clothing sooner bring Ignatius J. Reilly to mind. He's funny in small doses. Certainly the opening scene of film critic Chandler Levack's feature debut I Like Movies is so uncanny I could only laugh. Lawrence and his best friend--his only friend--Matt Macarchuck (Percy Hynes White) have made a silly video for class. The teacher, Mr. Olenick (Anand Rajaram), shuts it off after it fades out, and Lawrence protests that he's skipped the blooper reel and end-credit outtakes. Mr. Olenick asks what their spoof of A Christmas Carol had to do with the assigned topic ("bias in the media"), and Lawrence says, "I just decided I wanted to do something, you know, more personal and from the heart." A classmate, Lauren (Eden Cupid), sticks up for the video by calling it "cute"--a word that only makes Lawrence apoplectic. Everything that comes out of Lawrence's mouth here probably came out of mine during my senior year of English, when I made a movie about Elvis faking his death to hide from Satan and called it a book report on The Great Gatsby.

by Walter Chaw My parents are dead; my in-laws, too. Us outliving them is how they would've wanted it, and that's the wonder of surviving, isn't it, that this is what happens when everything works out? My dad has been dead for 19 years now, and that anniversary is coming up soon. I'm bad with dates, but my body seems to remember, and I can feel him retreating in my memory. I can't really recall what his laugh sounded like anymore. We weren't the kind of family that took home movies. I'm careful not to disturb the pile of dead leaves that is my childhood, though, because what if there's nothing in the middle of all those paper-thin fragments? Charlotte Wells's Aftersun is about trying to piece together who your father used to be once he's gone: dead or dead enough; it's never clear which it is in Wells's movie, but it hardly matters. We can glean a traumatic event has shaken Sophie (Celia Rowlson-Hall), who turns to a small pile of old DV videotapes she took as an 11-year-old on a trip to Greece with her dad in search of answers to questions she doesn't know how to ask. The questions the film itself asks are elliptical, elusive, as diaphanous as the images Wells puts together to present the insubstantial nothing that's left over after all this time. I'm reminded of childish experiments with microscopes, looking at a housefly's wing under magnification to find hundreds of opaque cells joined in an unknowable order, a jumble, that doesn't give any insight into the bigger picture, much less its function. Viewed in microcosm, anything is just confused nothing.