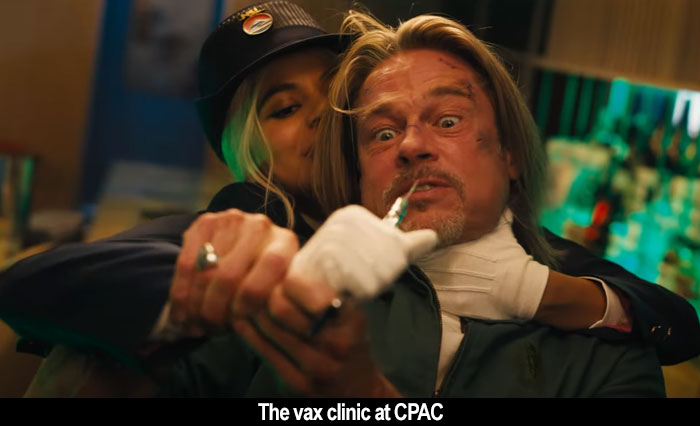 by Walter Chaw I have so many thoughts about David Leitch's Bullet Train, and I don't think a single one of them coheres with any of the other ones. This is most likely a product of general exhaustion, or a lifetime misspent on excess consumption of media colliding now in middle-age with my becoming somehow the go-to for Amer-Asian-splaining of representational issues in American cinema. Like the whole "whitewashing" thing going on around Bullet Train, which is based on a popular Japanese novel by Kôtarô Isaka, who is pleased people like Brad Pitt and Brian Tyree Henry are in this big-budget Hollywood adaptation because it raises his profile internationally. Sony Pictures, whose parent company is Japanese, has already come out saying the same stupid shit about how much they wanted to honour the Japanese source material by hiring the best actors for the project--who happen to be Not Japanese--while Asian-Americans are rightfully outraged about the same stupid shit because of how much damage this ingrained corporate "wisdom" continues to wreak on the Asian-American community. If we continue to pull on this thread, we find Isaka has stolen the entire premise and execution of his book from Guy Ritchie and Quentin Tarantino, who, as we know, have stolen their things from British New Wave gangster flicks on the one hand, Asian cinema on the other--Asian cinema that has its roots in, what, Kurosawa? Whose favourite filmmaker was John Ford? And who was ripped off by Italian guy Sergio Leone, who was ripped off by Sam Peckinpah, who was ripped off by Hong Kong legend John Woo, who was ripped off by everybody for a while there. There's a scene in Bullet Train where Brad Pitt and Brian Tyree Henry, both playing hitmen, fight each other in tight quarters that is awfully reminiscent of Jackie Chan. Another scene recalls Louis Leterrier, who probably learned it from Jet Li--and neither Chan nor Li is Japanese, of course. by Walter Chaw There is a complete lack of pretense to Dan Trachtenberg's Prey--lack of pretense being one of the emerging traits of a filmmaker whose two films so far (both stealth sequels, both tremendously ethical towards their source materials) are lean genre exercises that feel like minor miracles in a landscape studded with sodden, high-profile disasters. Neither a puzzlebox nor a legacy sequel requiring a spreadsheet and an encyclopedic knowledge of a quarter-century of lore, Prey tells a particular, standalone story in an economical way. It's a coming-of-age period piece with shades of Mel Gibson's Apocalypto; what I'm saying is it means business. Set in the Northern Great Plains in 1719, it follows a spirited young Comanche woman, Naru (Amber Midthunder), as she tries to prove herself as a hunter under the shadow of her brother, Taabe (Dakota Beavers), a gifted bowman and all-around badass who has a stranglehold on the admiration of their tribe. When she follows an all-male hunting party in search of the mountain lion that has attacked one of their people, one of the young men asks her why she's bothered, given that they don't need a cook out there in the wilderness. But she sees things they miss in their arrogance and desire to impress one another. Like the skinned rattlesnake left by a path, or the footprint bigger than anything that should be in this place. The boys discount the latter as nothing to worry about, lest they be seen as cautious and thoughtful--as feminine, like Naru.