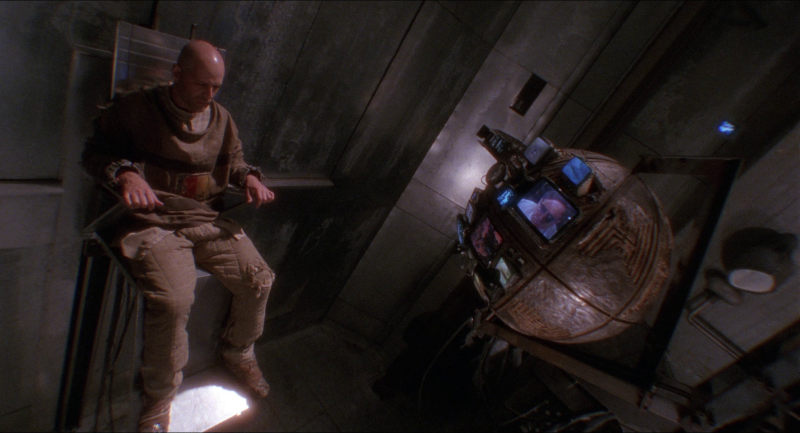 by Bryant Frazer Twelve Monkeys is a movie about a moment. Yes, sure, it's a decades-spanning science-fiction tale about time travel, the illusion of free will, and a romance at the end of the world. Yet its defining facet is its repeated, soulful depiction of a few terrible minutes in the life of a young boy who witnesses an event that's tragic in ways he can't comprehend. That's how the story starts and how it ends, the first thing we see and also the last--a child's eyes, open wide, as he is exposed to the spectacle of death, probably for the first time. Although Twelve Monkeys deals with the destruction of human civilization by a lethal contagion, and the plague's aftermath, less of the action centres on the plague itself than on this little boy. Mostly, it's concerned with a man named James Cole (Bruce Willis), who believes he's a time-travelling agent sent back from the 2030s, after a small number of survivors retreat to the safety of underground caves. Liberated from a prison cell for the mission to contemporary Philadelphia (ground zero for the virus release), Cole is trying to discover information about its origins that can be used, decades hence, to help make the earth's ruined surface safe for human habitation. Success means redemption, since Cole would return to his future world a hero. But in an ironic twist, Cole is almost immediately institutionalized; only psychiatrist Kathryn Railly (Madeleine Stowe), a specialist in "madness and apocalyptic visions," and fellow patient Jeffrey Goines (Brad Pitt), who may be a nascent environmental terrorist, suspect Cole's references to upcoming cataclysmic events may be more than just delusional.