New on Our Patreon

by Bill Chambers Heads-up, current and future Patreons: We recently launched SlipStreams, a weekly column in which Walter Chaw and I take turns recommending four titles currently streaming in either the U.S., Canada, or both. In the current "volume" (#3), which went up this afternoon, I pay tribute to the late, great Ray Liotta in choosing three semi-forgotten films that are among his late-career highlights. Meanwhile, the latest edition (#27) of Walter's regular feature Life During Wartime finds him screening Don't Look Now with his daughter; it might be my personal favourite of this long-running series. These pieces are available to any and all subscribers of our Patreon. We don't do "tiers," since the primary purpose of our Patreon is to support this, the mothersite, but we did feel we owed a few bonus goodies to those generous souls keeping FILM FREAK CENTRAL afloat.

Continue reading "New on Our Patreon" » 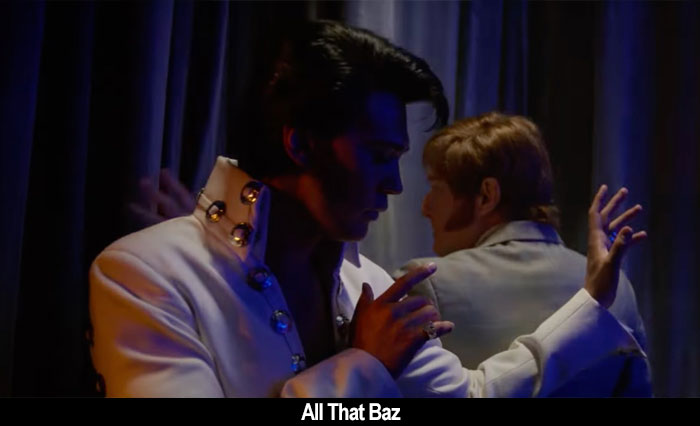 by Walter Chaw Baz Luhrmann's Elvis is part Perfume, part Immortal Beloved--which is to say, it's horny as fuck and formulates music as mass delusion and mind control. Safe to say, the sordid story of the King of Rock-and-Roll is the perfect match for a maximalist director I have found to be excessive to the point of obnoxious, even on those rare occasions where I've liked the movie anyway (see: Moulin Rouge!). Before Elvis, there wasn't an establishing shot Baz didn't torpedo with gratuitous angles and "whooshing" sound effects; before Elvis, his films were not just childish but relentlessly, punishingly childish. The first half of Elvis is more frenetic than the last, though neither sports any affectations that don't augment the story in positive ways. Dissolves, triple-split screens, restless camera movements--they all underscore the breathless headlong rush of Elvis's rise from broke Tupelo hillbilly living in the "Black" part of town to the biggest-selling solo recording artist in history. When it comes time for his inevitable fall, Luhrmann places it in a sociopolitical context, toning down his trademark freneticism in favour of a, most shockingly of all perhaps, thoughtful analysis of several factors that may have played into Elvis's decline into paranoia, drug abuse, isolation, and despair. A story this familiar in a genre as permanently scuttled by Walk Hard requires a certain wisdom to know what to recap versus what to excavate. Elvis walks that line more than it doesn't.