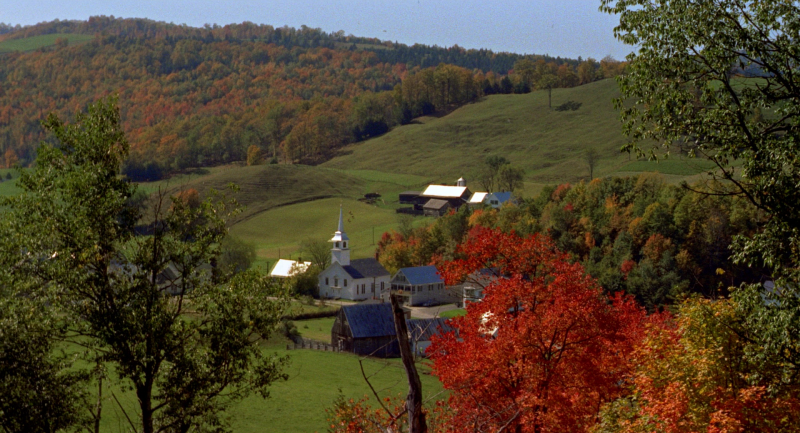 by Walter Chaw Once I realized the person I'm supposed to suture with in Alfred Hitchcock's The Trouble with Harry is the title character, the middle of Hitchcock's three dead protagonists (sandwiched between Rebecca's Rebecca de Winter and Psycho's Mother), the rest of the movie began to make sense to me. Not a literal sense where the characters' behaviour is reasonable, thus making the narrative intelligible in a rational way, but an absurdist, Lewis Carroll nightmare sense, where language is revealed to be meaningless and unstable enough to destabilize perceptions of time and space as well. The Trouble with Harry casts Vermont in fall as Wonderland aswarm with madness and violence, lodged in a time-loop and peopled by a gallery of hatters and dormice (and even an Alice, completely over-the-rainbow insane) preserved in an autumnal, solipsistic amber of their own deconstructionist, semantic derangement. The closest analogues in movies are Michelangelo Antonioni's Blowup and Michel Soavi's Dellamorte Dellamore: the former echoing The Trouble with Harry's thesis that if reality is defined by language, then reality is as subject to slippage as language; the latter harking back to this film's snow-globe meta-fiction, where life and death play out its meaningless permutations in a philosophical exercise inside an alien terrarium. The Trouble with Harry would play well in a double-feature with Scorsese's existentially terrifying After Hours. Godard's Alphaville, too--a noir about the prison of words where every room contains a "bible," which, in reality, is a dictionary with telltale words removed (like "poetry" and "love"), thereby eradicating them from the minds of a citizenry enslaved by a machine god.