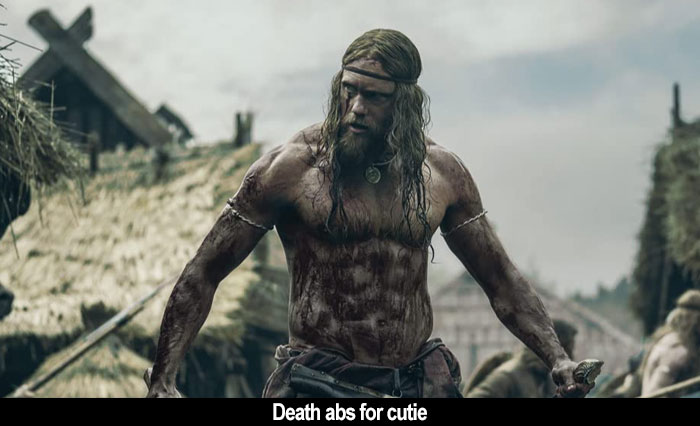 by Walter Chaw That Robert Eggers's latest film proves visually stunning is more expectation than revelation at this point. That it beggars traditional narrative tropes is also no longer a surprise, making The Northman a victim of, of all things, familiarity. There's even a moment about midway through where the natural beauty, the grandeur of the film's settings, works against it: being force-marched through the frankly-ravishing landscape, one slave essentially remarks to another that this place is a shithole. Imagine the claustrophobic vileness of the version of this film Andrea Arnold might have made. Aside from trodding the same frozen ground as the obviously superior Valhalla Rising, The Northman is merely extremely good-looking and very straightforward, for all its mythological underpinnings and ambition to be epic-feeling in terms of its royal melodrama. (No wonder: the ancient Norse folktale it seeks to tell is the basis for Shakespeare's Hamlet.) Sequences like an early coming-of-age ritual in a subterranean mud cathedral promise a picture as surreal and lawless as a Ben Wheatley joint (A Field of England. for instance), but rather than follow that path into Wonderland, The Northman barely reaches for the trippy heights of Eggers's previous film, The Lighthouse, and it's the first of his movies that doesn't require an active viewership. Indeed, the most surprising thing about it is how few surprises it holds.