Everything Everywhere All at Once (2022) 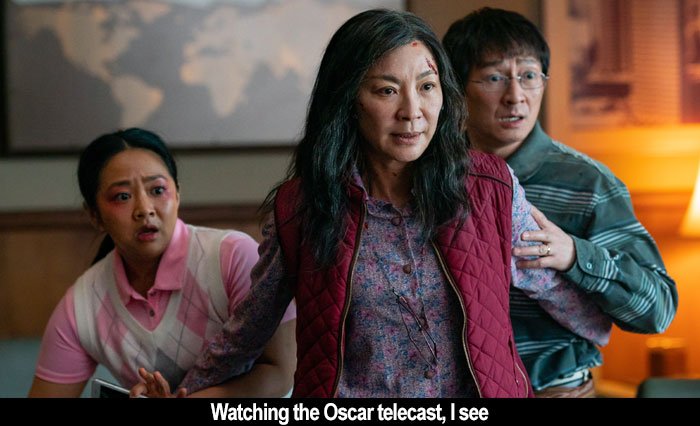 by Walter Chaw When I tell my parents' story to myself, I never tell it as a love story. It's an immigrant story--a typical one, I've come to learn through reading, yes, but mainly through the films of Edward Yang. And it's a story about a broken family, where coldness and mulishness led to lost childhoods, resentments, and, for me, estrangement from my parents to varying degrees throughout my adult life. I became a writer because it was where mental illness and neurodivergence directed me. I needed therapy, and my family didn't approve of that for me. Not even after my suicide attempt. I know my choice of major disappointed my parents, and I think I chose it in part to disappoint them--they who liked to brag about me while doing their best to "break" my sense of self-worth and strip away any pride I had in my accomplishments. I still don't know how to rewire myself to take good news as good rather than as the preamble to a lecture on my stupidity and arrogance. I'm broken. I'm working on fixing it.

Continue reading "Everything Everywhere All at Once (2022)" »