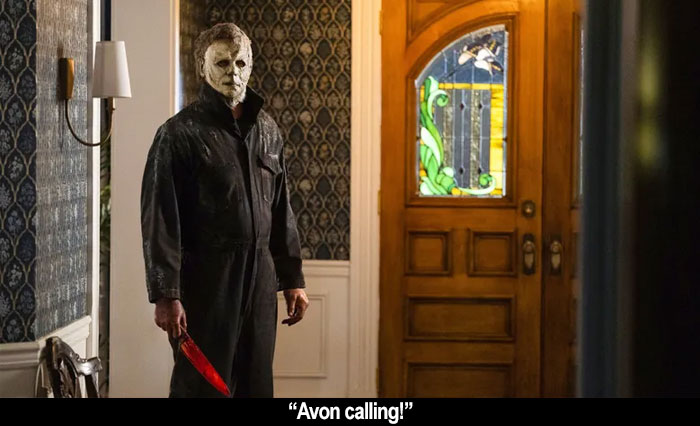 by Walter Chaw I think the point, if not the pleasure principle, of franchise entertainments is the illusion of ownership over them, the obsessive knob-polishing of arcane knowledge not so very different, in many cases, from the pursuit of doctorate degrees in the liberal arts. You dedicate your life to learning so much about an exceptionally narrow field of study that you eventually come to a place where you know a lot about a little and not much about the rest. This monocultural--and, in most cases, monotextual--training tutors one in identifying deviations from the mean, so that what was joy in discovery becomes jealous taxonomy in defense of the tiny corner you've painted yourself into. The point of it all, ultimately, is to complain. When a totem such as John Carpenter's Halloween arrives, it carries with it the inspiration for epistemological/maniacal cults: entire fields of worship in which the limited revelations provided by a singular text serve as the foundation for religion. Hungry for more tablets, new installments are met with jeweller's glasses and tests of fidelity to the one true Word. The complaining, in other words, starts immediately. Is this new version of the Golden Calf walking the right way? Is it behaving as it should? Slow, not fast, or fast, never slow? Is it savage enough? Is the hero worthy? Is the lamb worthy of the blade? Each new film in any long-running series that earns enough each time out to warrant a continuation receives the scrutiny attending the unearthing of a new book of the Bible. Sources are vetted, false prophets are suspected, bloody debates are had in the town square, and finally, it's either the grudging acceptance into a growing canon or a casting off into the wilderness. The complaining is the point. It solidifies a community like the negging built into Evangelical outreach missions, and it's instant. The only thing verboten is if the franchise threatens the fragile identities of the high priests of its insular cult of personality.

After Carpenter's Halloween, which is an all-time American classic, the best films in this series are Tommy Lee Wallace's Halloween III: Season of the Witch, Rob Zombie's Halloween II, and now David Gordon Green's Halloween Ends. The others fall in line behind this fuck-you quartet of smart, weird, melancholic horrors covering an unusually rich diversity of topics all centred around the failure to protect children from the capricious evil in the world and the legacy of that evil as it twists the mundane into the uncanny. Haddonfield, Illinois is as iconic to the American dreamlife as Faulkner's Yoknapatawpha County or, closer to the point, Stephen King's Derry and Castle Rock, Maine and the Friday the 13th saga's Camp Crystal Lake. It's the place where evil coalesces annually into a tall white man with a knife who sublimates the payload of our accumulated sin into a baptismal blood ritual. The Christian myth also warns of the vengeful return of a deathless avatar. There is something comforting about a levelling force in an uneven universe where only death is certain. I'm not sure I've ever seen a rawer evocation of grief and horror than Sheriff Brackett's discovery of his daughter's body in Zombie's Halloween II, nor an ending as hopeless about our consumerist state and its ties to apocalyptic religiosity as that of Halloween III. Predictably, both earned the immediate ire of the franchise's most vocal devotees, although the latter has gained some momentum as a despised relic deserving of reassessment. They violated the ritual compact--and, in both cases, a correction was deemed necessary by those invested in the profit potential of rote repetition. With Halloween 4: The Return of Michael Myers and David Gordon Green's Halloween reboot, the resumption of the usual complaining supplanted the unusual complaining inspired by the chapters trying to build if not a better mousetrap, at least a different one. Blasphemy.

The question that haunts the Halloween pictures is if Michael Myers's shrink's diagnosis of him as a thing of pure, remorseless evil is an accurate one. That he's not a person capable of being killed (which he is in a conventional sense, repeatedly across 13 films) but rather an idea, a metaphor for the inner and outer dark. The bogeyman. He is a mask of civility placed over the atrocity of our darkest impulses. It's why he's only really vulnerable to attack when the mask is removed. David Gordon Green's trio of Halloween films are as explicit about "The Shape" as a trope as the original was, which of course makes a lot of the fandom angry because fundamentalist religions resent the notion their deathless martyrs are elements of stories of redemption or the psychological contagion in cautionary tales. After a satisfying prologue in which we meet hapless nebbish Corey (Rohan Campbell), who's roped into a babysitting gig for a rich brat that ends in bloody tragedy, a DJ (Keraun Harris) is heard on his program asking how it is that someone could get shot multiple times, fall off a balcony, and still vanish without a trace. "Lemme tell you how, because this isn't a man, this is more than a man. This is a beast. One that doesn't bleed." He observes how in the four years since Michael has gone quiescent, the good citizens of Haddonfield are paranoid and fearful in anticipation of his inevitable return. Corey has grown paranoid and fearful, too--branded the "psycho babysitter" and trying to find a hiding place in the scrapyard where he works. Then he meets series heroine Laurie Strode (Jamie Lee Curtis) and more importantly her orphaned granddaughter, Allyson (Andi Matichak). They bond, Corey and Allyson, over their shared outcast status. The way Norman Rockwell's irregulars spy upon them reminded me of the young couple caught in the suburban crosshairs in Splendor in the Grass. Before they can escape Haddonfield together, though, bullies injure Corey--a gash on his palm not unlike stigmata--and Corey imagines (?) he's found Michael Myers alive in a storm drain and willing to pass on the rage and alienation that is the chief export of polite society.

Corey and Allyson's courtship echoes the possible late-September romance between Laurie and folksy local Frank (Will Patton), a flirtation rekindled when they bump into each other at the grocery. Curtis and Patton are wonderful together. Frank asks how Laurie's book is coming, the one she's writing about her experiences evading, and possibly provoking, Michael Myers, and passages from the book function as bridges from one set-piece to the next. It's an awkward device and easy to attack as a narrative crutch, though once I realized it's more of a suicide note than a book, it became something different in my eye: a summary of what Green's Halloween films are about--how trauma can be treated and lived with, but can't be cured; and how more often than not, trauma is a metastasizing cancer that is infectious and fatal. Trauma can be collective. And the victims of trauma spread beyond the immediate victims of a traumatic event. But Halloween Ends isn't a pity party. It's an elegy. In a kinetic dance sequence at a packed honky-tonk that turns into a nightmare, Corey wears a Scarecrow mask from The Wizard of Oz--the character looking for a brain. Does that make Allyson Dorothy Gale? Searching for a way to escape this land arm in arm with projections of her unconscious? Corey has a moment of release before being brought back to reality when he's recognized at the bar and hassled on the walk home. He blames Allyson for taking him out and tells her he's not her project. This is a conversation about how people try to help those who are struggling and, with the best of intentions, can sometimes make things worse. It is a conversation questioning whether the helper is altruistic or selfish. Corey tells Allyson there are different kinds of trauma and that his is not "fixable." That's powerful stuff.

I know people are looking for a Halloween film that's gory and scary in a "fun" way instead of an existential way, probably because deadening ourselves to the consequences of violence makes the daily reality of deadly violence in this country less insupportable. Yet for some (maybe only for me), movies like Halloween Ends that are very serious about how broken a society becomes through feeding on a steady diet of atrocity are actually more cathartic than cinematic theme parks that offer sensation without consequence. I think Halloween Ends belongs in the same conversation with pictures of the New French Extremity: serious sociological examinations of the weight of a culture's decay as it bears down on its citizens, mixed with occasionally devastating payloads of extreme, intimate violence. When the killing starts in earnest in Halloween Ends, it's among the most vicious in a trilogy that's already been called out for its uncompromising meanness. The fate of the DJ, in particular, leaves a mark, with the two tools of his trade (his voice and his turntable) the angry punchline of Michael's Greek judgment of his sins. (Meanwhile, the cruel erasure of Corey's bullies reminded me, of all things, of the final fate of Moochie Welch and Buddy Repperton in another John Carpenter movie, Christine.) Still, for all the floridity of the bloodshed, I think our ability to laugh off their extravagance is hampered by the first hour of this film, a sober deconstruction of what happens to survivors. I lived in Littleton, Colorado during the Columbine shooting. Helicopters flew over our townhouse on their way to the scene, and kids from the school ran through our neighbourhood to escape. For months afterward, the town was a morgue. People spoke in hushed breaths at restaurants, and, quietly, more atrocities unfolded in the wake of our upheaval. We were Haddonfield for a while. Halloween Ends is an evocation of aftermath: romantic in some ways and silly in others, but above all doomed. It's the final film in a trilogy about how the best we can hope is not to get better but to not get worse. It's got barbs, this one.