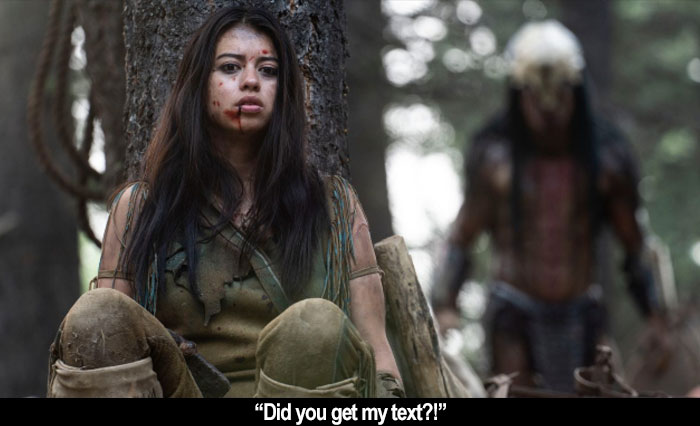 by Walter Chaw There is a complete lack of pretense to Dan Trachtenberg's Prey--lack of pretense being one of the emerging traits of a filmmaker whose two films so far (both stealth sequels, both tremendously ethical towards their source materials) are lean genre exercises that feel like minor miracles in a landscape studded with sodden, high-profile disasters. Neither a puzzlebox nor a legacy sequel requiring a spreadsheet and an encyclopedic knowledge of a quarter-century of lore, Prey tells a particular, standalone story in an economical way. It's a coming-of-age period piece with shades of Mel Gibson's Apocalypto; what I'm saying is it means business. Set in the Northern Great Plains in 1719, it follows a spirited young Comanche woman, Naru (Amber Midthunder), as she tries to prove herself as a hunter under the shadow of her brother, Taabe (Dakota Beavers), a gifted bowman and all-around badass who has a stranglehold on the admiration of their tribe. When she follows an all-male hunting party in search of the mountain lion that has attacked one of their people, one of the young men asks her why she's bothered, given that they don't need a cook out there in the wilderness. But she sees things they miss in their arrogance and desire to impress one another. Like the skinned rattlesnake left by a path, or the footprint bigger than anything that should be in this place. The boys discount the latter as nothing to worry about, lest they be seen as cautious and thoughtful--as feminine, like Naru.

What we know, and what Naru is discovering, is that there's a vicious big-game hunter from outer space collecting trophies in their area, working within an ill-defined code of honour (it will not harvest an animal caught in a trap) and armed with an arsenal of superior technology, including a cloaking device that serves as near-perfect camouflage for it. An unfair tactical advantage? No less so than the tricks of the trade among human big-game hunters, one could argue, and as this Predator seems guided entirely by sport rather than sustenance, the comparisons to its modern earthling brethren are on point and appreciated. He's a dick. And the chauvinism of the men in Naru's community is shared at least in some part by the Predator, which ignores her as it hunts down not just the young Comanche men but also a band of French trappers passing through the region. The juxtaposition is poignant: the Predator represents an immediate threat to maybe a couple of dozen Comanches, while the trappers represent an existential threat to their entire way of life. Prey, like the aforementioned Apocalypto, is a tight action piece over which hangs a cloud of doom. We know that time for the Comanche in this place is brief, a condition hinted at when someone says they need to move north to avoid the incursion of an alien presence--and we know they're not talking about more Predators dropping from the sky. This knowledge makes the pastoral passages of gathering and hunting rituals, as well as scenes where Naru exits her home onto a limitless, unspoiled plain, almost unbearably sad. Life is brutal and short: slay while you may.

And slay Naru does. She trains with a hatchet attached to a string when she's supposed to be gathering herbs--throwing it at trees, retrieving it, pivoting, throwing it at other trees... When she finally gets to use these skills she's developed against the white men invading her space, it's cathartic, exhilarating--loaded with import, should you choose to unpack it, and fun as hell even if you don't. More than skilled with a weapon, she knows the medicinal properties of local plants, including a poisonous mushroom that slows the metabolism enough to cause a drop in core temperature. Fans of the John McTiernan Predator will appreciate how this is a good thing to know. Her strength isn't in her physical prowess--her brother's indeed a better warrior--but in her intelligence and determination. Taane sees her clearly. He's a remarkable hero; they both are. The only bad guys in the film, really, are the men who use technology to take what isn't theirs, and so it was and so it is. It's hard to describe how pleasant it is to watch a picture so meticulously plotted and scripted (by Patrick Aison) that, far from formulaic, feels completely spontaneous and organic. Without giving it all away, every event in Prey serves the dual function of providing tension within the scene and setting up an element of the climax. Every object and scenario in the first half of the picture is a Chekhov's Gun for the second, and it's an absolute fucking delight to watch a film the first time for the surprise and subsequent times out of admiration for its (literal) steel trap of a design. It's not unlike the first Predator, as it happens, a movie that scared the piss out of me when I was 14 and has, in the 35 years since, become one of my go-to examples of a perfect machine of action, horror, comedy, and sociology. Prey may be another. I've heard the cast recorded a dub in Comanche, and I'm delirious at the prospect. It might be the only way the film could get any better.