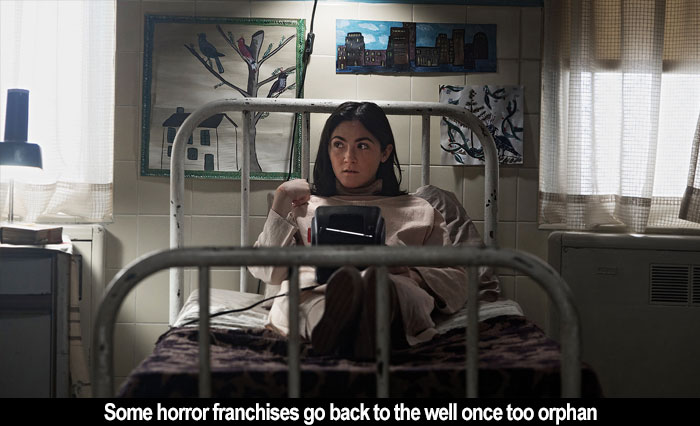 by Angelo Muredda "Esther's terrifying saga continues," promises the confusing promotional copy for William Brent Bell's Orphan: First Kill, a listless prequel to Jaume Collet-Serra's impressively nasty thriller Orphan. It says something about the project's existential inertia that even the pitch is muddled about whether the film's diminutive protagonist, played again with an appropriate mix of madame prudishness and girlish optimism by Isabelle Fuhrman, is coming or going. Arriving a whole 13-year-old's lifespan after the original, which famously culminated in the reveal that Esther was not a helpless urchin from St. Mariana's Home for Girls but a short, thirty-something serial killer from Estonia, Orphan: First Kill dilutes rather than develops the deliberately thin mythos of its predecessor, stretching its punchy 30-second exposition dump about her past into 100 minutes of deadweight.

Where Orphan embeds us with a grieving family looking to welcome a foster child in the aftermath of a stillbirth, allowing us to be swindled along with them, the prequel immediately dumps the pretense and treats its age-faking antiheroine as a fearsome Hannibal Lecter type whose fame precedes her. Cursory overhead drone shots of a snowy path that feel like The Shining done on the cheap bring us to the doors of a psychiatric institution in Estonia in 2007, where a nervous psychologist (Samantha Walkes) has come to observe Leena, the pencil-clutching little patient in choker and pigtails. After a mirthless escape that sees her fending off the violent advances of a sexually exploitative guard, it's on to America for the con artist, who decides to impersonate a long-missing young socialite named Esther Albright (hence the name we know her by), ingratiating herself into the frosty family of fundraiser mom Tricia (Julia Stiles), fail-son Gunnar (Matthew Finlan), and the real target, sensitive dreamboat dad Allen (Rossif Sutherland), a wounded artist whose penchant for black light painting apparently inspired Esther's monstrous, UV-exposed wall art in Orphan. Things are not all as they seem, however, as Esther's intentions for the family come up against Tricia and Gunnar's survival instincts and family secrets.

There's little of Collet-Serra's steady, unfussy craftsmanship and knack for ingenious set-pieces in Bell's sequel. Instead, the bland, blue-washed colour palette, choppy cuts, and unmotivated drifting camerawork give the picture a made-for-streaming quality befitting its fate on Paramount+. The depreciating value extends to the characterizations, which lack the distinct pulpy realism of the original, due in no small part to the commitment of troopers like CCH Pounder as the hater nun who's onto Esther's mysterious family tragedies and Vera Farmiga as the increasingly skeptical mom who, late in her private detective work, kicks through the gaslit-heroine trope to tell her doubting husband (Peter Sarsgaard), "I'm done connecting these dots for you."

The characters here come across less like real people learning they're in an exploitation movie, largely thanks to that initial miscalculation to reframe Esther as an implacable horror-movie monster, which also puts an undue burden on her new marks to be interesting enough to root for. Strong and unkillable like Michael Myers, this new, vaguely supernatural Esther gives Fuhrman much less to play with, particularly with the striking age disparity between actor and character mostly cancelled out. Compared to her crackling chemistry with Farmiga, Fuhrman also has less to bounce off with the sleepier Stiles, who seems only mildly more alert after a thudding third-act twist of her own. Stiles looks more embarrassed than tickled by her heel turn as the problematic, self-preserving descendant of old-stock American pilgrims fresh off the Mayflower, only coming to life when she coaches Esther on the nuances of grifting therapists to get your way--practically a part of her heritage as a rich white person.

Bell acquits himself decently enough in the visual trickery department, obscuring Fuhrman's real age with body doubles and fitting her castmates in platform shoes so they tower over her. But it's not clear why he bothers, or why this particular stretch of Esther's backstory is even worth exploring. The law of diminishing returns comes hard for the confusing new conceit: What if a 25-year-old actress played a 30-year-old woman pretending to be a nine-year-old girl in a 13-years-later prequel set a couple of years before the first film? There's a hopelessly anti-camp sensibility to Bell's efforts to smooth out Fuhrman's already-negligible worry lines and help her pass for an adolescent, only underscored by the fact that the strain is noticeable. You wish he went in the opposite direction, aging his lead actress up to look like Mickey Rooney playing Milhouse's stunt double in that episode of "The Simpsons" about the Radioactive Man movie. Throwing back pointlessly to a past that's better treated as a punchline in a colourful case file, Orphan: First Kill deprives us of the tasteless genius of Fuhrman's original performance as a preteen successfully channelling a degenerate 30-year-old Eastern European vixen in Victorian doll fashion, the better to pass as a child.