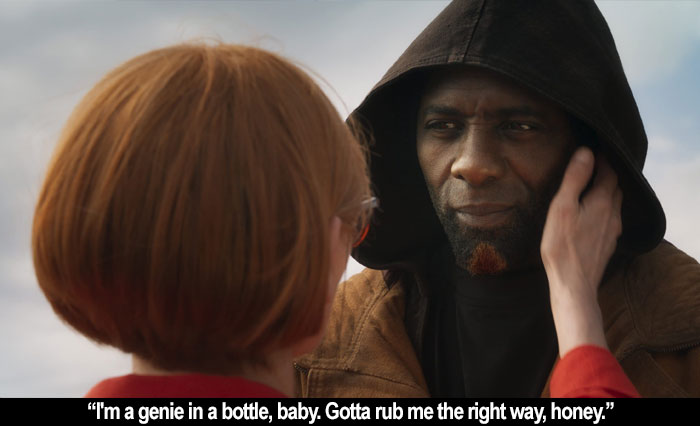 by Walter Chaw George Miller's Three Thousand Years of Longing raises impossibly tangled issues around representation in its tale of a "narratologist" who releases a Djinn from his bottle and wishes he would love her as she, instantly, loves him. Based on a short story by A.S. Byatt, part of a five-part cycle that seeks to navigate the rocky wasteland between colonist and colonized, the victor and the appropriated, Miller's picture is a story about a specific point of view that can never be entirely separated from itself. Whatever the best intentions invested in bridging cultural gaps, the process of absorption and reinterpretation tends to result in diminishment. The things that are most precious in our stories are ephemeral and shy. They're like exotic zoo specimens: they don't travel well and, once imprisoned, wither and die. But like anything judged to be rare and, through its rareness, authentic, stories belonging to others continue to be collected, no matter the damage collection does to them. Mulan, Aladdin... The popular conversation around them has swung so completely into their Disneyfication that Niki Caro, the not-Asian director of the live-action Mulan, based on one of China's most-revered folk heroes, said there "is another culture at play here, the culture of Disney." Unlike Mulan, however, Three Thousand Years of Longing is based on a work by a white, Yorkshire-born British woman (a Dame, no less), and I think it's not so much an attempt to colonize 1001 Arabian Nights as it is an ethical adaptation of a piece primarily interested in how the West has sought meaning for itself through the Orientalization of the cultures it's exploited for centuries.

As such, the centre of Three Thousand Years of Longing is about bookish Alithea (Tilda Swinton), transported to a conference on storytelling via an airline, "Shahrazad," named after the daughter of the vizier of the all-powerful Sasanian king Shahryār, who agrees to marry the despot (who's given to murdering his wives the morning after he has taken their virginity), thus staying her execution by spinning tales with cliffhangers for 1001 nights. Alithea is there to deliver the keynote speech about how stories are the essential way human culture is perpetuated, but she's interrupted twice--once at the airport and then again in the middle of her speech--by manifestations of the mythologies that have been the animating force of her life and scholarship. It won't be the last time her message of how stories have the potential to repair our fractured world will be interrupted--cosmically refuted, even, sometimes by the very gods and monsters she invests in our salvation. Recovered from her temporary fugue, she visits a bazaar and searches through a pile of unsorted doodads, landing on a misshapen glass bottle she is sure has a good story attached to it. The next morning, she attaches a good story to it. Three Thousand Years of Longing is about a brilliant white Scottish woman who must come to terms late in life with the toll of cultural appropriation, even when it's done with the best, the most respectful, the most passionate of intentions. Alithea "uncorks" her bazaar find and releases Djinn (Idris Elba), who immediately offers her three wishes. Alithea, though, wants for nothing--and, being a bit of an expert in this area, she knows these stories usually end with the moral of being careful what one wishes for. She doesn't want anything except the stories the Djinn has collected over his 3,000 years of existence. Beholden to her, Djinn complies.

The relationship between scholar and studied--and, by extension, stories and their interpreters--is in question here: Are stories for everyone to hear? It seems irrefutable in an intellectual life. Are stories for everyone to tell? More complicated, but sure, you can tell whatever story you want. There's a difference, however, between playing the notes and hearing the music. Stories retold gain details as quickly as they lose them. When they are told by people not of the originating cultures, the mass they gain will be culturally impure. Three Thousand Years of Longing argues that it may be impossible to keep anything pure without access to the source. I studied Latin in college for three years to read and translate the Aeneid. But the space the text travelled from page to my understanding of it was nonetheless massive and unmapped. I cannot experience this story as it was told, because my experience is so different from the teller's. It matters the vehicle for the tale, and coercing tales from reluctant tellers is a form of anthropological violence as invasive as archeologists robbing graves to lard the exhibits of colonial museums. We understand this on a micro level when we decline to share abuse stories suffered by others. Those are "their tales to tell." We don't understand this quite as well on a macro level when distinct cultural epics are strip-mined for a global marketplace, and the people doing the adapting are favoured for their ability to sand the edges off cultural markers. Unseasoned porridge is the goal, hence unseasoned porridge is, more often than not, the consequence. But there are motives beyond profit driving people to appropriate cultures they've been taught are more exotic than theirs. There's a...longing for a more captivating creation story shared in the company of a romanticized people oppressed beneath the boot of, often, one's own culture. It is the fetishization of conqueror for the conquered, and there is nothing more quotidian in human cultural evolution.

A.S. Byatt's source material wrestles with these questions and more, housing them as metaphors for Alithea's eventual wish that the Djinn love her and live with her in her home in the UK, next door to a pair of spinster white supremacists who see no value in any culture other than Mother England's. Alithea tries to persuade them with exquisite Turkish Delights, though it's unclear whether they're swayed. She then drops the bomb that her new boyfriend is a perpetually-hoodied Idris Elba. Their reaction is one of awe and, perhaps this is projection on my part, titillation, not just because of Djinn's striking handsomeness, but also because of the taboo of miscegenation and the lusty late-September/October relationship in which their dusty neighbour appears to be embarking. When Alithea discovers Djinn (a creature made of electromagnetic radiation; aren't we all?) can't survive in the technological pollution of the modern West, she realizes how selfish her wish for the romantic weight of his stories in her life is, and so she frees him. A white woman freeing a Black man is fraught at any time, no less so here. There is an unbridgeable power dynamic in the relationship in 1001 Arabian Nights, and George Miller has pulled its weight into social polemic. Alithea's love for the stories of other cultures is unquestioned; her right to possess them is more ambiguous. Three Thousand Years of Longing says the very act of trying to possess them results in their inevitable diffusion. Even the Djinn itself is an appropriation by Islam of pre-Islamic texts and stories--one that has lost its identity as distinct from Islam in the process of assimilation. (In the West, we have Santa Claus and the Easter Bunny as our prime examples of murdering the old by dressing them up in the new.) Alithea begins the film preaching the gospel of how assimilation is as inevitable as osmosis. By the end, she's not so sure a monoculture is inevitable.

I think that's what compels me about Three Thousand Years of Longing, a film that is on its surface about two past-middle-aged persons falling in love over breakfast in a foreign hotel. They've seen some shit, and stories are exchanged about failed marriages and times when lust has betrayed them both. They try again together, and because they're grownups, they're able to be honest with each other when it doesn't work out. You could read the entire film this way--the magical flourishes just that: the replication of that feeling when you first meet someone and wonder if they could be the answer to all your wishes. Then one day, you recognize the distance between the two of you as something that can't be narrowed, and because you love them and value the time you have left, you agree to let them go. If one wanted to, one could see the romance between Alithea and Djinn as the relationship between the Near East and the West, built on misunderstanding and objectification and centuries of Crusades and other atrocities begetting the apocalypse--and then see a possible way forward for us in which we allow one another our differences out of love. Not out of fear or, moreover, because we wish to profit. It's a dream that seems less likely by the day, but all of George Miller's films are fables. Three Thousand Years of Longing is the sequel to Babe: Pig in the City I've been pining for, the obvious product of an artist who gave us the "Tell of Captain Walker" in Mad Max Beyond Thunderdome, the best of the four Mad Max films (though all are great fairytales). It's the best because it's the one in which Miller's themes of how story is the fundamental glue for human existential survival were the most elegantly communicated until Three Thousand Years of Longing came along. While I don't love this movie like I do so much of Miller's work, I do love thinking about everything he's trying to summarize about himself in the twilight of his career. It's what we get to do if we survive for long enough: live a third act, and tell the story of how we got there.