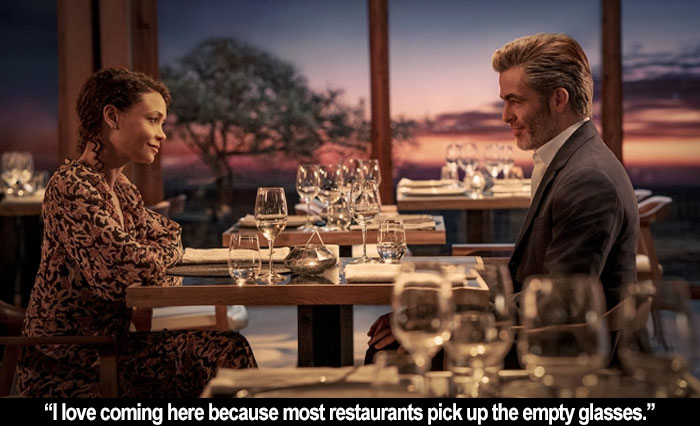 by Walter Chaw Fred Schepisi's The Russia House is a dignified, austere, mature adaptation of John le Carré that feels like a Graham Greene in its colonial exhaustion and resignation. Sean Connery plays "Barley" Scott-Blair, a publisher pulled into a game of international intrigue as the CIA and MI6, from opposite sides of the pond, seek to make him and a young Russian, Katya (Michelle Pfeiffer), into pawns in a game of Cold War chess. Barley falls in love with Katya, of course; who wouldn't fall in love with Michelle Pfeiffer? And he plays both sides--well, all three sides--against the middle in order to secure a romantic future for himself and his lady fair. It's the best film Schepisi's made outside his native Australia, with a Jerry Goldsmith score (featuring Branford Marsalis on the soprano sax) that treats it as a bit of a chamber piece, like a story told to grandchildren when the danger has faded but the love's continued to bloom. They've heard it a million times, but let the old guy tell it: he seems so happy when he does. I've loved The Russia House ever since seeing it on Christmas in 1990. It's one of my comfort movies, twisty enough to engage with performances that feel lived-in like an old and beloved sweater.

Janus Metz's All the Old Knives is an attempt at a The Russia House vibe, replacing Connery and Pfeiffer with Chris Pine and Thandiwe Newton. The drop-off is steep and ankle-breaking. They play Henry and Celia, two former CIA analysts and lovers who haven't seen each other in eight years, not since their disastrous handling of a hijacked plane that resulted in the deaths of all on board. New information arises suggesting there was a mole in the CIA at the time of the unfortunate event, and so Henry is tasked by his boss, Wallinger (Laurence Fishburne), to track down old mates Celia and Compton (Jonathan Pryce) to see if he can even some scores. This results in lots and lots of dialogue plus a few "steamy" flashbacks to Henry and Celia's affair that are less titillating than they are an object lesson in how it's impossible to manufacture chemistry when there is no native vein of chemistry to mine. There's nothing creepier than polite sex; and there's nothing deadlier than a spy movie without tangible stakes. All the Old Knives feels decades past its sell-by date, from its Arab antagonists to its plush, leather-bound interiors, where men in suits hand each other bourbon in thick tumblers. It's all very sedate, the better to denote seriousness, and its deep reliance on running parallel timelines makes it a Harlequin romance in its desperate relational artifice. Wallinger asks whether there's still a torch burning between Henry and Celia, even though they've been apart for almost a decade and she's now married with children. Henry says something about how fire can't burn without oxygen--which is my point exactly.

I did like a moment where Celia wakes up in bed with Henry and says, "Hello, beautiful," because it's not often a male star is called that. I liked less how the prestige of this thing has rendered everyone inside it lifeless, moving languidly like people walking in a swimming pool. A better recent example of what All the Old Knives is attempting is Giuseppe Capotondi's The Burnt Orange Heresy: There, the high gloss is just the smooth glaze overlaying the grotesque machinations of its grasping, drowning heroes. Look to The Russia House as well for an example of how calmness is a mask for big emotions rather than, as it is in this film, the default and possibly sole setting for characters who appear to lack anything resembling an inner life. Consider the scene where Celia wakes Henry (they're always sleeping--like opossums) with a cup of coffee and he says it tastes funny, is it the soy? She says, "It's arsenic," and laughs. I'm not sure if the joke is how because they're CIA spooks, one of them is likely to poison the other, or if she's poking fun at his blue-collar tastes, even though he's the kind of guy who wears a sweater tied over his shoulders. Or is she such a weirdo that she can make cracks about poisoning her lover to which the only response is laughter? Maybe it's meant to convey intimacy--but if so it's the wrong kind of intimacy, and most likely it's a foreshadowing of the series of turnabouts and reveals at the end that pulls the curtain back, No Way Out-style, on who the mole is--if indeed there is a mole--and how the puppet masters are mastering puppets like motherfuckers. All the Old Knives is scored like an antidepressant ad, shot like a wine commercial, and ultimately as flashy, lightweight, and empty as a Christmas ornament.