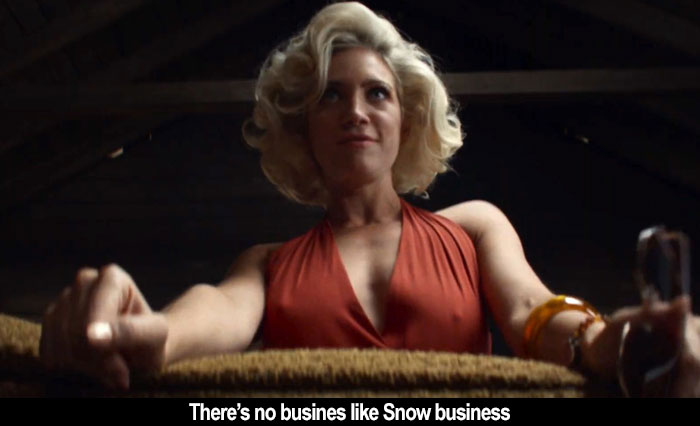 by Walter Chaw Early on in Ti West's X, a guy pulls out a guitar in the rented bungalow he's sharing with his buddies and starts playing a familiar riff. His girlfriend sings. She has a pretty voice. Not a world-shaking voice, but she means what she's singing, which makes up for a multitude of sins. It's a tough scene to pull off due to it being a set-up that's been paid off a few times, as it was in Animal House, by someone walking by and smashing the guitar against a wall. There are fewer muscles necessary to affect a snarky posture than to strike an earnest pose--less skill required to arch an eyebrow than to build a situation with fully-rounded characters we care about enough not to mock for their desire to connect with one another. How exactly, in 2022, do you do a scene where a group of kids performs "Landslide" without eliciting eye-rolls? Especially in a horror movie where a certain amount of superiority to the material is the expectation rather than the exception? Stevie Nicks wrote "Landslide" in 1974 to talk about a period of separation from her boyfriend and bandmate Lindsey Buckingham. An underestimated, perhaps superb lyricist, Nicks uses a natural disaster as a metaphor for both the violence and the inevitability of change over a lifetime: how she'll lose her looks to age, how she'll weather the tribulations of being in love in a temporary world. West shoots this scene without a hint of jokiness, intercutting the young folks at repose with elderly folks--their hosts--dressing for bed. The camera lingers on the sharp valleys and clefts of an old woman's back, casting harsh shadows in the moonlight. I expected many things from X, but I didn't expect it to make me cry.

The guitarist is "Jackson Hole," played by rapper/poet/model/impresario Kid Cudi (billed in X as Scott Mescudi), a purveyor of a lovely, moody, atmospheric rap style through which he openly discusses his struggles with addiction and depression. He released an album in 2018 with Kanye West called "Kids See Ghosts"--a delicate collaboration that lands at a hopeful place with "Reborn":

You don't have to know any of this to appreciate his performance here, but knowing it does help to explain the confidence and gravity he brings to the role of a man who's served multiple tours in Vietnam, seen terrible things, and is scarred for life. Now he finds himself in the middle of enemy territory again, shooting a porno flick with the girl he loves, Bobby-Lynne (Brittany Snow), for a director, RJ (Owen Campbell), who believes it's possible to make good--as in "artistic"--pornography. Their unctuous producer Wayne (Martin Henderson) does what he needs to get the movie in the can, including renting this guest house on a remote farm outside Houston from the ancient Howard and Pearl. (I don't think I'm supposed to tell you who's playing them, but they're both great.) Howard gets a bad feeling about the crew immediately (including boom-operator Lorraine (Jenna Ortega) and Wayne's girlfriend, Maxine (Mia Goth)) and tells them so, mumbling about how, in Texas, it's legal for him to shoot them if they're on his property and he doesn't like what they're doing. It being Texas, I think that's true. I also suspected the older couple wouldn't like what the kids are doing--and indeed they don't, though not at all for the reasons I assumed. X is smarter than me, gloriously so, undermining my expectations for a standard slasher plot much as RJ wishes to upend expectations of the standard stroke flick. Even one called "The Farmer's Daughters."

That title alone is smart--a nod to a dirty joke that often ends in the murder of the unfortunate travelling salesmen stupid enough to defile the eponymous daughters. We expect that Howard and Pearl are going to kill these people for shooting a skin flick on their property. Religion might be involved, certainly references to Tobe Hooper's The Texas Chain Saw Massacre and maybe Frederick R. Friedel's Axe. And sure enough. But then there are those sly call-outs to Hooper's Eaten Alive, first in a beautifully-conceived sequence where Maxine goes skinny-dipping in a pond on the property and takes her time out there, unconcerned about whether or not she's alone. West sets up the elements of his scare like a surgeon arranging his scalpels and bone saws. From a great height, we see her in the water and her watcher in the water as Maxine makes her way, luxuriously, to the shore. Yet the resolution of the scene isn't the resolution of the concept: West will return to this place later, with different characters, and the image of what we've witnessed here in the first 15 minutes of the film will come rushing back with a sensation very much like delight. All of X is set up this way: meticulously, lovingly. Consider a scene where Bobby-Lynne wipes come off her side in the afterglow of a successful money-shot for their porno, then demonstrates for the obviously smitten Jackson how, despite evidence of real ardour in pornography with regards to male ejaculation, the women are still by and large just playing a part. In a way, X is about climaxes, real and faked, and the suspension of ecstasy to the moment of explosion. West isn't the first to compare slasher flicks to porn, but he does so as a means of deconstruction rather than criticism. Musicals, action movies, and romances all consist of set-pieces designed to provide catharsis, written by writers, directed by directors, cut by editors, and ventriloquized by actors.

I said X is "about climaxes," though I think that playing around with payoffs is more the "how" than the "what." What's most affecting about the film is that it's about time passing and how that's the demon you can't ever exorcize--the body horror you are doomed to suffer, the bogey you can't outrun no matter how quick you are or clever is the path of your flight. Pearl surreptitiously watches our heroes shoot their sex movie and is reminded of the things she used to be when she was desired by men instead of repulsive to them. Unlike many movie maniacs, she's driven not to tell her tale or to avenge a past offense, but rather to rage against the dying of her light. When someone says something she doesn't like, she targets his throat. When someone threatens to see her as she is, she goes after his eyes. She makes for a compelling monster because her goal is to create an echo chamber in which she can exist without challenge as the person she still feels she is on the inside. "Make me feel beautiful again," she says to her husband. In a slightly different context, the request would be touching. It's still touching in this context. Lorraine mentions Psycho at one point as an example of a film that shifts tones in the middle, but I'm more struck by how Psycho is another film about voyeurism and an elderly woman's resentment of the sexuality of a young woman. West repeats a shot from Psycho in this film and pays it off in such a way as to lay bare the grievance of X's killer. I wasn't prepared to be moved by the respectful contemplation of an aged body early in the film, and I was equally unprepared for the emotional weight of a marital sex scene late in the picture that's played as a final expression of love before the curtain falls. We romanticize the first time you consummate a lifetime's loving relationship--not so often the last. X does that. At once a story of holding on to life and an expert and patient generator of tension, it's the true fruition of the incredible promise demonstrated by West's The Innkeepers and, especially, his The House of the Devil. X would be at home on a double bill with Cronenberg's The Fly, and that's the highest praise I reserve for anything.