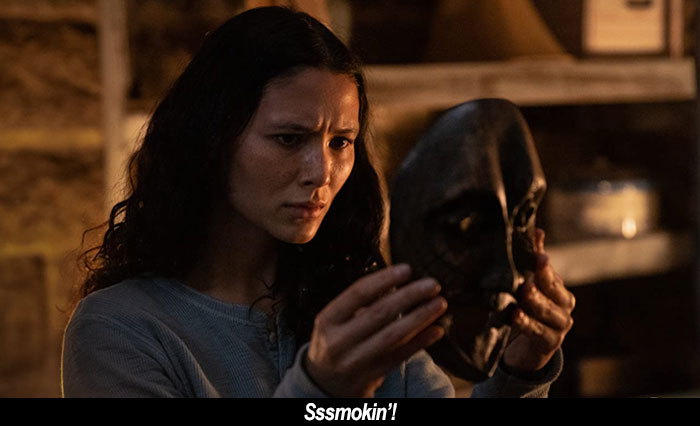 by Walter Chaw Sandra Oh is very good as a woman working through the generational trauma shared by many first-gen Asian immigrants to the United States. She's exceptional occupying a range of complex, polarized emotions, managing in many instances to pull off scenes headed towards histrionics with exactly the right amount of reserve to keep it south of camp. Consider when her amateur apiarist Amanda learns of her mother's death from a long-estranged uncle (Tom Yi), who appears on her doorstep unannounced. He disapproves of how Amanda's daughter Chris (Fivel Stewart), born and raised in the United States, doesn't speak a word of Korean, and he blames Amanda for causing her mother's passing by the fact of her absence sitting vigil at her deathbed. He gives Amanda a bundle comprising her mother's favourite things along with her ashes, telling her to provide her a proper burial, lest Amanda herself become as vicious and intolerable as her Umma (MeeWha Alana Lee). Oh keeps her emotions steady. She holds on to them like a drowning sailor. You can see the turmoil in her face, though it's carefully held, and when she tells him to leave, she does it without turning the table over. That's powerful stuff. There's an entire film here, a good one, that never goes to a supernatural place with Amanda's baggage--one that recognizes how strong Oh's internalization of this role is and lets her do it without things jumping out at her from the basement. The parts of Umma that explicitly fail are the horror-movie parts. It's not simply that they don't work, it's that making an Asian mother the literal monster in an American horror movie is absolutely fraught with representational landmines writer-director Iris K. Shim doesn't quite know how to avoid. Had a white creator made either this or the recent Turning Red, there'd be an uproar. A justified one.

Because it's not, Umma, if it's ever discussed, will be talked about as the personal experience of a person of colour telling their truth, even when that truth includes, say, a little girl turning into a red panda, or a castrating tiger mom archetype coming back from the dead to choke out ungrateful daughters with their burial hanbok. I think it's important for Asian storytellers in the diaspora to be able to use signifiers from the countries where their parents came from, but I also think there's a responsibility to provide cultural nuance for familiar tropes already appropriated by the West. Playing the same notes on the same instruments tends to validate, if not embolden, more of the same shortcuts and slights. The film's big "scare" moment involves Amanda--Americanized in comfortable work clothes, as befitting a single mother living in isolation on her bee farm and apparently allergic to electricity--showing up wearing a hanbok of her own on the porch swing. I understand this scene contextually, of course, yet there are two problems with it: either this is the oppressive mother possessing her daughter literally, or it's the demon mother possessing the daughter metaphorically. Visually, it's the equivalent of a film's bloodcurdling "sting" moment being when a Japanese-American woman shows up in a kimono. There's no good way to do this--not without first establishing, better than Umma does, how Amanda represents a different kind of motherhood when Amanda has essentially silo'd her kid off from the world in the hopes she'll be her partner in the honey-production business until they both die. It feels like Shim recognizes that her film may have lost control of its messaging as Umma tries to balance itself between ghost/possession story and Ordinary People. Well, Ordinary People with jump-scares and stock horror scoring. The uncertainty renders Umma both not scary and not emotionally lacerating. As is the case for most things that take the middle road, Umma is mostly just boring.

Chris wants to go to college; Amanda feels betrayed by this. There's a family friend, shop guy Danny (Dermot Mulroney), who gets the lines about how "you didn't think she'd stay here forever, did you?" as the representative of a good, white parental philosophy. Chris rebels, Amanda flips out, there's the slapping scene, Chris runs, Amanda chases, Chris finally unloads everything she was keeping inside, Amanda finally listens. We've been down this road. On the horror side: the scary dreams, the traumatic flashbacks, the music box, the lightning revealing shadows in the corner, the ghostly apparitions, the confirmation of haunting, the exorcism via cornpone ritual, the last-second rug-pull right before the smash-cut to black. Holding the two stock plots together in the most tenuous way is the introduction of intergenerational tension between old traditions and new ones, between an othered patriarchal system oppressing a woman's free will and this new patriarchal system oppressing women's free will in an all-American way. There's no consideration of how Chris will afford college on a beekeeper's salary, no consideration of how Amanda, who intends to build more hives to grow her business, might hire people when she's such a weirdo or grow her clientele when she doesn't even own a telephone. Danny is presented as a potential love interest, but his calming voice of reason against Amanda's coded unreason was hard for me to take. I'm on the fence, too, about how it seems like Korean culture is on trial here when American culture is arguably more fucked-up for being less a culture than a cannibalistic blood cult that worships money. What I'm saying is that Umma has Sandra Oh ready to dig into her feelings about surviving in a time and place designed for her to fail, and all Umma gives her to do is play out--and out of tune, to boot--this tired old "if it's not one thing, it's your mother" rag.