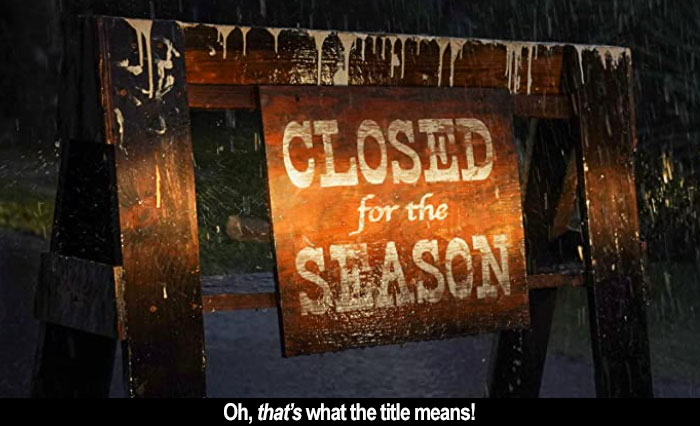 by Walter Chaw As her star-making performance in Ti West's exceptional The House of the Devil will attest, Jocelin Donahue makes for a compelling lead. She has about her something of Famke Janssen's quality of toughness that isn't undermined by a vulnerability. Lately, Donahue has shown up here and there, doing good work in supporting roles in big films like To the Wonder and Doctor Sleep and taking larger roles in smaller projects like Mickey Keating's Offseason, where her Marie is summoned back to the family reserve upon the desecration of a relative's grave. That should've been her first warning. Her second is the grizzled local colour--like the Bridge Man (Richard Brake), who tells her and her asshole boyfriend, George (Joe Swanberg), that the island they're trying to get to is about to have the bridge connecting it to the mainland raised for the season. "How do you close an island?" George wants to know. The better question is, will Offseason be able to lard Marie's guilt about her relationship with her dead mother with enough gravity to serve as a metaphor for an entire Silent Hill village's bargain with some nameless, Lovecraftian Deep One? And the answer is...complicated. I think a mother/daughter thing could have provided enough subtext had Keating been in better control of the story he's telling. The pieces are there, like a payphone receiver left off the hook and swinging for pregnant seconds, but the connective tissue seems to be missing, as in how that missed connection on a dead technology relates to Marie's inability to connect with mom Ava (Melora Walters) before Ava's death. I like films that eschew exposition, but what a film lacks in exposition it must replace with a persistence of vision. Without it, it's like when you drum out a "tune" with your fingers on a table and think that anyone else knows what you're playing.

Once they've unheeded Bride Man's advice, Marie also unheeds Flower Shop Owner's (April Linscott) warning, which plays as the bigger sin given how that warning is delivered in a creepy, fog-enshrouded cemetery. Marie is then separated from George for not a good reason and surrounded, briefly, by zombified townsfolk, who likewise materialize out of the mist. There are good images in Offseason that call out its sources, everything from James Herbert's The Fog to John Carpenter's (unrelated) The Fog to the mythic-apocalyptic works of John Windham to, most obviously perhaps, Lovecraft's The Shadow Over Innsmouth, already adapted as well as one could hope by Stuart Gordon's Dagon. The standout in the film's series of increasingly unfortunate events finds a mysterious Fisherman (Jeremy Gardner) beset by a tentacled practical effect called the "shoggoth"--but what should've been the moment where the film decides to be full-on Cthulhu Mythos (a direction underscored by a late "sting" cribbed directly from the innkeeper sequence from In the Mouth of Madness) is instead just another scene where the film favours atmosphere over thematic cohesion. I think what happens is Offseason loses its place a time or two and then just keeps going, like a cat who falls off the back of a couch and acts as though nothing happened. I wonder if it wouldn't behoove Keating to work with a screenwriter who isn't Keating.

A couple of overwrought flashbacks to Ava delivering violent, incomprehensible monologues to a despondent Marie attempt to fill in some blanks, but rather than deepening the pain of the schism between them, they provide cover for Marie's decision to cut Ava out of her life. If Offseason is intended as a statement on the unconditional fealty a child should pay an abusive parent, what it does instead is say that trauma is a life sentence the traumatized are helpless but to reenact. And if Offseason is, in fact, about how the influence of a bad parent extends from beyond the grave, then it's not clear what the isolated island community and the deal it's made with a sea monster are saying about that. Is a parent's abuse like an island you can't leave? I...guess? There's a cool scene inside a pub where everyone's frozen in place that could be about how an abused person is frozen emotionally at the age the abuse breaks the spirit and stunts emotional maturation. But then, what's the Lovecraft stuff? And the jumpscares--the townspeople in sway to a collective, and alien, consciousness? What we have here is an extended metaphor extended to the point of distention. Of course, you could say that Offseason is supposed to be moody and scary and there's nothing more to it--but then it would have to be more moody than gloomy, which it isn't; and it would have to be more scary than startling, which it also isn't. What I'm trying to say is that Offseason introduces a lot of ideas it doesn't land. It does, however, feature a great turn by Donahue, who deserves another film like The House of the Devil. I hope she gets one.