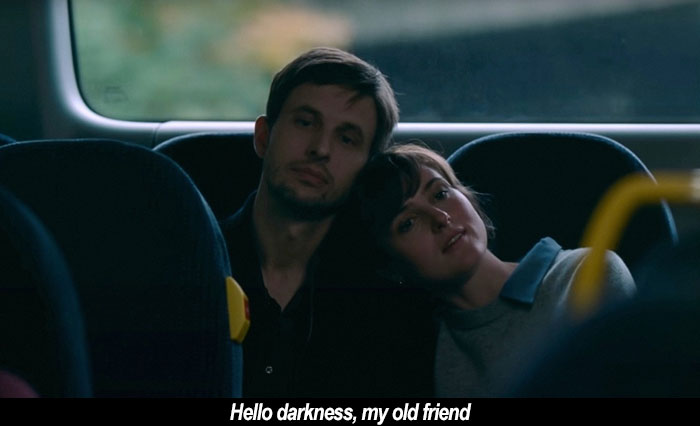 by Walter Chaw Joachim Trier has had his ear, unerring, pressed against the pulse of sweet melancholia and regret from the very beginning. He followed his first feature, Reprise, a downbeat essay of aspiring writers on the cusp of validation or immolation, with Oslo, August 31st, a jarring and indelible chronicle of one day in the life of a junkie trying for a second chance, maybe too late. Trier's English-language debut, Louder than Bombs, was about how a father and son remember their dead wife/mother differently, while his Thelma was a supernaturally-tinged coming-of-age film and my favourite movie of that year. Now comes this intense character study of the anxious generation, The Worst Person in the World. These films share an interest in people at a crossroads and forced to evolve. If I have a beef with Trier, it's that his endings of late have tended towards, if not tidiness exactly, at least a neatness not befitting his characters and their messy lives. It's less a failing of his than a failing of mine. I think what they do, though, these endings that feel like endings, is push his films a little away from realism and a little towards fable. The Worst Person in the World, accordingly, is a film through which it appears that Trier--32 at the time of Reprise, 47 now--is wrestling with what it means to be 30 in 2021 after providing such immediate and raw social landscapes in his early work. I wonder if fable is the only way to properly contextualize the young as we push into and past middle age. Maybe it would feel unseemly to pretend otherwise.

The Worst Person in the World opens with a wry voiceover talking about how med student Julie (Renate Reinsve, in the kind of role Joan Cusack would've nailed once upon a time), turned off by the "mechanic under the hood" quality of dehumanization necessary for a surgeon, decides she'll be a psychiatrist. Then, having decided that the other students in the program are silly young women with undiagnosed eating disorders, she develops other preoccupations. Her mom takes these gear shifts in stride, asking only for commitment to something--but, see, the only thing Julie is really committed to is not committing to anything. It's a collective, not personal, ethos, although The Worst Person in the World isn't the "OK boomer" snark about millennials and their screentime and lack of work ethic its opening scenes would imply. A lot more interesting than that, it's a deconstruction of our biases. Julie falls in love with underground comics writer-turned-legitimate mainstream graphic novelist Aksel (Trier mainstay Anders Danielsen Lie), a man ten years her senior who wants kids and a steady relationship. Julie avoids that conversation. She gets a job at a bookstore that she calls temporary but never looks for anything else. She does a little writing yet throws most of it away--with the exception of one piece about sexual fantasy and masturbation that she writes after crashing a wedding reception, to which she'd fled upon escaping one of Aksel's stuffy book launches. She pretends she's a doctor at said reception, where she meets a goofy young man named Eivind (Herbert Nordrum) and spends a breathless night acting silly and not cheating on her partner in ways so pointed and explicit that it's actually worse. Having split his film into ten chapters, a prologue, and an epilogue, Trier, because he's a little bit funny, titles this chapter where Julie does not cheat, "Cheating."

Life goes on, and then one morning, after another chance meeting Trier calls "Bad Timing," Julie imagines that the world and its people have stopped, suddenly--all, save Eivind and her, the only living creatures in Oslo for a breathless day to go with their breathless night. It's romantic and sad, as so many romances are, because they begin in the ashes of existing relationships and promises about to be broken. I was reminded in an emotional way of the Grand Central Station sequence from Terry Gilliam's The Fisher King, where the bustle of commuters during rush-hour coalesces in the imagination of one lovelorn man as a grand, choreographed waltz, with his lost "Ruth" wandering through this field of swaying corn. (Moments of magical realism crept into Trier's work with Thelma; he's so fucking good at them.) There's a conversation late in the game where Aksel asks if Julie is going to leave her new lover like she left him, because that's what she does, and Julie stands and moves away until she's backlit by a window. She's a shadow now, unreadable after these years we've spent with her, and it's Trier confessing his limitations as her confessor. We can spend a lifetime with someone, we can even create them whole cloth--and in a way, isn't that what we're doing anyway? What is it that drives Julie? She's not silly, nor stupid or lazy. The best scene in the film may be when she and Aksel spend a morning trying to break up, so she's not afraid of the difficult conversation. Okay, well what's wrong with her? If, indeed, there's nothing wrong with her, then what's wrong is all the things we're taught are "normal" in a society that, let's face it, isn't doing very well.

Marriage, children, a good job, owning a house--none of these things hold the key to happiness if you're not happy. Julie's piece on masturbation gets published at a prestigious outlet, and this does nothing to make her happier. It doesn't cement a new identity for her as a writer, doesn't begin to address the hole in her middle. In Rear Window, the artist across the way is working on a sculpture of a human form with a void in its torso. "It's called hunger," she says. Franz Kafka's "The Hunger Artist," as he dies, says that he would have eaten if he'd only found something he liked to eat. I think both of these templates are Julie. She is a creative force without a medium of expression. She doesn't want to be a muse, a silent partner; she tells Eivind that she doesn't mind if he follows his ex's Instagram account but doesn't want to be thought of as the safe, not-sexy, conservative choice. Eivind, kind but dull, doesn't know what she means. I think I do. Julie is awake. She is conscious of a culture that values nothing that she is good at and everything she doesn't want. Trier gives her a profession in the end and snuffs out all the little flames in her life that threaten to burst into conflagration. The Worst Person in the World suggests closure, though I wonder if what Trier means to suggest is settling. There's only so much fight any of us has before realizing that when we fight the machine, the machine has a way of winning. Even John Henry dies. Trier is incredible. We're lucky to be alive with him.