« Far from the Madding Cloud: An Interview with Iuli Gerbase | Main | The Worst Person in the World (2021) » 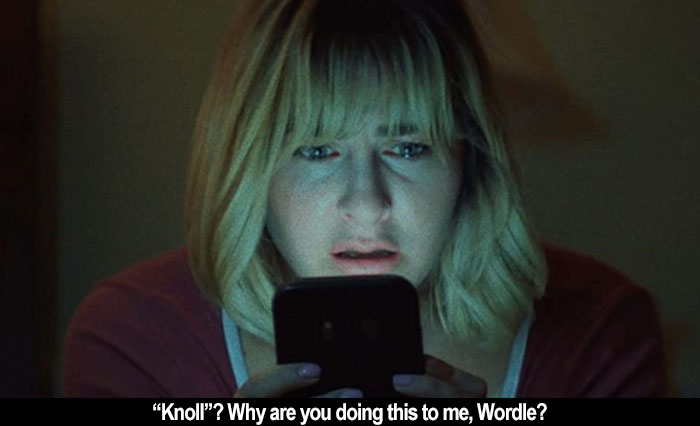 by Walter Chaw Rich Ragsdale's The Long Night is relentlessly familiar--which is too bad, because it features an excellent score by Sherri Chung, and DP Pierluigi Malavasi does yeoman's night-work and a mean drone shot. Their aptitude--indeed, elegance--is wholly at odds with the picture's smirky script (by Robert Sheppe and Mark Young) and solid wall of daft shoutiness. Star Scout Taylor-Compton spends so much of the picture shrieking, even before the bad things start happening in earnest, that the frequency of her hoarse emissions can be either the foundation for the world's newest and deadliest drinking game, or maybe merely The Long Night's most exhausting running joke. It's hard to say what this film wanted to be about, if it ever wanted to be about more than getting made--my obvious guess being all the supernatural doings as a metaphor for a disintegrating relationship. But if that's the case, that particular trope has been worn to a nub, and if you're not going to provide insight or approach it in a novel way, going through the motions really works the ol' patience muscle.

Grace (Scout Taylor-Compton) and her boyfriend/fiance Jack (Nolan Gerard Funk) visit the plantation estate of a long-lost relation in search of answers about her mysterious family history, leading to some bickering and a lot of flat jokes directed at southerners and rednecks. Soon, their phones go missing and the landline is full of loud static and Satanic promises, then the car won't start, then a group of hooded figures wearing animal skulls stands at the edge of the porch light and points at them. Folksy local colour Wayne (Jeff Fahey) swings by, and Deborah Kara Unger makes an appearance as a high priestess with a terrible secret, raising the question by their presence of why Fahey and Unger weren't cast as the central couple in the first place. Probably has to do with an evil-elder-god-forest-spirit-druidic-haunt-woods-demon-cryptid wanting to put its foul seed in a fecund womb, which leads in this Ari Aster/Rob Zombie hack-off to the Jodorowsky scene where a naked woman spreads her legs and a blinding light issues forth like that one Japanese sexploitation character. Everything goes as planned in a lockstep death march, chopped into chapter-headed chunks after the current genre fashion.

It's too bad the story is so uninvolving, given that in addition to the score and cinematography, the gore effects, when they finally arrive, are also good. Lots of strong work on a project that could've used fewer witty rejoinders, fewer callouts to Kubrick's establishing shots from The Shining. There's even a creepy gas-station guy who has nothing but contempt for the city mice wandering into this country trap. I liked the bit about the serpent in the garden and the suggestion of a snake crawling up naked legs, but the constant cycle of "it's just a dream...or is it?!" wears you out after a while. The Long Night is entirely forgettable genre fare that takes almost 20 minutes to get to where they find the Robert A. Burns primitive art installation and another hour before a gravid voiceover restates the plot just as a faux-feminist uplift moment sees Grace taking her first step, literally and spiritually, into a larger world. It's a film in need of some pruning, its desperation to be legible as a horror movie leading to this aggressive cribbing of what feels like everything that's come before it. As a calling card for the craftspeople working on it, however, The Long Night finds a tiny rationale for being.