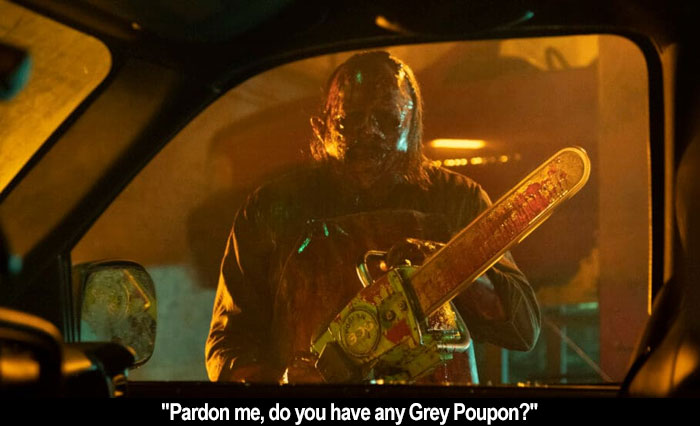 by Walter Chaw David Blue Garcia's re-quel Texas Chainsaw Massacre could've been a masterpiece with a minor tonal shift from deadly self-serious to wryly self-knowing. As it stands, it falls into the same Stanley Kramer pit as the Candyman reboot, where lectures take the place of plot--and infant cardboard pedagogues take the place of legible characters. Texas Chainsaw Massacre is the kind of graceless screed, in other words, that is everything its worst detractors accuse the original of being, making defending progressive messages in films like this difficult, if not impossible. Horror films in general--and Tobe Hooper's The Texas Chain Saw Massacre, in particular--are rich in subtext. Horror as a genre is primal (all of the Old Testament is an anthology of vile horror stories), and, as such, it's the first one to respond when toxins are introduced into our cultural ecosystem. Horror, for lack of a better descriptor, is potentially useful as both diagnosis of what's wrong with us and prognostication of the consequences, should we allow the poison in our systems to run its course. What's not helpful, however, are films that eschew subtext in favour of soapbox. If you empty the basement, your basement is empty. And if you enter into a thing with the idea that you're about to force people to get smarter, you'd better be sure that you're smarter than anyone who might want to watch your thing. Very few artists ever get away with being didactic.

Consider that this latest run at the franchise has as its inciting moment a group of twenty-something "gentri-fuckers"--as the requisite yokel (Sam Douglas) running the gas station colourfully brands them--trying to evict what they think is a squatter (Alice Krige) in the ghost town they've bought with the intention of auctioning it off as another roadside attraction. The questionable sheriff (William Hope), made questionable by the Texas Chainsaw universe (some incarnations of which see the Sawyer clan extended into local law enforcement), stops them just outside their destination of Harlow, Texas, to give a speech about the importance of the kids respecting the town. In case, you know, the meaning of "gentri-fuckers" isn't clear. As further insurance, the bulk of the subsequent dialogue given the meatbags (two of whom are "chefs," naturally) underscores their greed and essential vacuousness. "Behold the joys of late-stage capitalism!" declares head douchebag Dante (Jacob Latimore), and then it's revealed that goth Lila (Elsie Fisher) is the survivor of a school shooting and has come here at the encouragement of her "tough" sister Melody (Sarah Yarkin), who's operating under the delusion that this town, seven hours from anywhere, will be somehow good for Lila's recovery. It doesn't make much sense, so instead it becomes the shoehorn to fit school shootings into the picture's checklist of contemporary ills. Melody, for her part, comments loudly about how Richter (Moe Dunford) must have a "small dick" because he's open-carrying, prompting Richter to rant about feral pigs and how the only way to deal with an invasive species is by eradicating them. Like gentrifiers, amiright? Also, there's a Confederate flag hanging off the side of a building that everyone makes a big deal out of, thus immediately confusing whether we're supposed to feel bad for the inbred cannibals they're evicting or not.

None of it would matter, of course, if Texas Chainsaw Massacre didn't make clear that it's the only thing that matters--the only reading that's valid for a text that is incredibly rich with just the presented images, free of the social commentary that will immediately fix it to this stupid period in our history. Watching it is like sitting in front of the world-weary filmbro who won't shut up and is, besides, limited in how he interprets this movie by his own experience and education. Wouldn't it, in fact, be more fascinating if it were not clear, Deliverance-style (and, as it happens, The Texas Chain Saw Massacre-style), who the bad guys really are? It's too bad, because the first half-hour detracts from the incredible moments: the slaughter of an entire tour bus full of what we would've called yuppies in the 1980s (are they "crypto-bros" now? Poverty tourists? Venture capitalists?), the brutal chainsaw murders of one saviour after another, the decision by an avenging Sally (Irish actor Olwen Fouéré, replacing the late Marilyn Burns) to leave our new victims locked behind a cage in her truck as chum for Leatherface (Mark Burnham); Texas Chainsaw Massacre's got the goods, but it doesn't trust that it does. I'm even on board with the thought, which the movie shares with Soderbergh's concurrent Kimi, that trauma isn't a death sentence. Hooper's classic lays it all out, too, without overt dialogue chewing over Vietnam and Watergate. When it's not opening its mouth to justify itself, Texas Chainsaw Massacre works remarkably well as a mean little metaphor for generational trauma, for the things we've done to our children--what we sold them as success before sending them out on autopilot, destined to suffer and die as failures in the sterile wasteland of nostalgia and venality we've left as their inheritance. It's a movie about how fucked we are because we don't have any principles, and it works despite its best efforts to exorcise the visceral power of its nihilistic violence with sledgehammer pontification. Let the saw do the talking.