« Hellbender (2022) - Shudder | Main | Adams Family Values: An Interview with the Creators of "Hellbender" » 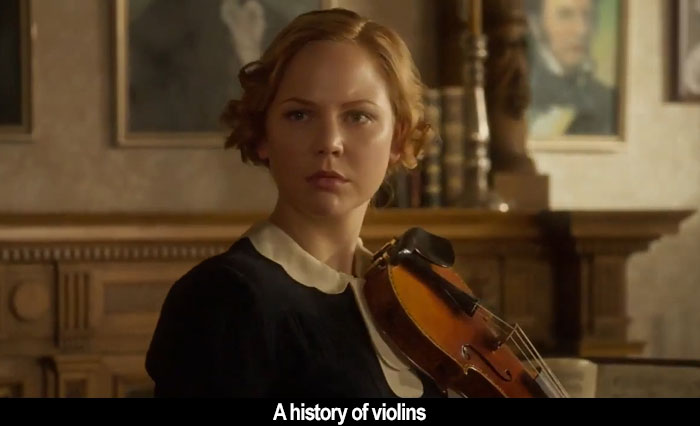 by Walter Chaw Martha Coolidge's I'll Find You, in distribution limbo since 2019, is a lushly-filmed but dramatically inert WWII period romance about a trio of starcrossed lovers and musicians, separated by war and reunited by amour. Coolidge does her best with the material, but movies that employ flashbacks to when the characters are children exchanging doe-eyed stares are a little doomed from the start, even when they're not also saddled with having to somehow use the Holocaust as a plot device that inconveniences our lovers for a while like a pesky ex-boyfriend or a dream job that requires a move across the country. Alain Resnais pulled it off ("it" being love in a time of war) in Hiroshima Mon Amour, and Philip Kaufman similarly succeeded with The Unbearable Lightness of Being, but this is deep and shark-infested water, the moral and practical perils of which I'll Find You never fully reckons. Take the scene where hero tenor Robert (Leo Suter) searches for lost love Rachel (Adelaide Clemens) at recently-liberated Bergen-Belsen, where Robert shuffles disconsolately past a "Warning: Typhus" sign that serves as a jolting reminder of the housing of human beings like cattle in what feels essentially like a zombified but expensive Jane Austen adaptation. I'll Find You sands all the edges off, which is fine some of the time but never okay when it comes to genocide. Coolidge is a spirited director, the driving force behind all-time classics like the thornier-than-you-remember Valley Girl and the deceptively jagged Rambling Rose, contorted here to helm what is essentially a Rob Reiner vehicle.

Robert and Rachel fell in love at first sight, but in the prime of their romance Robert leaves for two years to study with famous opera singer Benno, who's played by Stellan Skarsgård--that's right, Stellan Skarsgård. It's weird casting and a weird conceit, this weirdness unrelieved by some genuinely poor lip-sync. When Robert returns, he finds that Rachel is engaged to their mutual buddy David (Jacob Ifan), an incredible drip who must be dispatched, though maybe not how the film dispatches him. What's most unsettling about I'll Find You, I think, is that it's My Best Friend's Wedding but during the Holocaust. Anyway, just as Robert and Rachel are sorting it out with some very discreet and tasteful love-making, WWII breaks out, and, alas, Rachel is Jewish. She was planning on running away to Zurich with David when, oopsie-doo, the Holocaust. I don't know how to say this any differently: the reason I like Pride and Prejudice is that it's a work of absolute class and genius written during the Romanticist Period whose love story does not play out as foreground to a historical atrocity. Here, it's only after the war is over and our lovers find themselves in New York for some reason that the Holocaust becomes something like an Issue: someone sees the tattooed numbers on a survivor's arm and looks at them with pity. Traumatized? I'll say, but it's nothing a bit of fiddle-playing in Central Park won't fix.

Whatever its modest charms, I'll Find You is misguided at best and exploitative at worst. A centrepiece scene where Robert and Rachel are briefly reunited--he, the featured vocalist; she, the bedraggled Auschwitz prisoner enlisted to play first violin for the sadistic camp leader's orchestra--is meant to be a heart-rending moment of Francesca de Polenta and her lover Paolo from Dante's Inferno, buffeted in a whirlwind and forever in sight of each other without the ability to touch. Or maybe a better analogue is Orpheus and Eurydice, given the Satanic implications of this specific Hell. Whatever the intention, the sequence calls into question the wisdom of the entire enterprise. I'll Find You gave me the same feeling I had when I first saw Titanic: 1,517 people dying so teen love could blossom. Six million this time. The cast, the direction, the way it looks and sounds, all of these aspects are technically blameless; I'll Find You is a handsome and professional production that hasn't scrimped on the cosmetic details of the era depicted. And it's sunk entirely, for me at least, because it's as smooth and frictionless as a glass egg. Coolidge deserves better. We all deserve better.