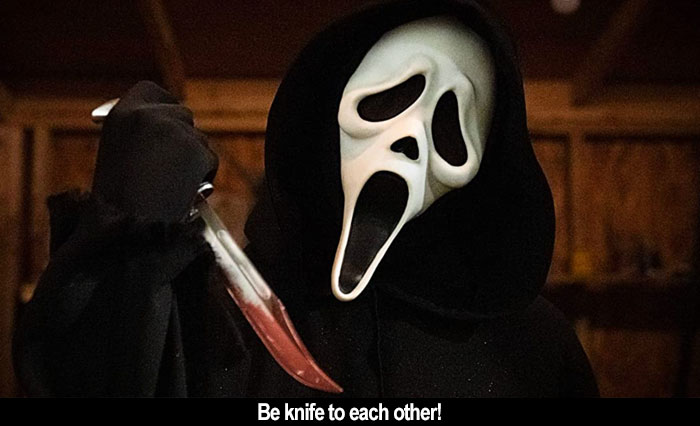 By the end of Matt Bettinelli-Olpin and Tyler Gillett's excellent continuation of the franchise following Craven's 2015 passing, the pressing question--the extent to which Sidney is aware that she herself is in a film--is explored with the kind of casual aplomb that speaks to extraordinary confidence on the part of the filmmakers, including co-writers James Vanderbilt and Guy Busick. Sidney certainly seems to know. Fellow returning regulars Dewey (David Arquette) and Gail Weathers (Courteney Cox) seem to know, too. Scream 5 is acutely aware of the "rules" to this game, i.e., what's expected of a sequel, and in the tradition of previous entries, it honours, comments on, and challenges those expectations while celebrating slasher fandom--even as it's clear that the fetishists among the fans have become dangerous in their loud and obnoxious impotence. Like any good Cassandra play, Scream 5 is about knowledge. The motive of the new killer or killers differs from the first four films in that it's rooted in neither the desire for notoriety nor some voyeuristic kink. It's not vengeance, not legacy necessarily--it's misdirected anger at horror being "taken over" on one side by the Morlocks who want their nostalgia gratified like spoiled children, and on the other by elitists who use terms like "elevated horror" when they find themselves accidentally liking a picture in a devalued (by them) genre. Scream 5 has disdain for the two halves of that coin, and the atrocities it portrays are the direct result of horror's gatekeepers. The picture's metatext becomes how the worst of the worst are now the fabricators of terror and pain, their power bestowed upon them by the masters of their objects of worship in exchange for a few pieces of silver. It's a smart picture not just for how timely it is, but also because it makes sense that the franchise would evolve to the point of criticizing the impulse that keeps the cycle of atrocity alive: how slasher franchises and branding women for the sins of their mothers might have their root in the same psychosexual clay.

But I'm getting ahead of myself. Scream 5 opens with teenage Tara Carpenter (Jenny Ortega), tough as nails despite her asthma, getting a wrong-number call on her landline and, against her better judgment, entertaining the voice on the other end until it's obvious the caller is a psycho. The subsequent stalking of her and assault on her body is horrifying and brutal, and the film announces itself as deadly serious about delivering the goods. Tara's estranged sister Sam (Melissa Barrera), her name a tribute to "Sam Loomis" from John Carpenter's Halloween (and Carpenter himself, natch), returns to idyllic suburb Woodsboro with nebbish boyfriend Richie (Jack Quaid) in tow to suss out who did it. Tara has a close-knit circle of friends--the sons and daughters, some of them, of characters from the prequels, and of course the prime suspect will be culled from among them. Veterans of the series will probably guess the murderer's or murderers' identity right away (there are usually two killers working in cahoots), though Bettinelli-Olpin and Gillett introduce enough red herrings to provide reasonable doubt. Eventually, word travels back to Dewey, now unemployed and living in a trailer; to Gail, who hosts a live morning show; and to Sidney, a mother of daughters doing her best to escape her past. I was more moved than I thought I'd be to see them reunited in a common, heroic cause. In ways both superficial and not so, Scream 5 is The Force Awakens for the slasher set.

The best scene in the film isn't one of the many superlative bloodletting passages, but rather the reunion between Dewey and Gail. Gail's angry because Dewey left her after she got her big break at a major studio, and Dewey's angry because he slipped away in the night like a coward. She tells him that he's anything but a coward, and he says that at least the mornings are endurable, because that's when he can watch her on television and imagine they have a life together still. Knowledge of Cox and Arquette's own real-life courtship, marriage, and subsequent separation add to the intense melancholy of a moment already elevated by the empathy of the script and performances from two actors who were never better than they are as these characters. Gail's belief in Dewey is what drives his courage in confronting the monster later in the film; his longing for her and regret concerning how the chips fell is what drives her courage to do the same. There are extraordinary depths to plumb here in terms of their relational dynamics, not just as franchise stalwarts but as human beings in the world, and as representations of larger truths about how we behave over the course of a long-term relationship. Scream 5 is on par with the original and perhaps just a half-step back from the second in that it challenges how one approaches horror movies not as mythology but as metatext. It wonders about the increasingly diaphanous boundary between what an audience desires and what a film feels obliged to offer in response, taking the position that the way to sickness and death--spiritual as well as creative--is to make pandering nostalgia instead of art. Sam wonders at one point if all these people are dying because of some stupid "fanfic," and Scream 5 answers that she is, that we all are. We're far along that downward spiral. This movie's so good.