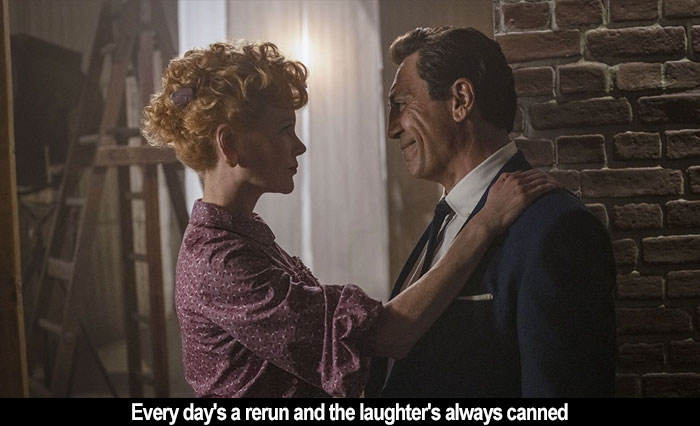 by Walter Chaw One of the best home viewing experiences I ever had was going through New Line's "Infinifilm" DVD of Roger Donaldson's Thirteen Days with my wife, clicking on every single prompt to view the voluminous supplementary material threaded through the picture and getting what felt like a freshman-level introductory course on the 13 days of the Cuban Missile Crisis. An old and dear friend here in the Denver Market threw his hands up while we were talking about Aaron Sorkin's Being the Ricardos and asked, rhetorically and not to an imaginary Sorkin, "Why Aaron Sorkin?" It's a great question. I think the "why Aaron Sorkin" is that he is the human manifestation of the "Infinifilm" concept but less educational and more facile and self-indulgent, hence populist in the worst way. That is, populist in a way that seems prestigious but is, in fact, playing to the groundlings-infested pit. Emboldened perhaps by the success of the David Fincher-directed/Sorkin-scripted The Social Network and the Bennett Miller-directed/Sorkin-co-scripted Moneyball, Sorkin's directorial efforts so far--Molly's Game, The Trial of the Chicago 7, and now Being the Ricardos--have all been based on true stories. Maybe he figures he's hit a rich vein of biopic dramaturgy that he can strip-mine until this mountain is just a pile of rubble littered with Oscars. Sorkin is a slick one-trick pony, that guy. Giddyup, cowboys. 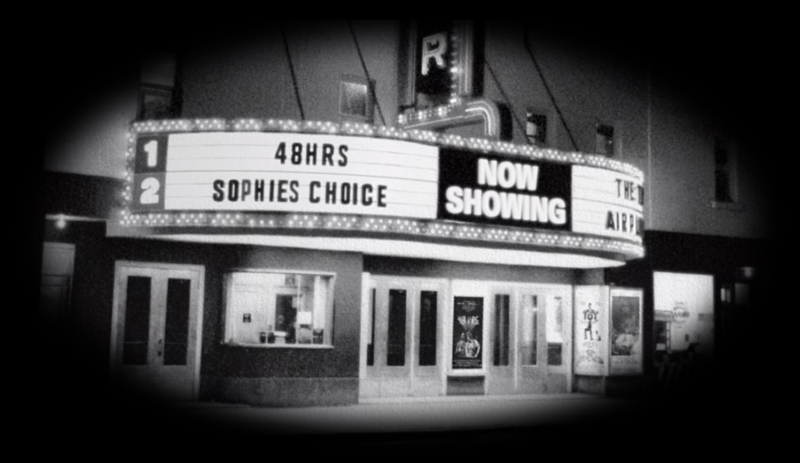 Heads up! This past Monday Netflix launched "Voir", a new 6-part series produced in collaboration with David Fincher. Featuring visual essays on film from a variety of Internet-based critics, "Voir" wraps up its first season with an episode written, produced, and narrated by none other than our own Walter Chaw. In "Profane and Profound," Walter takes a close look at Walter Hill's 48Hrs., which launched the movie career of Eddie Murphy and cemented the "buddy-cop genre" as a staple of '80s cinema--even though, as Walter points out, "buddies" hardly describes what Murphy's and Nick Nolte's characters are to each other. Directed and edited with gusto by Julie Ng and Keith Clark, Walter's essay is an astonishingly fleet, funny, occasionally goosebumps-inducing treatise on race in America, much like 48Hrs. itself. (It's also the perfect teaser for Walter's upcoming book A Walter Hill Film, due out in 2022.) I can't review "Voir" proper, obviously, but "Profane and Profound" left me buzzing with pride, and plentyofcritics have singled it out as a series highlight. I hope you'll get a chance to watch it over the holidays if you haven't already.-Ed.

SDAFF '21: Wheel of Fortune and Fantasy

by Walter Chaw Ryusuke Hamaguchi listens well. His films may be indicated by the denseness of their dialogue, their patience in allowing their characters to speak it, and his trust in his actors to do unbroken takes and in his audience to go along for the ride, but what enchants about them is how carefully they hear what their characters are saying, and how they invite us to do the same. At some point during each of Hamaguchi's films, I've found myself leaning in--not because the mix is too low, but because I'm socially conditioned to lean towards a speaker when they're saying something that's at once difficult for them to say and imperative that they say it. I'm giving these characters eye contact and attention. Hamaguchi's movies are a form of communion--that is to say, a connection that touches on profundity. Given their intimacy and wisdom, they hold within them the capacity to rip my guts out. Which they do, remorselessly and sweetly. Does that describe the concept of "winsome"? In "Magic," the first of the three short films that comprise Hamaguchi's Wheel of Fortune and Fantasy, beautiful Tsugumi (Hyunri), in the back of a long cab ride with her friend Meiko (Kotone Furukawa), describes a platonic first date in which she and her partner "caress" each other with their words. Not "talk dirty," she clarifies--getting to know the other person by telling the truth when lies are expected. Through Tsugumi, Hamaguchi is talking about his process.