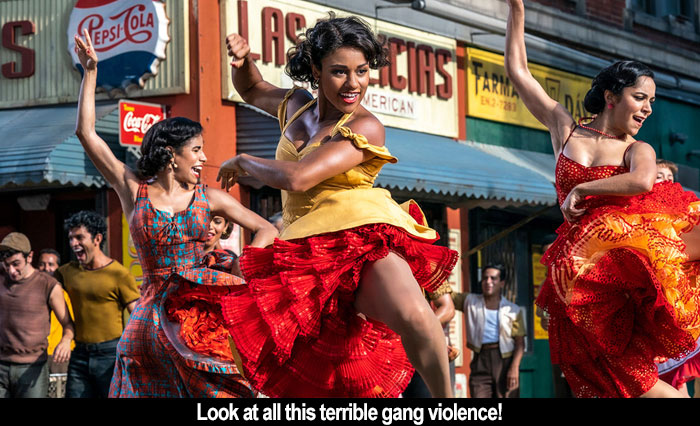 by Walter Chaw West Side Story is the perfect vehicle for all of Spielberg's prodigious strengths while deemphasizing his obvious weaknesses. In that way, it reminded me of another Stephen Sondheim adaptation, Tim Burton's Sweeney Todd, wherein a savant-like visual artist is paired with a genius for storytelling, plotting, and characterization. It occurs to me that every single Robert Wise film would be better had Spielberg directed it. This isn't because Wise butchered The Magnificent Ambersons and betrayed Val Lewton, it's because he played in the same sandbox as Spielberg and no one has ever been better at building those particular sandcastles. There's a scene in Indiana Jones and the Last Crusade where Spielberg, with a drumbeat gathering power on the soundtrack, transitions from a sign at a crossroads pointing to Berlin to a book burning in a public square. Kind of like the ones they're organizing in central Virginia right now. He does it again in A.I. in the lead-up to the Flesh Fair. The combination of action and the rising thrum on the soundtrack is...visceral? Yes, that; kinetic, too. Chills-inducing. He uses the tactic again in the build-up to the "Mambo" number as Anita, Bernardo, and Maria arrive at the school gymnasium for the big dance. You hear the music, muted, through the doors, and then they're thrown open, and Jerome Robbins's ageless choreography explodes with all the furious vibrancy a collaboration between Jerome fucking Robbins and Steven fucking Spielberg promises. It's a synesthetic representation of life and youth, ridiculously effective. We speak of spectacle films and the magic of "big" movies--I don't know that I've felt a film's scale like this in decades. All of this West Side Story's showstoppers are just that. They are alive and fresh, and Spielberg gets that when you have a Robbins or a Fosse or an Agnes DeMille, your job is to dance it like your shoes are on fire and let us see the bodies from head to toe. There is possibly no better visual storyteller in the history of movies than Spielberg, who finds in this partnership with great artists alive and dead the truest fruition of his gift.