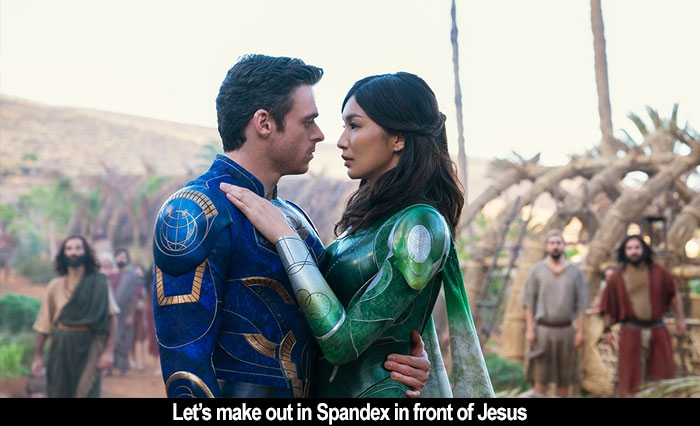 by Walter Chaw Chloé Zhao's follow-up to her Oscar-winning Nomadland is one of those movies that is more interesting to talk about than to watch--which, in the final analysis, may be the poet laureate of South Dakota's most distinctive auteur hallmark. Despite that it's the twenty-some-odd instalment of the Marvel Cinematic Universe, Eternals is defiantly a Chloé Zhao picture, and the amount of subversion required to make it so highlights both MCU overlord Kevin Feige's desperation to shake the diversity monkey off his back and his fatal lack of understanding of women creators at the most rudimentary level. In theory that doesn't matter much if all these folks are asked to do is direct the parts that aren't generic action scenes, committee-generated in the house style and dropped into the middle of whatever flaccid drama is possible under the narrative conditions like dead paratroopers into a live warzone. What you see in Eternals is a result of what feels less like a partnership with its attendant compromises than like a quiet war waged in the spaces between a boss who thinks he knows what's happening and a hired gun who's pretty clever about having her way no matter the amount of oversight. By the third or fourth laborious exposition dump by the least comfortable, least seasoned and natural actor in the loaded cast (that would be 14-year-old Lia McHugh), it's pretty clear that Zhao's empathy for unaffected performers rambling in lingering magic-hour landscapes has won the day. Good one, Zhao.

by Walter Chaw Will Sharpe's The Electrical Life of Louis Wain is not quite the sentimental, broadly-appealing quirk-fest you might be fearing, largely because it has a strong sense of its own absurdity and maybe even a respect for how tired we are of this crap. Though it stars Benedict Cumberbatch, the patron saint of biopics about iconoclasts like Louis Wain, its most valuable player is, as is so often the case with her, Claire Foy. She plays Emily Richardson, nanny for the younger Wain sisters and, after a funny courtship, the happily-ever-after'd Mrs. Wain. This is a bit of a scandal, their nuptials, because Louis is a gentleman and Emily is working-class, but they're happy, and while they remain childless, they do adopt a cat. That's unusual, since housecats weren't really a thing in Victorian England. So infatuated are the Wains with their fur-baby that Louis, an inventor and illustrator and maybe a genius, starts drawing cats doing people things, partly to pay the bills and partly to distract himself from the fact that Emily is dying of breast cancer. Another complication? Louis is so hopeless at managing his affairs that he's neglected to copyright his paintings, and a cottage industry of Wain's cats springs up without benefiting him in the slightest.