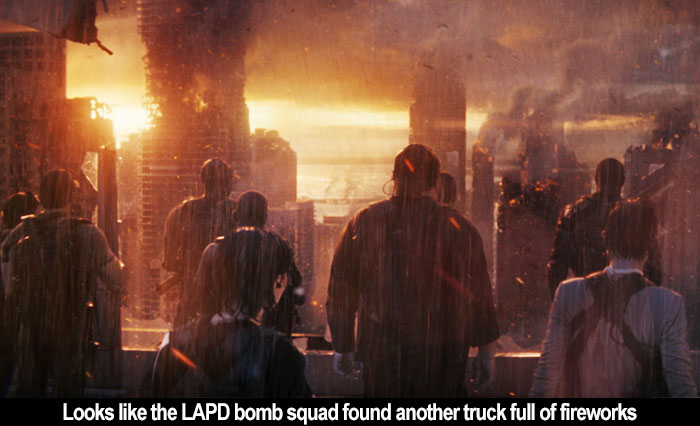 by Walter Chaw Not to be confused with Joe Haldeman's classic 1974 novel The Forever War, Chris McKay's super-stupid The Tomorrow War doesn't bear up under the slightest prodding yet demonstrates an admirable agreeability to "sciencing the shit out of" part of its solution while dealing, however rotely, with its father/son and father/daughter abandonment themes. Pratt, whose Q-meter stock has fallen because of a few public missteps, proves an affable presence as science teacher-cum-future soldier Dan Forester, enlisted by future soldiers into fighting the tomorrow war against thorn-tossing, bugbear monster things dubbed "White Spikes." See, in 30 years or so, humans are down to their last half-million and need people from the past to bolster their ranks. But doesn't that create some temporal anomaly problems? I'm very glad you asked. Yes, it does. That's why they only recruit people who are going to die within a decade anyway, which is either an incredibly stupid plan in its looseness or an incredibly cynical plan that presumes none of these people will procreate again within the next 10 years--or, you know, otherwise do something that will fuck with the future in an unexpected way. Maybe they've accounted for all that and simply don't share. Or maybe it's like that Mark Hamill anecdote about how his hair should have been filthy and wet for a scene shot out of sequence but meant to follow the trash-compactor escape in Star Wars: As Harrison Ford sagely informed him, "Kid, it ain't that kind of movie." 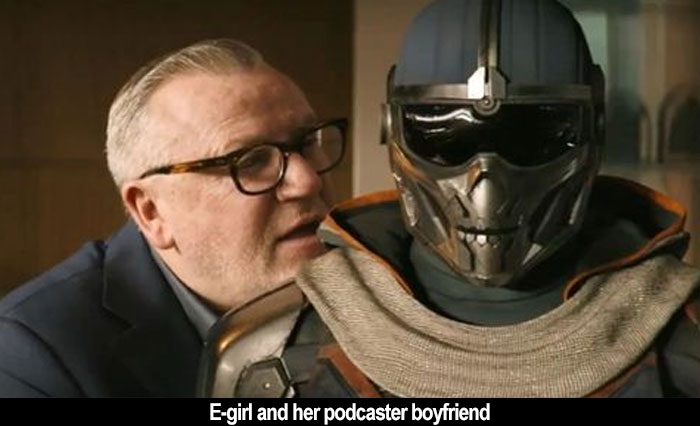 by Walter Chaw You know it's gritty because of the gritty cover song interrupting the bucolic prologue--Think Up Anger ft. Malia J's "Smells Like Teen Spirit" this time instead of Rose Betts's "Song to the Siren." Too on the nose, perhaps, although they're both pretty on the nose, let's be honest. Another clue is a montage under the opening credits that shows rows of little girls abducted not for sex trafficking (because Marvel is more comfortable suggesting sex trafficking than, you know, consensual adult eroticism), but for the purpose of creating a Whedon-fantasy team of Dollhouse assassins. I spent most of my childhood reading comics and have watched and reviewed almost all of the MCU films to this point. I've seen none of the TV/streaming shows and don't intend to remedy that because life is incredibly short and also full to bursting with things I desperately want to see that I still won't be able to, no matter how smart I am at managing whatever time I have left. I have no idea what's going on in Black Widow, and I think that once you get bucked off this horse, there's no getting back on. So here's Cate Shortland's Black Widow, the 24th MCU flick, if only the second centred around a female protagonist--one we know has sacrificed herself for the sake of the least interesting/worthy of her male counterparts, meaning this one takes place in either the past or an alternate timeline or something. It doesn't matter. In the comic-book world, there are new #1s every few cycles that are reboots or speculative storylines or something. It's how they get you to keep buying them. What matters is, the more you humanize this character you've already made abundantly clear you don't really care about, the worse her already-loathsome sacrifice feels.