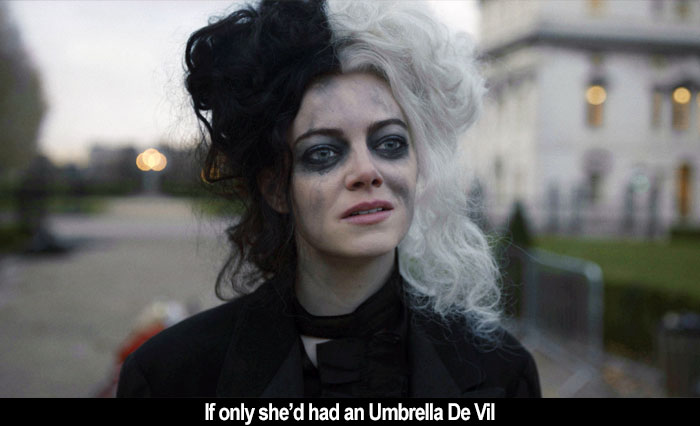 by Walter Chaw It's better to think of Craig Gillespie's Cruella as a riff than as a prequel--a variation on a theme rather than the puzzle-box predecessor to a beloved intellectual property. In fact, one's ability to do so informs the extent to which this film is not merely enjoyable but indeed good. Cruella is a mindfuck of a construct, a postmodern exercise in which nothing of it could cohere without knowledge of, and experience with, other cultural artifacts--but even there, it occupies two spaces simultaneously: the Disney side, where the references are all to 101 Dalmatians, against the Gillespie side, where the references are to pop-cultural movements in music, fashion, even literature. Early on, a young Cruella (Tipper Seifert-Cleveland), born "Estella," is urged by her saintly mother Catherine (Emily Beecham) to contain Estella's exuberant, sometimes-violent and "evil" side by dubbing her "Cruella" and, in so naming it, caging it. The suggestion, then, is that "Estella" is the polite-if-constricting requirement that Cruella be a prequel to a Disney "vault" classic, while "Cruella" is the Something Wild barely contained that, like Michelle Pfeiffer's resurrected Catwoman in Batman Returns, is a creature born of violence returned as the avatar for perversity and chaos. Imagine how great this good film would have been were it just the one with none of the other. FILM FREAK CENTRAL turns 24 this month and I became curious what our 24 most-read reviews might be. Unfortunately, we didn't sign up for Analytics until 2014, and any record of our traffic before then has evaporated from the Internet. So, uh, here's a countdown of our 24 most-read reviews since, um, 2014. Few surprises on here (longtime visitors to the site can probably guess what took the #1 spot, with 147,457 reads), but definitely a head-scratcher (#6) or two (#20). Perhaps the biggest takeaway? No Marvel. DC is another matter entirely, though. Thanks again for reading and supporting us!-Ed.