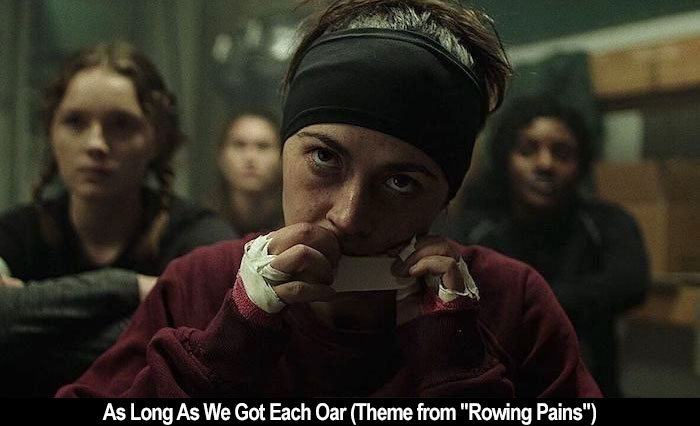 by Walter Chaw Lauren Hadaway's hyphenate debut The Novice is so good, so self-assured, so kinetic and so very much about something that, all hyperbole justified, it heralds the arrival of an important new artist. Garnering instant comparisons to Whiplash for its heart-attack-fuelled kineticism and hyperfocus on the obsessive, gnostic practice of an obscure discipline and to Black Swan for similar reasons as well as its troubled female protagonist, The Novice's closest analogue for me is actually Andrew Niccol's Gattaca, a film about the pursuit of knowledge and sublimity free of the depressingly quotidian limitations of the body. The Novice itself is free of Damien Chazelle's preening and the literalness of the hero's emotional fracture in Black Swan. Rather, it preaches the gospel of being fine with who you are not despite how fucked up and "intense" you might be, but because of that. At the end of all that auto-excavation, it says that the self, whatever its attendant flaws and hardwired weaknesses, has intrinsic value, and the knowledge of that value comes with immeasurable power. The title of Hadaway's film recalls the Christian concept of the religious "novitiate," that period where a person called to servitude enters into intense study, constant prayer, forced brotherhood, and an invasive interiority, all to prove whether or not they will be welcomed into the fold. In The Novice, the novitiate is Alex Dall, and the "fold" is everyone at her school who thinks she's some kind of freak.

See, Alex (Orphan's Isabelle Fuhrman, mesmerizing) is a Physics major at a chichi university not because it's her best subject, but because it's her worst. She decides to join the University's crew team because she's never done it before; for Alex, easy familiarity is death. In one of several devastating sequences, Alex tells her girlfriend, Dani (Dilone), that they both knew there was an end date to their romance when they started it. (The script is exceptionally wise on top of being duck-ass tight.) The Novice floats the idea that a life lived authentically includes not simply comfort with discomfort, but an active seeking-out of activities that lie outside one's comfort zone as well--the literalization of the thought that everything one desires is just on the other side of fear. In a pool hall one night, Alex tells a long story about a classmate she despised and the self-destructive lengths she went to in order to score better than him in school. The point of it is not the meaninglessness of their competition and the outsized toll it took on her health and sanity, but rather the exhilaration of having a target to hit and the scars to prove the trial. There is a mythological element to the assigning of labours to prove worth, something Kierkegaardian in the supposition that it is only through gruelling and repetitive labour that one finds meaning, even happiness, in an otherwise meaningless existence. Anyway, Alex joins crew and starts taking notes on technique ("arms-body-legs" a whispered mantra Hadaway layers into the soundstage) and doing calculations around weight's effect on drag while marking aspirational averages and benchmarks to destroy. She knows people think she's a psycho--but at least, or so she believes, she has their respect.

Late in the film, a former ally tells her that Alex in fact has no one's respect, and Hadaway shows Alex's pain dawn on her face like the twilit sun spreading across a river before it blinks out into night. Alex blinks, and with it, Hadaway and Fuhrman communicate that Alex must choose whether to continue to measure herself against others. What most impresses about The Novice and Hadaway as a young filmmaker is the extent to which she trusts her collaborators. Trained in sound design (she was a sound editor on Whiplash, as it happens), she trusts DP Todd Martin to find the visual representation of her story's emotional beats, composer Alex Weston's now-lilting/now-menacing score to rhyme them, and Fuhrman's self-professed obsessiveness to bleed into Alex until it seems less a performance than an exorcism. I love how Alex mortifies her flesh with a pair of cuticle scissors to the slightly-warped strains of Peggy Lee's "I'm Sorry," and how the act, paired with the performance and the song, mix into this glorious expression of rage, self-loathing, and shame on the one side, release--relief, ecstasy--on the other. The Novice is a film about "ecstasy," after all, the root of the word ecclesiastical, speaking of "ex stasis," of standing outside of the body when inspired by the holy spirit. In Alex's ritualistic pursuit of the best time, she's taught rote and rigour, like saying the Rosary, or whirling like dervishes, or whipping oneself. It's only through the transcendence of the flesh that one discovers the spiritual. Over the course of her devotions, Alex grinds the skin from her palms in an imitation of the Stigmata--a revelation strengthened by the ripping of her side. She is a martyr to her labours. Her Passion is to carry her boat from boathouse to watercourse by herself in the predawn, in wind and rain, in literal and numinous murk and lightning.

Most of all, The Novice is a work of defiance, a roadmap for rejecting the judgment of others along with the little achievements that are supposed to provide satisfaction and an identity but do nothing for the soul. It's Hadaway's manifesto for embracing the truth about yourself, however conventionally ugly and unacceptable. Alex is captured throughout the film in claustrophobic environments. During one argument, her head is ever in danger of smacking into the Dutch angle of a low ceiling. When she's in the thick of a heat, the environment around her goes black and closes in. Her world is squeezed down to a pinhole. Hadaway counters Alex's point-of-view with objective shots of her exhausted, drenched, gliding along a crystalline surface and taking a breath to look up into the sky. It's the pose of religious genuflection, though it's more than that: It's the ultimate explanation, Martyrs-like, of why casting our gaze upwards is the universal expression of bliss. Alex is addicted to bliss, although she thinks she's addicted to struggle. The opening image of the film is straight down from a great height, where the toothpick-thin boat spins like the hands of a clock or the needle on a compass. The Novice is about finding direction, and finding it before it's too late. Alex's last act is to reject time--and as she peers into a new world unbound, she breaks the fourth wall as a challenge to us all to do the same. I'm ready. Let's go.