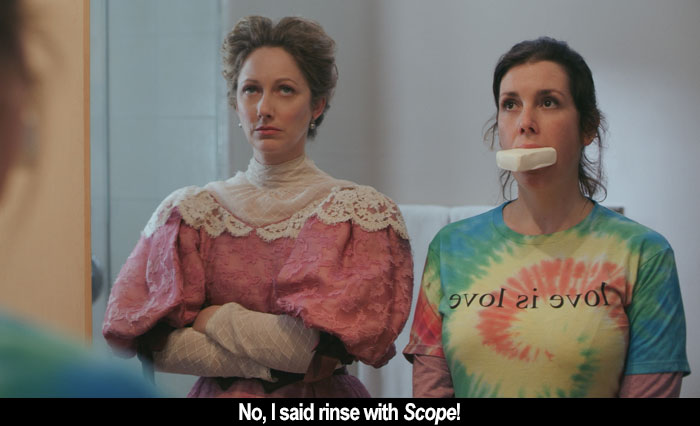 by Walter Chaw The first perky, jaunty violin strokes in the oppressive score announce exactly the kind of garbage Justin and Christian Long's Lady of the Manor is going to be: self-satisfied, high-concept comedy that apes Neil Jordan's High Spirits and Jared and Jerusha Hess's Austenland while entirely wasting Melanie Lynskey and Judy Greer. I would watch Lynskey and Greer in anything--and Lady of the Manor tested me sorely, immediately, repeatedly. Its execution is '80s VHS Screwballs quickie tossed together with cheap gags, an overreliance on fart and dick jokes, exaggerated in-camera effects, and skits that fall flat and don't stop falling for at least ten or twenty beats after they've died. They were dead before they got there. There are montages that are just expository scenes strung together and there's a running gag where Greer is asked to shake her head disapprovingly while Lynskey sucks on a bar of soap and shrugs. There's another where Greer makes "silly" faces in a mirror for a long, long time to demonstrate how she misses her friend and also how maybe she's loosening up, and it's unbelievably painful to watch someone so brilliant and naturally hilarious shoehorned into a square hole as stolid and unforgiving as this. Admittedly, it takes actual talent to make something this terrible. I mean, you can't do it accidentally.

Lynskey is Hannah, a burnout drug courier busted in a sex-offender sting who finds gainful employment as a tour guide for the Wadsworth Manor playacting as one Lady Wadsworth, the ghost of whom (Greer) haunts Hannah disapprovingly. The ward of the Manor is vile Tanner (Ryan Phillippe), who hires Hannah to replace the girl who rejects his attempts to sexually harass her, mainly because he's desperate but partly because Hannah is very happy to fuck him. Lady Wadsworth doesn't approve of such shenanigans and goes about "finishing" Hannah so that she might better represent her and, oh my god, I just...do I have to keep...? Okay. The caretakers of the manor are brother and sister Marcus (Wallace Jean) and Nia (Tamara Austin), and that they're Black is never questioned for a moment, not by the terrible white people nor by Hannah or Lady Wadsworth, who, in the film's exciting climax (it's not exciting), is revealed to be a progressive champion of reparations. Yes, Lady of the Manor has a message! That message is that if a movie's script is bad enough, two of the most engaging and charming people on the planet will still not be able to save it. Check out the outtakes during the closing credits, by the way. Lynskey and Greer are fucking hilarious.

Joe Carnahan's own throwback Copshop is considerably better, mainly because it chooses to rip off stuff like Assault on Precinct 13 and Tales from the Crypt: Demon Knight--oh, and its vibe is Tango & Cash or The Last Boy Scout: everything I like in a small-environment thriller married to all the bombast of a '90s Shane Black vehicle--and just as inappropriate and ugly as that sounds. Here, Teddy (Frank Grillo) punches Officer Young (Alexis Louder) in the face in order to get arrested and stuck in a cell opposite Bob (Gerard Butler), who feigns drunk likewise to get arrested. Teddy wants to be in the slammer because, as a canary turned on the mob, hired killers are hunting him down. But Bob is a hired killer. Standing between them are Officer Young and a small precinct full of bumbling cops--one of them particularly crooked--and then, just as all hell breaks loose, another killer, the psychopath Lamb (Toby Huss), appears with a clutch of balloons and a cornpone accent. What follows is a lot of cop murder, a lot of pithy one-liners and acts of bravado, a subplot about how every cop save Young is either bad or incompetent, and then a final shootout where Young, despite the pains Copshop takes to establish her as a resourceful badass, needs a white dude to bail her out.

Whatever. Copshop is super stupid. If it's interesting, it's only interesting because it is the walking simulacrum of attitudes and approaches to this material that are now about 30 years old and nostalgic for old people like me who thought Con Air was exciting and envelope-pushing when they saw it in the theatre in their twenties. Teddy is the victim who is not to be trusted; Bob is the Midnight Run bounty hunter who can be trusted a little bit; and I am the person who spent most of Copshop's runtime thinking of other movies I haven't seen for a long time but would like to revisit once this one plays itself out. Huss is fantastic as a psycho with a suitably Grosse Point Blank air about him, and...all I'm doing is listing off other movies. There isn't a lot of there here, is what I'm saying. Copshop is four people in a room with guns and shifting allegiances, and that's all. When it looks like there's going to be some subtext to mine off the bone, it turns out to be a false alarm, and the main thing I'm leaving with is that this is a handsomely shot and professionally executed flick that, if it helps make Louder a star, will have been worth it. And for Carnahan fans who are curious, I also liked Boss Level.