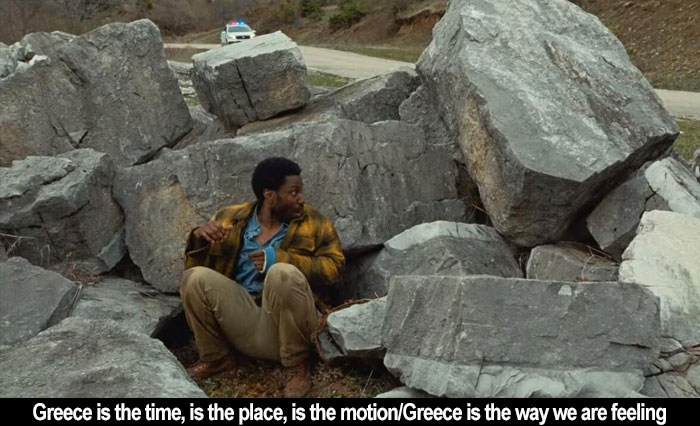 by Walter Chaw SPOILER WARNING IN EFFECT. It's obvious what Ferdinando Cito Filomarino is after with Beckett: a 1970s paranoia thriller in the Three Days of the Condor vein. And it's just as obvious that he misses the mark. Beckett isn't even a prestige knock-off version à la the Peter Hyams remake of Narrow Margin. Lots of reasons for its failure, chief among them that it doesn't have a point of view; landing somewhere in the junction between a "wrong man" thriller and a film about a truth-seeker finding more truth than he bargained for makes it all seem arbitrary. To be clear, not arbitrary in the sense that what's happening to our heroes is meaningless (a capricious universe is the fodder, after all, for great paranoia)--arbitrary in the sense that the film itself has no real reason for being, and that's a hurdle very little art can overcome. It's a hurdle that not even great cinematography (by Sayombhu Mukdeeprom) and a Ryuichi Sakamoto score can ameliorate. Instead, they underscore how top-heavy it all is. Great cast, too, scenic locales--everything top of the line. But there's nothing mooring it to relevance, despite all its arched-eyebrow pipe-smoking about the state of Greece and American interventionism.

Find more evidence that Beckett doesn't really have any idea what it is in the fact that it's named after its main character, Beckett (John David Washington), a tech analyst on vacation in Athens with his girlfriend, April (Alicia Vikander). Beckett never once demonstrates any special skill beyond being able to take more bullets than is plausible and sprint up the side of a mountain minutes after checking himself out of a hospital. Beckett is named for a completely ordinary person, and yet the film is not about his ordinariness. It's not about his extraordinariness, either--about how this could happen to anyone, because surely we are not John David Washington in peak fighting shape traipsing around Europe with Alicia Vikander. And it's not about some former firefighter/cop/green beret/assassin activated by the death of his beloved. It's all just random stuff that happens to someone we don't relate to, meaning what it's about is about two hours.

Two hours of dialogue like, "I'm having a love attack, currently," and, "No one knows we're here, we're just two figures in a landscape." The first part of the film is so desperate to establish how the lovebirds are head-over-heels for each other that it plays hilariously like that scene in old war movies where some bumpkin shows off a picture of his sweetheart while talking about the farm they're going to build together when he gets back home. There's no nuance to it. It's saccharine-sweet, tooth-achingly sweet. Of course their idyll is interrupted by a terrible car accident wherein Beckett accidentally sees something he isn't supposed to, thus making everybody in every position of authority very much want to kill him...though not enough to kill him once they have him in custody or, even better, while he's unconscious from his wounds and his death could be easily legitimized. How about this? Just kill him at the site of the wreck after you realize he's exposed that which should not be exposed? Why didn't they do that? Before she croaks, April does seem a little fixated on the Oracle of Zeus, to the point that she's written something on a little pad she keeps on her hotel bedstand: "What does the Oracle say?" This suggests that her dragging Beckett to Dodani might have something to do with a desire to visit this Oracle. She'll later tell Beckett as much. In The Odyssey, Odysseus consults the Oracle for guidance on whether or not he should return to his Penelope in disguise, which could reference back to how Beckett now needs to return to Athens to try to find help from the American embassy. I'm doing a lot of work here for no real return on that investment. None of it matters.

Much would be forgiven if the action were thrilling or imaginative, if the pacing were breakneck, if the outcome were ever remotely in doubt. Beckett proves capable enough in hand-to-hand combat to defeat trained killers, thus placing Beckett as some kind of fantasy for tech analysts. (Ditto that he's dating Alica Vikander and able to afford a luxury trip to Greece.) Right after the accident, Beckett calls April's parents to tell them something terrible has happened, and her parents promise they're going to be there as soon as possible. Does this mean they showed up and are now dead? This is the worst episode of "The Amazing Race" ever. I should mention, too, that Vicky Krieps pops up briefly in a perfunctory Children of Men sequence as a protestor/activist on someone's side about something or other, and she provides Beckett a couple of deus ex machinas when he can't generate them himself. Krieps is good because she's always good. Washington is also good because he is also always good. Greece is beautiful! What were we talking about, again?