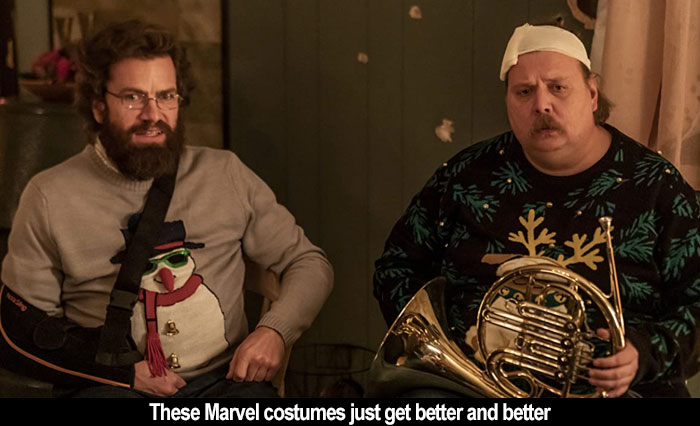 by Walter Chaw Dogma 95 vet Anders Thomas Jensen has a particular interest in oddness. Characters, especially, in Jensen's films as writer and director are given to sometimes-extravagant eccentricity, fueled by traumas Jensen declines to sanitize that are often exacerbated by intelligence worn as an unwelcome birth defect. Consider the menagerie at the centre of Jensen's Men & Chicken, an updating in a way of The Island of Dr. Moreau reconfigured as a "light" family drama in the Danish countryside. Mads Mikkelson stars in that one, too, playing a chronic masturbator who finds out that his father has been splicing his own sperm with animal sperm in an attempt to... Well, look, it's an interesting piece about social norms and how an inability to assimilate culturally leads to these islands of misfit boys. Jensen is interested, specifically and obsessively, in what happens when physical and mental mutations stunt emotional and social development. Though no one would want the crown, he is the poet laureate of the incel state.

Riders of Justice at first glance seems like a departure for Jensen. A terrible accident claims the life of a biker thug turned state's evidence on the eve of his testimony against the brutal Riders of Justice gang, led by vile Kurt (Roland Møller). Alas, the same accident kills the wife of Markus (Mikkelson), an innocent bystander who was taking her daughter Mathilde (Andrea Heick Gadeberg) home after her bike got stolen and their car subsequently broke down. I mention these little details because Riders of Justice also features a trio of weirdo probability theoreticians, one of whom, Otto (Nikolaj Lie Kaas), witnessed the accident and believes it was no accident at all. When he goes to the police, they ask for proof and Otto points to numbers. "Numbers don't lie," he says. Somewhere towards the end of the movie, Otto admits that although numbers may not lie, he doesn't know what to ask them--the numbers--to illuminate. When the police reject him as a crank, he goes to Markus, who, in his grief, believes everything Otto says.

For a while, Riders of Justice is a bit like a Viking The Limey, with Markus demonstrating his skills as an emotionless "soldier boy" in fits of rage directed at the right targets, i.e., the bikers, and occasionally the wrong ones, like his daughter's boyfriend, Sirius (Albert Rudbeck Lindhardt), a gangly kid with good intentions who's done some reading on trauma and urges Markus to see a shrink for his tendency to approach everything with violence. "How does a baker deal with anger?" Markus asks Sirius. When the answer proves unsatisfactory, Markus nods, "Oh, it's that kind of theory." Sirius means well, but his understanding of human behaviour is based on hope that humans are better than primates. Markus knows that humans are only primates driven by a couple of basic urges; right now, Markus is driven by homicidal bloodlust. He invites Otto to live with him and Mathilde. Otto invites his colleagues, Lennart (Lars Brygmann) and Emmenthaler (Nicolas Bro), to help. They tell Mathilde that they're crisis counsellors sent by the state to rehabilitate Markus and Mathilde after their sudden loss, and so Riders of Justice for a while becomes a clumsy slapstick sitcom of concealed identities. An extended sequence in which the deeply-disturbed Lennart engages in a "session" with Mathilde is not only not funny, it's actually horrifying. I suspect this is by design. I mean, Jensen is just a slightly more socially-acceptable version of countryman Lars Von Trier.

The image of Markus as the tip of the spear of a gaggle of maladjusted nerds doing his bidding is delicious. He beats and berates them, ordering them to find the alleged malefactors and get out of the way. For their part, Brygmann, Bro, and Kaas are extraordinary as these genius-level outcasts, each burdened by unimaginable horrors and still finding in one another meaningful support and the only intimate relationships they'll likely enjoy for the rest of their lives. I was fascinated by Emmanthaler, in particular, a corpulent, petulant man-child throwing tantrums and demanding "advanced weapons training" who pines for the days when he wore a uniform as part of the school marching band and felt, for a moment, the sweet sting of belonging. I think the problem I ultimately had with Riders of Justice is that, like so many of Jensen's films, it sees devastation as an allegory or a fairy tale where happy endings are possible in a traditional sense rather than in a negotiated, equivocal sense. While the inciting event is unimaginable, the resolution is...trite? There's so much good in this film, and then there are things like the humiliation and betrayal of characters like Sirius: the smugness of those teen years where one knows everything is indeed insufferable, but surely not so insufferable that it should be met with sadistic punishment. Riders of Justice, in other words, isn't entirely in control of what it's talking about, though its pleasures are so pleasurable that it almost, almost doesn't matter.