**/**** Image A- Sound A- Extras B-
screenplay by Len Blum and Lorne Cameron & David Hoselton and Karey Kirkpatrick, based on the comic strip by Michael Fry and T Lewis
directed by Tim Johnson & Karey Kirkpatrick 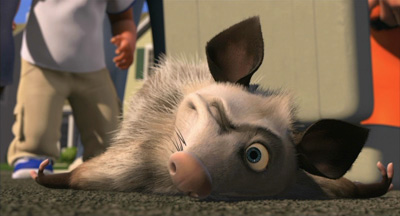 by Walter Chaw It's just a largely inoffensive, vaguely environmentalist (inasmuch as being anti-sprawl is pro-environment) assembly-line animation featuring the usual passel of aging and/or second-run celebrities subbing for trained voice performers as anthropomorphic CGI animal bodies engaged in slapstick, stink jokes, and other interchangeable ephemera for the delight of our toddlers. If you feel as though you've seen Over the Hedge a hundred times already, that's because it's been cobbled together from a hundred other identical pictures; and if you have a little trouble afterwards remembering a thing about it, well, it's only natural that something with no nutritional value would pass right through you. That's not to say there's no fertile ground to be mined here in exploring the line between the natural-natural and the human natural (a line that the Japanese puzzler Pom Poko attempts to describe to similar effect)--safe to say, in fact, that a great satire lies in the suburban morass as viewed through the eyes of the "un-civilized." But Over the Hedge is a slave to the theoretical peanut gallery, resorting to manufacturing a villain and then staging a series of boom/crash operas. Though Pixar's Cars can pretty fairly be described as awful, it's Pixar's legacy of brilliant children's entertainments that DreamWorks has tried to ape with its puerile, art-destroying, post-pop Shrek series, and if Over the Hedge at least resists the scatology that marks Shrek as low entertainment for the lowest common denominator, it still can't quite make that jump from loud noises to real insight and value.

RJ (voiced by Bruce Willis) pisses off a bear fresh from hibernation (Nick Nolte, typecast), who makes him an offer he can't refuse by ordering him to restore his winter stash, toot sweet. So our hero enlists a gaggle of good-hearted, dim-witted wildlife (including a skunk (Wanda Sykes, typecast); a frenetic squirrel (Steve Carrell); a hilarious, William Shatner-voiced possum; and turtle/conscience Verne (Garry Shandling)) to infiltrate suburbia, liberate various and sundry foodstuffs, and generally put their hides on the line to save his. RJ is to learn a lesson, of course, and comeuppance to is to be had by not only the bear but also the evil head of the local HOA, Gladys (Allison Janney), and the Wallace & Gromit-borrowed ace exterminator, The Verminator (Thomas Haden Church). Both truisms lead to the downfall of a picture that simply did not need a villain besides the encroachment of Man into the wild.

An early sequence is spot-on brilliant as RJ introduces his charges to the excesses of human existence, which lie in stark contrast to their own subsistence, hardscrabble lives. Humans are seen as worshipping at altars of food; if only the picture had followed these observations through to the big box marts and gas stations, it might actually have had something to say. Alas, all it ends up doing is tap-dancing around a Persian character and setting up the skunk with a cat so inbred it's lost its sense of smell. When the film is funny, it's funny that way: not insightful, just sort of grotesque, leading to the inevitable conclusion that it's fun to watch animals do people things and almost get smeared by propane tanks, and not as fun to consider how many opportunities they're missing in a film with this premise. Consider especially the usefulness of junk food as a Pavlovian prod (and how Dr. Phil might be junk food for the soul)--how completely these animals give themselves over to the sway of trans fat, carbonation, and processed sugar. (More, how these trifles are packaged in lovely arrays of irresistibly intoxicating packages and colours.) There's a real movie in there somewhere about pods and the food industry. Shame that Over the Hedge's only real presence is that it's part and parcel of the same excreted legacy. Originally published: May 19, 2006.

THE DVD
by Bill Chambers DreamWorks presents Over the Hedge on DVD in competing widescreen and fullscreen editions; we received the former for review. Though the slightly-windowboxed 1.85:1, 16x9-enhanced transfer doesn't raise the bar for CG productions, neither does it fail to meet expectations for a brilliant, glitch-free image. A bit of softness seems to fall in line with co-director Tim Johnson's mandate that the picture look like film, but shadow detail is lacking in a way that's less artistically defensible. The accompanying Dolby Digital 5.1 audio is punchy and clear, if again not quite up to the standards set by Pixar discs--the THX demo within the film is timid compared to the real thing, kind of ruining the joke. On another track, co-directors Johnson and Karey Kirkpatrick join producer Bonnie Arnold for a pleasant if unessential feature-length commentary. While most of what they say gets repeated, albeit in condensed form, in the disc's documentary supplements, the stray anecdote--such as the one about Nick Nolte's Method dedication to researching bears--is worth a sharp-eared listen.

The remaining extras are organized on a clever but potentially confusing vending-machine interface that gives preferential treatment to promo reels for upcoming DreamWorks productions over things like a chapter menu, which is buried under "DVD Setup." Going across the rows, first up we have DreamWorks' shameless attempt to turn Hammy into their own Scrat-like mascot, Hammy's Boomerang Adventure (5 mins.), with optional commentary from director/poached Disney animator Will Finn. A spoof of nature videos "shot" by the characters of Over the Hedge in which Hammy (Steve Carrell--all of the original vocal talent returns) + boomerang = slapstick, it's irrevocably stilted by the P.O.V. gimmick no matter the amount of alleged "Tex Avery style" animation on display. Next comes "Bee Movie" (1 mins.), wherein Jerry Seinfeld, dripping with condescension, pitches his post-"Seinfeld" animated opus to the littl'uns--or people forced to wear helmets. "DWK" stands for "DreamWorks Kids!" and features a typical assortment of juvie ephemera: "Learn How to Draw Hammy" (11 mins.), hosted by supervising animator David Burgess (who probably goes too fast for children); "Critter 411" (4 mins.), pop-up facts about the various species featured in Over the Hedge; and the lame games "Backyard Obstacle Course" and "Acorn Toss." Falling under Gratuitous Menu Selections, "In Hibernation" simply reminds us to visit the DreamWorks website.

"Behind the Hedge" is divided into sub-sections. The titular featurette (12 mins.) delves into the project's origins. Having never read T Louis and Michael Fry's comic strip, the discrepancy between its aesthetic and that of the film came as quite a surprise--there's no real reverence for the drawings, only the jokes, and the designs were subjected to further polish after a few critters were set loose on the DreamWorks compound and the artists realized their renditions were not as cute as the genuine article(s). "Meet the Cast" (16 mins.) finds Kirkpatrick treading on a political minefield by seemingly equating skunkdom with the black experience, but fun footage of William Shatner in the recording booth ("He's like a knob you can dial!" marvel Johnson and Kirkpatrick, with no trace of irony) goes some way towards making amends. "Verm-Tech Informercial" (3 mins.) weakly uses clips from Over the Hedge to pad out the self-explanatory parody, while "The Tech of Over the Hedge" (6 mins.) tries hard to convince us that PDI's innovations are as exciting or cutting-edge as Pixar's. (The fact that they trumpet hardware providers HP and AMD underscores their rivalry with Pixar, a company working from Apple technology.) Last but not least, under this "Behind the Hedge" umbrella: another link to the commentary; character design, package design, set design, sketches, and storyboard galleries; and trailers for Wallace & Gromit: Curse of the Were-Rabbit, Madagascar, Charlotte's Web, Nacho Libre, and Barnyard. A thoroughly superfluous preview for Shrek the Third (expect no footage from the film, just detailed recaps of its predecessors) rounds out the platter, with a semi-forced trailer for Flushed Away cuing up on startup. The keepcase contains a bonus sheet of Flushed Away stickers plus coupons for Chuck E. Cheese. Originally published: October 18, 2006.