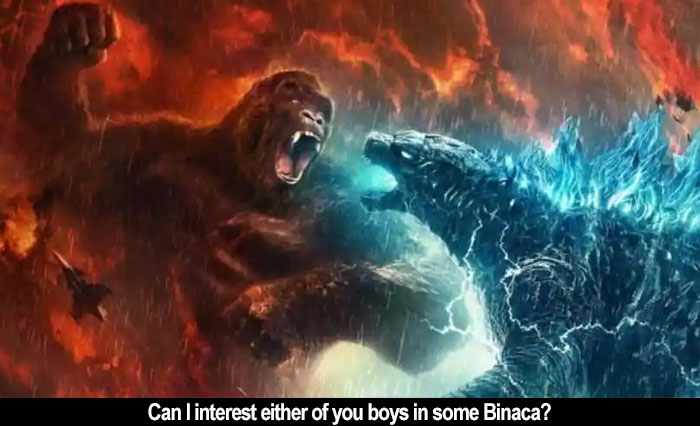 Kyle Chandler and Millie Bobby Brown return (probably? Who can remember?) as a clenched-jaw dad and his conspiracy-theory-addicted daughter. There is currently a conspiracy epidemic in the United States, but this film makes light of how young Madison (Brown) listens to adorably nutty Bernie's (Brian Tyree Henry) podcast about how the evil corporation run by evil billionaire Walter Simmons (Demián Bichir) is involved in nefarious shenanigans. Madison and her buddy Josh (Julian Dennison, Ricky Baker of The Hunt for the Wilderpeople), whose dynamic plays like a less-natural-seeming Peter Parker/Ned Leeds pairing, decide to track Bernie down and do so easily because Bernie showers in bleach--the better to erase biological trackers, right? But a Black man showering with bleach should be something more than a throwaway bit of quirky business, shouldn't it? And should Bernie really be doing a Mr. Yunioshi accent through a closed door to throw his quarry off his scent? Are these things permissible now? Maybe Asians are all fish-mongers and comic relief in your universe, but not mine.

This trio--the hero girl, her schlubby ethnic buddy, and the crazy Black guy who thinks a tech center they discover would make a great DJ booth--are meant to provide some kind of access into the corporate malfeasance portion of the plot, but that presupposes a plot to access. Access denied! Not helping is the tortured script by Eric Pearson and Matt Borenstein, tasked as it is with handling all of the lore of the "Monsterverse" and all of the lore of the Toho Godzillas, plus setting up future instalments and managing notes from the committees in charge of movies like this, which are only interested in protecting their investment. When casting minorities in all supporting roles, however, it's important to realize you're not doing something new through representation, but in fact doing something very old in careless stereotyping and tokenism. Consider the little deaf girl with a mystical connection to King Kong, Jia, played by newcomer Kaylee Hottle. She's the last survivor of Skull Island's human inhabitants, who were the most outwardly problematic part of previous Kong films. While all credit is due for casting a hearing-impaired actor to portray a hearing-impaired character, for me much of that goodwill is squandered by a vague racial depiction that has only evolved from frankly bigoted in previous incarnations to somewhat paternalistic in this one. It's not meaningful progress. It may actually be worse for its "good" intentions.

Jia is used as the conduit between the humans and Kong. In one of a few giant, CGI-heavy set-pieces in the film, she convinces Kong to go down a tunnel that leads to the Jules Verne-ian centre of a hollowed-out earth. What does one find there? Story inconsistencies and a magical axe that functions, The Rise of Skywalker-like, as a Tomb Raider key for an ancient doohickey-whatsit the film's eggheads, Nathan Lind (Alexander Skarsgård) and Ilene Andrews (Rebecca Hall), variously describe as indescribable. It's blue magic. (Godzilla has blue magic, too.) They drill a hole to Hong Kong (which is perilously close to the old jokes about digging holes to China) and knock down a bunch of buildings, and then there's that thing where Walter Simmons's evil daughter Maia (Eiza Gonzalez) sends a special code about the blue magic to her dad so he can activate the Mecha-Godzilla he's been building, which he has a Japanese kid, Ren (Shun Oguri), pilot because...it's a mecha and Japanese people...pilot mechas? Immediately after transmitting said code to daddy, Maia gets murdered, but this does not bother daddy. In all this bloat, there should've been time and room to be better than this. The key to enjoying GvK is that you must not think much about it as you're watching it--and certainly not after and probably not before, either. The trick is to accidentally find oneself watching it and then, as one is doing so, pretend one is not, so that one might enjoy the experience. It's like an advanced yoga class, or Douglas Adams's instructions for flight: when you fall, miss the ground.

Watching earlier entries in either series is not only not a prerequisite to pleasure--it's an impediment to it. Watching other films, period, probably injures the experience as well. GvK's only function is to be rated against its brothers and sisters and then championed jealously or resented pathologically--less an art object than a make-believe girlfriend two lonely boys have imagined at the same time. I want to call out an early scene where Kong, in giant shackles on the deck of a boat, is shown trailing his hand in the water to the tune of "Loving Arms," a song first made popular by Kris Kristofferson and Rita Coolidge, but made beautiful and lilting by Dobie Gray the following year. One of its lyrics has the lovelorn singer long for "the freedom of my chains." It's a pretty song made devastating with a Black singer--something like the trick Tarantino pulled off in Django Unchained by associating Jim Croce's "I Got a Name" with his enslaved hero breaking free and getting, for the first time in his life, to choose his own clothes. Context matters. In this context, behold western culture's crowning metaphor for fear of a Black planet, make him docile and tranquilized, in chains, on a boat; this is the song you choose to drop a needle on? It's one thing to be ignorant of what things mean, or that they mean anything, another to be so willfully ignorant you've now become dangerous.

What can be said in GvK's favour is that the special effects are indeed affected and that there is a lot of punching and spitting (albeit without much in the way of stakes attached). The rooting interest here isn't the unlikely eventuality of one defeating the other, but rather that they fight so the people parts mercifully stop happening. The lighting for the Hong Kong battle is a beautiful evocation of how Chinese filmmakers have been shooting Hong Kong for decades now. You're welcome. It's considered an offense to suggest that a film like this be about something: To request meaning in entertainment is the province of the joyless, not the joy of the substantial. GvK is a defiantly anti-intellectual, bullying entertainment engineered for inoffensiveness (despite being built on incredibly loaded storylines) for the bombastic glorification of itself. Some will say it's better on the big screen in the way that a terrible band might be preferable live because at least live, one is deafened in the company of drunkards. That may be so. If that sounds like a good time, have I got a movie for you.