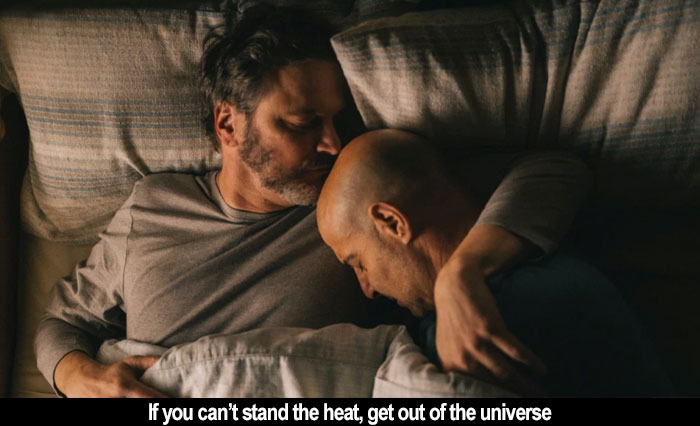 by Walter Chaw Tusker (Stanley Tucci) is an author of some minor renown who has a way with a toast and a loving, if sometimes crabby, relationship with his husband, Sam (Colin Firth). Sam is a concert pianist of even more minor renown whom Tusker teases at a diner along the route of a holiday they're taking in the English countryside by telling a waitress that Sam will be glad to sign an autograph for her if she likes. It's clear the poor woman doesn't have the first idea who Sam is, but she's very polite about it. Sam asks why Tusker does things like this when Tusker admits that half the time he doesn't get any joy out of it. Tusker says, "For the other half of the time." In his film Supernova, writer-director Harry Macqueen's script is consistently like this: understated, beautifully observed, intensely human. It's a two-hander with two of the absolute best actors on the planet, so how much script and direction do they need? However much it is, Macqueen gives them just enough. I love the way Sam says "Tusker" like "Tosca," the Puccini opera, but I love it because that's the way, accent or no, your name will evolve with your partner over a life together. It's not a nickname, it's a secret language. After 24 years, no one says "Walter" like my wife says it. It's subtle, but I hear it. I know the contours of it in her voice like I know the curve of her hip when I sleep next to her. The film opens with Sam and Tusker bickering, first about a map, then about what station they're listening to. When Donovan's "Catch the Wind" comes on the radio and Tusker, to cool the tension a bit, cajoles Sam into singing along, well, I fell in love with them. Tusker and Sam are real people.

That's what makes what's happening to them so hard. John, my father-in-law and the finest human being I have ever known, died a few years ago from complications related to dementia. My sweet mother-in-law Alice was claimed a few months ago by the same horrific disease. Who are you when you don't remember who you are anymore, or where you are? What happens when everything becomes difficult and embarrassing and all of your relationships with your loved ones begin to change? I have a plan that should I get this or another wasting disease, I will kill myself while I can still make that decision of sound mind. I can't put my family through that ordeal. I already live in fear and anxiety and I can't do it to myself, either. I can, however, be brave enough to self-select. I can do that. I don't judge you for what you will do, and I loved my in-laws and was grateful for every minute I had with them. Tusker has dementia, and it's getting bad. He spends his nights writing in a little notebook, his next big work, but it's not going well. One day, on the road, while Sam is in the grocery store, Tusker disappears with their dog for a few panicked hours. Supernova takes us inside the recriminations and self-loathing Sam goes through for leaving Tusker alone. It's complicated, right? Tusker isn't a child, after all. He'll be mortified, if Sam overreacts; he might be defensive, or terrified. In Tucci's hands, he's all of those things in sequence and all together. When Sam prepares dinner for them later, he takes a second in the tiny space of their camper to hide in the bathroom to sob. He doesn't want Tusker to see how scared he was, but Tusker knows. Of course he knows.

They go to the lake for a couple of nights and remember how immediately they fell in love. I fell in love with my wife immediately. I thought about that when Tusker and Sam embrace, looking out over the water. Macqueen shoots them from a bit of a remove, though, and I thought about how a different choice here would have seemed more romantic than what it is, which is tragic: what started for them here is ending. We know, before Sam acknowledges it, that this isn't a holiday Tusker plans on coming back from. They go to a dinner party that becomes a surprise celebration for...what? Tusker's written a toast and finds he can't get through it and hands it to Sam. This is hard, because most of it is about Sam and how wonderful he is. I don't know what I would do if my wife had me read something like this in front of our friends. I don't think I'd be able to do it without inserting self-deprecating jokes. My conditioning, my adaptation, is to hate myself so that I'm easier to accept. My default is diminishment. Sam soldiers through it, and I found that I had been crying not from the beginning of this speech, but through the entirety of the film. Supernova is unsentimental but not brutal, tragic but not cruel. It is a mass of gorgeous contradiction because it listens to how people talk: how people mean well and make mistakes; how people try not to hurt the people they love the most but only really ever hurt the ones who have a stake in their well-being.

Supernova is about choices you make at the end of your life and about how relationships are a responsibility you undertake to be present for another person who, if you're lucky, has taken on the same responsibility for you. Naturally, there's love. And every relationship is a love story and a tragedy, since every relationship ends. Macqueen tells everyone's story as a journey for Sam to play a lovely, quiet chamber piece on stage for the first time in a long time. He's distracted about it, nervous. Tusker complains that Sam never plays him his favourite piece, and I guess I don't know if that's true because Tusker's memory isn't what it used to be. He's chosen on this trip to stop taking his medication, too. He tells Sam it's because he knows it's not working, and he doesn't want to be reminded of his illness during their time away together. He says that, yet I'm thinking he's hoarding his pills so he has an easy way to kill himself. It doesn't matter either way, and Supernova isn't about the details, the exploitative possibility of Tusker's death. Instead, it's about these last days they spend talking, arguing, laughing, kissing, huddled together on their little pull-out bed like survivors on a raft in the middle of a violent, insensible ocean. Supernova is small pools of warmth along a long, dark street, walked in the company of wonderful guys I wish I knew and could spend an evening with some time over wine, listening to how they love each other in the way they finish each other's sentences. Their travels will end. All our travels will end. Sam looks through a telescope at one moment to find a place in the sky. He asks Tusker if he's found it and makes a joke about beginner's luck. "No, you had a wonderful teacher," Tusker says. He did. I learned a lot, too.