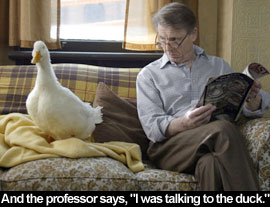 by Travis Mackenzie Hoover Not long ago in these pages, I gave Ginger Snaps II: Unleashed a thumbs-up for leading us out of Canadian master-shot hell with a bold use of montage. Little did I know that the master shots would deliver a riposte so soon afterwards, but lo and behold, here is The Republic of Love, a movie that finds a way to use Canada's compositional rhythm of choice to fairly spectacular effect. True, it has some narrative deficiencies, and it builds to a climax that never really arrives, but Deepa Mehta's slick and stately use of cinematography and colour redeems what could have been another leaden exercise in choice-free Canadian aesthetics.

Based on a novel by Carol Shields, The Republic of Love deals with Tom (Bruce Greenwood) and Fay (Emilia Fox), two people who live in the same building and have little luck in love. He's a thrice-divorced late-night disc jockey with a bizarre family history; she's a mermaid-folklore specialist intimidated by her parents' rock-solid relationship. As Tom is alone and Fay has just broken with her casual lover of three years, neither is optimistic of their prospects--but then, at a children's Halloween party, they meet, fall in love, and soon are shacking up and thinking committed thoughts. However, they're soon in for a bit of a speed bump: After her father leaves her mother to get some personal space, Faith's faith in the institution of couplehood is shaken. As she withdraws from Tom, we are left to wonder: is it curtains for their relationship?

So the film is a strange hybrid of Hollywood belief in romance at all costs and Canadian oddball whimsy, and it makes for an uneasy alliance. Mehta and her co-scenarist (and presumably source novelist Shields) take what would normally be a breezy little romp and inflate it well past the point of its modest importance. Fate doesn't just bring these two together--the filmmakers practically assembles a Greek chorus to inform you of the significance of fate and its ramifications on the life of poor overdetermined Tom and Fay. As well, there's a torrent of "touches" that go over the top, from Fay's florid speech on her field of study that links too easily to the theme to the cliché callers to Tom's show, who again hammer home what has already been established about the cosmic significance of their relationship.

What saves The Republic of Love is its look, which undercuts the script's metaphysical shenanigans and brings it down to sensuous earth. Mehta the director is aware of the script's non-naturalism and so shoots things with a vivid glow. Though her camera often fixates on the empty space and static editing rhythms, she compensates by giving us splashes of bright colour and gliding camera movements that feel luscious and luxuriant. The slick pleasures of the image heighten the plot machinations, making them lightly magical instead of heavily portentous, redeeming the whimsy with the fortifying touch of cinema. And while this can't quite help the film come to a climactic ending (there's a mild flip-flop, and then it's over), it can give myriad other pleasures on its way to that trickling anti-climax. The Republic of Love is no masterpiece, but it is pleasurable in ways that Canadian films never are, and so it gets my vote as one more challenge to aesthetic business as usual in this country. Originally published: February 13, 2004.