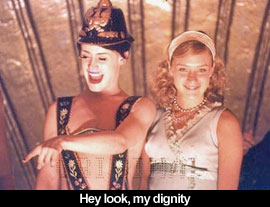 by Travis Mackenzie Hoover By all rights, Party Monster shouldn't work as well as it does. Not only is it flip about matters of grave seriousness (in this case, the murder of a Hispanic drug dealer by Club Kid impresario Michael Alig), but it hasn't got much on its mind beyond the endless debauchery afforded by its subject matter, and consequently gives all other matters the rhinestone-studded shaft. But despite all of this shallowness, the film is surprisingly engrossing; as Alig falls into his downward spiral, it becomes a harrowing reminder that, per the film's much-abused Blake quote, the road of excess can often lead to the path of destruction.

For those unfamiliar with the Club Kid phenomenon, Alig (played here by Macaulay Culkin) was the gay small-town boy who made a name for himself by throwing extravagant parties at New York's Limelight nightclub, at which he encouraged outrageous costumes, excessive drug-taking, and a general pan-sexuality that was for a time (the late '80s-early '90s) extremely popular. But he was also (according to the film) a master manipulator: Using his fast study of senior scenester James St. James (Seth Green), he steals his mentor's thunder to the greater glory of his own parties (and his own ego). As he rose, so he fell: hopelessly addicted to drugs and in debt to his dealer, Angel (Wilson Cruz), the latter confronted the former and wound up dead. The party, as they say, was over.

Now, in all fairness, directors Fenton Bailey and Randy Barbato (who already filmed a documentary on the subject of Alig, also called Party Monster) are not very smart, and accordingly manage to miss most of the significance of the events they're recreating. Half-admiring of Alig's ruthlessness, they manage to miss the central irony of a misfit from the sticks creating an exclusionary clique of his own; instead of exploring the psychology of their subject's desire to be the centre of attention they seem to indulge their own; the production is essentially an opportunity to one-up the king of all parties, laughing at the incarcerated corpus of one who would otherwise have risen above it all. Thus Party Monster smacks of hypocrisy, with the directors throwing stones in their own fabulous glass houses.

But one doesn't really notice this, because the raw material is so disturbing that it wipes Bailey and Barbato's pettiness right off the screen. Once Alig kicks into raging addict mode, the film scuttles the glitter and shows the true emptiness of the whole scene: Unlike the Warhol factory, to which Alig desperately aspired, there's no program here but chemicals and one-upmanship. Our hero can't hit bottom, because there's no bedrock to his scene--he just keeps going until he (and his supplicants) are so addled they can't distinguish right from wrong. The results are horrifying even when you factor out the murder, and they make the movie a riveting skim across the surface of a burnout. Originally published: October 24, 2003.