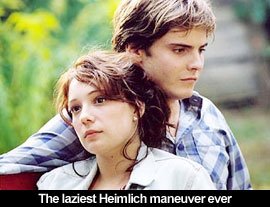 by Travis Mackenzie Hoover Good bye, Lenin! is that rarest of beasts, a popular film that's actually about something. Detailing a former East German's mixed emotions at the demise of communism, it's precise in its modelling of a historical turning point without either trivializing or preaching. One doesn't have to pick out the plums of insight from a thin pudding of plot: The elements of analysis and narrative fuse so seamlessly that they carry you along, making a happy medium that is supremely satisfying. One wishes that Hollywood could turn out a film such as this, which, for all its movie-movie gusto, deals with complex issues real people have to deal with, making its huge success back home a heartening sign in this age of Amélie and cultural amnesia.

Alex (Daniel Bruhl) is a young man who has watched the DDR crumble before his very eyes. One day he's clashing with Stasi thugs over civil rights, the next his country is a memory and he has to learn a new set of rules. But that's nothing compared to what his mother (Katrin Sass) has had to face: a devout communist after her no-good husband defected to some Western tart (or so she says), she collapsed with a heart attack after watching her son get battered by the police--meaning she was in a coma for the fall of the Wall and has no idea that the capitalists have taken over. As the shock of the news might kill her, her son goes about denying the events of recent history, first collecting communist packaging to disguise the food she eats; soon things escalate into Alex faking news broadcasts and creating elaborate histories around which East Germany revolves. As you can well imagine, this gets a little tiring.

One reads that synopsis and thinks it a little cute--a high concept gimmick that all but gives it up for the "realism" of capitalism. But Good bye, Lenin! is far more conflicted than that. For one thing, director Wolfgang Becker separates the reality of East German totalitarianism above to the ground-level socialism of Alex's mother, suggesting that there were values in communism that were swept away without proper consideration. Furthermore, the new Germany has its own problems, from the simple garishness of consumer culture to the little issue of unemployment--a matter that was a non-issue in the days of communism. The film looks back and looks forward simultaneously, comparing and contrasting the two regimes and yearning for something that serves both masters. And so the central gimmick turns out to be a way to explore a former East German's cultural whiplash as he tries to build the best of all possible worlds for his ailing mother.

To that end, Becker brings a bracing, colourful rush to Good bye, Lenin!, sucking us in on his characters' momentum and making us ride along with them through their various trials. One can't call his style masterful (it's coloured a little too much like a TV commercial), but one can certainly call it skillful, and it gives vivid life to both regimes--especially as their imagery begins to blend together with each other's. Furthermore, Becker is a humane director, uninterested in slapstick cruelty even as he negotiates some witty vulgarity in his dealing with certain characters. But his greatest achievement lies in making us live the loss of communism as well as its fall, showing us the collateral damage as history lays waste to the landscape--something you won't see on a pop screen anywhere else in the Western world. Originally published: March 19, 2004.