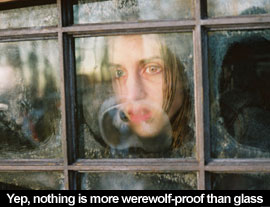 by Travis Mackenzie Hoover Many times I have watched Canadian films, and many times I have wondered: do my countrymen not know about a thing called montage? Too many Canuck efforts park the camera outside of the action and refuse to cut in come hell or high water, creating a national cinema of cold, static films that move like molasses. So it was with shock that I witnessed Brett Sullivan's deft use of cutting in Ginger Snaps II: Unleashed--whatever shortcomings the film might have, it never ceases to remind you that you're watching a movie as opposed to a record of people talking. The result of Sullivan's grasp of editing is a film that jams its themes in your face, daring you to try and ignore them, making for an experience more bracing than that of the usual Canadian product.

Now, to be honest, I was not a fan of the first Ginger Snaps, and I must regretfully report that the new film carries over one of its least savoury conceits. Part one found us perversely rooting for the reining in of budding female sexuality, which took the form of lycanthropy; we were made to hope that Ginger Fitzgerald (Katharine Isabelle) would be defeated as she flowered into a magnificent wolf-girl. And so we start the new picture with her sister Brigitte (Emily Perkins)--slayer of Ginger and infected with her affliction--on the run, shooting up monkshood in order to keep her own wolfishness at bay. Worse, she's being stalked by another wolf-creature (the return of the repressed?), and after a nasty episode in which an innocent librarian becomes a chew toy, Brigitte finds herself in a rehab centre, separating her from the substance that keeps her human. The film is thus a saga of repressing one's inner nature--more "pent up" than "unleashed."

Ginger Snaps II: Unleashed is rich in detail, starting with the characters. Flanking poor beleaguered Brigitte is Ghost (Tatiana Maslany), a morbidly curious 14-year-old who is fascinated with our heroine's lycanthropic exploits. As rendered (brilliantly) by Maslany, she's creepy enough to make Christina Ricci look like Donna Reed, and shoots most of her scenes through the ceiling and into the stratosphere. Anchored by these two leads, the production delves into the minutiae of the rehab centre, led by the aloof and condescending Alice (a regal Janet Kidder) and policed by the corrupt and corrupting orderly Tyler (Eric Johnson). When Tyler's drugs-for-sex policy becomes too much to bear, our leads break out to Ghost's burned-out house, covered with awful, skin-crawling rural kitsch. Even on a limited budget, the production design is excellent, and the performers are loose and natural in a country full of stilted austerity.

But these elements are brought together with maximum impact through the efforts of director Sullivan (and his shot list). Not content to simply record the narrative events, he enlists a probing camera and a rapid montage to keep things moving; breaking scenes down into details, he marshals them into a single rush and thrust that propels the story forward. As befits the material, he comes up with a grungy, physical aesthetic, rubbing our noses in the surfaces of the spaces and finding salient images amongst the most casual of movements, and he builds a scene instead of letting the scene build him. In so doing, Sullivan involves us in the action in ways most Canadian movies can barely comprehend. The resulting film is hardly a masterpiece (Sullivan's a newcomer, still finding his voice), but Ginger Snaps II: Unleashed is nonetheless swift, efficient, and meticulous. Not just not-bad for a sequel, it offers something beyond the still, meditative ineptitude that continues to poison Canadian cinema, far outstripping its predecessor in the process. Originally published: January 30, 2004.