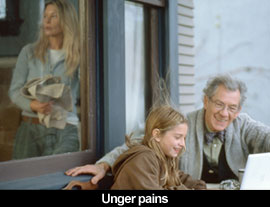 by Travis Mackenzie Hoover In Survival, Margaret Atwood's seminal 1972 study of Canadian literature, she identifies Canadian writers' use of the family as "the trap you're caught in" and identifies a number of inescapable families that shut tight like a prison. Faced with this preponderance of smothering clans, she notes: "What one misses [from these books] is joy. After a few of these books, you start wanting someone, sometime, to find something worth celebrating." Flash forward 32 years and you will have the same complaint about Emile, a film in which the family is a tangled web from which there is no escape--and those who try to escape are doomed to guilt and destructiveness. Teamed with a somnambulistic pace and a painful, childlike politeness, the film so reeks of disappointment that it can't even find the courage to allow its most wronged character any kind of catharsis.

The eponymous Emile (Ian McKellen) is a scientist and academic who spent most of his life in flight from his familial duties. Not only did he bolt from the prairie farm that was his childhood home, he also left his niece Nadia in an institution when her father died in a car wreck. So it seems a little amazing when he is able to stay with the grown Nadia (Deborah Kara Unger) in B.C. while there to collect an honorary degree. It's strange how someone so wronged could tolerate her master-tormenter, but there it is: they're awkwardly stuck in the house, with Emile trying to make pathetic amends and Nadia shooting daggers in return. And the guilt doesn't stop there--Emile keeps flashing back to the farm, where the brothers he left behind to die berate him for abandoning them. One gets the impression that no matter how far you run, you can't hide, no matter how you would like to make a life for yourself and not your clinging relatives.

Part of the film's problem is the issue of plausibility. There is simply no reason why Nadia would give a royal damn about the uncle who left her to fend for herself so many years ago--especially considering he's just using her for free lodging. And some nagging clichés further undermine its credibility: As Emile cozies up to Nadia's spooky daughter when Nadia proves unavailable, we are treated to that time-honoured gambit of using the younger generation as a means of "starting over." Furthermore, writer-director Carl Bessai is not adept at the temporal shifting on which his film hinges, with exchanges between the aged Emile and his forever-young brothers feeling somewhat awkward, particularly when they intrude on the climactic degree-conferral. There are some well-shot scenes and some nice transitions, but overall the film feels plodding and jerrybuilt, as if it were an exercise for Bessai and not something that he burned to make.

But Emile's greatest flaw is its inability to define the family as anything other than a series of ties that negatively bind. Though one can't excuse Emile for bolting from his responsibility to Nadia, his desire to define himself as something other than his fraternal duties seems perfectly natural, and his brothers are the kind of clingy guilt-trippers that would drive any sensible person out of the house. Had Bessai seized on this, it might have given the film complexity--an exploration of the limits of one's relationship with the family as Emile balances his desire for freedom with his responsibility. Instead, it's a one-sided affair all the way, the assertion being that not only can you not get what you want, you should not want what you want, either--a simplistic, self-flagellant pose that makes the filmmaker feel stoic but which doesn't begin to address the issues raised. There must be more to the family than this grim resignation, but Emile doesn't let on to anything beyond its borders, destroying itself in the process. Originally published: January 30, 2004.