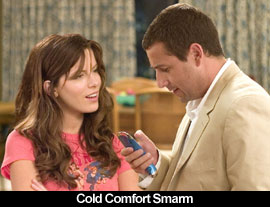 by Travis Mackenzie Hoover Adam Sandler would have you believe that his latest film is about a man with a remote that controls the universe, but as the first fifteen minutes of Click manage to debase women, Arabs, and Southeast Asians in one fell swoop, you get the sinking feeling that the medium is not the message. In fact, the movie's high concept becomes a mere skeleton on which Sandler hangs his white male entitlement, which extends to reducing women to simple sex objects (good if you're Sandler's wife, bad if you're his daughter) and turning anyone outside the margins of the star's ex-frat-boy demographic into a victim of tyranny. That the plot engineers the redemption of this jackass is too much to bear--one whiff of his hostility and you'll want him thrown back into the pit.

I wish I had light, Anthony Lane witticisms with which to dismiss this movie: I could easily go to town on the narrative if the film's cruelty weren't so pervasive. Michael Newman (Sandler) is a harried architect who can't seem to find time for his family, meaning, of course, that he's going to be dealt a magical "Christmas Carol" comeuppance whereby he's shown the shambles his life is destined to become. Jacob Marley arrives in the covert form of inventor Morty (Christopher Walken), who has secret room in a Bed, Bath and Beyond where the existence-altering über-remote resides. Thus we're sent down the river on a familiar affirmative odyssey in which the remote starts fast-forwarding past small but significant moments, forcing him to face that family is more important than blah, blah, blah.

Only problem is, the world that surrounds Michael exists to facilitate the power of his angry male corpus. Dealt with dismissively even when she's right, wife Donna (Kate Beckinsale) is a hottie most often seen wearing short-short pyjamas and tight spaghetti-strap tops. That Donna never ages beyond a few streaks of grey in her hair is pretty much all you need to know about the film's opinion of women--until you get a taste of Michael's horror at his daughter's development, that is. Samantha Newman (Katie Cassidy) is perhaps the most demeaned character of the year, a pair of breasts for the protag to worry about (and for the rest of the production to ogle) and then shunt aside for the more pressing issue of favourite son Ben (Jake Hoffmann).

What of the rest of the populace? Simple: you are the target and Sandler is the shooter. If you're Japanese, you're uptight and obnoxious; if you're Arab, you're uptight, obnoxious, and have a funny name; if you're not a hot secretary, you're uptight and actually a man--in fact, if you're anyone outside of Michael's race, gender, or geographical orientation you're an annoyance to be treated with contempt. It's not exactly bigotry that's the problem, it's hostility: You're left with the impression that Sandler and company are letting off steam with these cheap shots. That they subsequently pull a 180 and try to be "redemptive" is no excuse--my skin was crawling throughout the running time as the hero acted like a bully towards every unfortunate passerby.

No, Anthony Lane is not with me today. Click deserves a response as heavy-handed as its seething macho aggression, a firm "no" to its laissez-faire acceptance of the most appalling behaviour and its ill-tasting chaser of Hollywood uplift. It's the worst movie since Madea's Family Reunion, with the pair making an apt double bill: both are lazily directed, both are profoundly unfunny, and both traffic in repugnant ideology while pretending to have solid priorities. It manages to elicit nostalgia for the firm moral centres of Brett Ratner and Michael Bay; I never thought I'd live to see the day. Originally published: June 23, 2006.