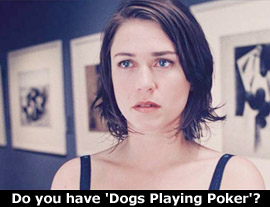 by Travis Mackenzie Hoover The problem with Atom Egoyan's Ararat is not that it takes a hard stance about the Armenian Genocide, but that it avoids taking a hard stance about what to do with that hard stance. While the writer-director takes great pains to show how various approaches to historical memory can be twisted through suspect convention or personal hurt, he neither offers a process that might actually do the job nor feels confident that anyone could--an impasse that ironically condemns his own film to be one more body on a pile of dangerous irrelevances. So frightened is Egoyan that he'll make a mistake that he builds layer after layer of distantiation, trying to build a theoretical machine that will absolve him from the responsibility of mapping a position; the results backfire spectacularly, making the slaughter of a million-plus people, seen distantly through the film's fish-eye lens, even more of a footnote than before.

Admittedly, the issues are more complex than simply adopting a pro-Armenian stance. Egoyan, with some justification, seems to be wary of making a linear Schindler's List-style epic that purports to show what the experience of the genocide was "really" like; he ridicules the whole notion with his film's centrepiece, a super-production by famed director Edward Saroyan (Charles Aznavour) that tries, with great cheesiness, to resurrect the horrors of 1915. Furthermore, he wisely avoids taking a doctrinaire stance on how the remembrances should transpire. Giving us a fractured family, with Ani an art-historian mother of Armenian descent (Arsine Khanjian) trying to dictate the memory of her late terrorist husband to her children (natural son David Alpay; stepdaughter Marie-Josée Croze), Ararat deftly demonstrates the precarious nature of remembrance: Ani wields the father's acts as a scythe against any criticism while the non-Armenian daughter pleas for the presence of her own, mysteriously dead father.

But these images simply hang in space. Egoyan doesn't push them through any sort of process that might reconcile their positions; Khanjian and Croze simply give up and hate each other, Saroyan makes his questionable epic, and that appears to be that. Despite juggling intersecting narratives--Alpay is the driver for the film's main Turkish heavy (Elias Koteas), whose boyfriend's father (Christopher Plummer) is a customs man who questions a possibly-drug-smuggling Alpay some time down the line--Egoyan never suggests that they might be changeable views. People are, and they do what they do, and nothing can be agreed upon. While he vaguely comes down on the side of remembrance--there is the Alpay-Plummer tête-à-tête, in which the former must convince the latter that his secretly-made tapes of sites of the genocide are not backed by drug money--he doesn't seem to have any faith that it will do much good, or not get perverted by personal need.

All of the film's problems stem from Egoyan's paranoid fear of touch. In a recent issue of Cinemascope magazine, he is quoted as saying: "I love making images, yet I'm suspicious of them...I'm suspicious of about what I'm trying to add to this culture, and would expect a lot of people are as well." This love and suspicion--that is, an indulgence quickly slapped down with guilt--is what destroys the film, as it tries to create a superhuman non-movie to override what a humanly fallible filmic statement would do. So he heaps scorn on anyone trying to make a definite statement, despite the fact that statements are all we have to go on. His suspicion, while warranted to a point, results not in caution but in paralysis, an inability to re-arrange his intricate arrangement of denials so that someone might agree on a plan of action.

This also finds a way to poison the film's aesthetics. Egoyan is so hands-off compositionally that it's impossible to tell the epic he's mocking to the narratives he's taking seriously. He's also so frigid that he can't churn up emotions when he wants them; a scene with Armenian painter Arshile Gorky in agony winds up looking ridiculous because Egoyan can't do anything but stare dumbly at him instead of visually articulating his emotions. But to do that, he would have to put himself in his place, and the ever-terrified Atom doesn't feel authorized to step inside and risk killing innocent bystanders. Instead, he kills the viscera and sends his movie into a very unhappy medium that will satisfy no one.

I felt angry coming away from Ararat, and for all the wrong reasons--not because its examination of the genocide and its memory opens old wounds, but because it's wasn't willing to make new wounds in order to do so. In its headlong rush to be safe and correct, it forgets that safeness and correctness are means to and end, and not the end it itself. It becomes a monument to a director's carefulness instead of instructing us in the hazardous but necessary process of historical memory. Originally published: November 15, 2002.