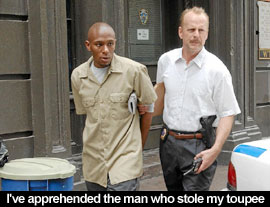 by Walter Chaw There's a lot to like about Richard Donner's ultimately simpering retread of the long-dormant corrupt-cop/asphalt-jungle genre 16 Blocks. Among the highlights is Bruce Willis's drunken, crooked detective Jack, who--sporting a pot belly, a gimpy leg, bad facial hair, flop sweat, and breath you can practically smell through the screen--makes a decision early on to be the hero at odds with ex-partner Frank (David Morse) in transporting his charge Eddie (Mos Def) the titular sixteen city blocks so that Eddie can testify against New York's finest. Standing in their way: an arbitrary time limit and a whole department of collectors for the widows and orphans club, looking to exact a little Giuliani on the suddenly-vigilante pair. Comparisons to Firewall, that other picture buried in the first quarter 2006 starring an over-the-hill tough guy, are inevitable--and revealing, too, in charting the extent to which ego allows Ford and Willis to age as action heroes (Ford: not at all; Willis: a good bit) and, consequently, how successful these films are in crafting their respective scenarios. The standard against which 16 Blocks will be held, however, is one established by the likes of Prince of the City and Serpico (or even a later Sidney Lumet like Q&A)--it's they to which Donner clearly aspires, what with the picture's setting, its admittedly spurious exposé of bad apples on the force, and at least the first hour of Willis's performance, equal parts broken-down gunsel and brown-bagging wino. 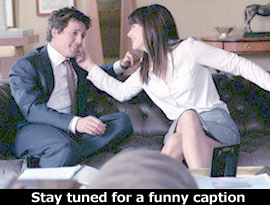 by Walter Chaw I suspect that the preponderance of advertising executive characters in romantic films nowadays (What Women Want, Sweet November) is a misguided attempt to justify excessive product placement. There can be no other explanation for the blatant shilling of Coca-Cola and Miller Genuine Draft in Mark Brown's smarmy, derivative Two Can Play That Game, a film not otherwise about soft drinks and cheap American beer that is festooned with more conspicuous logos than a NASCAR driver. The impression that the movie is little more than a naughty-talking, 90-minute commercial for cool refreshments and prehistoric gender stereotypes is enhanced by characters who keep breaking the fourth wall to address the camera directly.

by Walter Chaw Inviting direct comparisons to Todd Haynes's ebullient Velvet Goldmine with a flying saucer, Michael Winterbottom's brilliant 24 Hour Party People apes, too, a great deal of the style and tone from that film: insouciant, arch, and invested in giving over the stage to the zeitgeist of an era through its youth culture and its music. 24 Hour Party People distinguishes itself, however, with a flip, post-modern absurdism that includes asides to the camera ("I'm being post-modern before it became popular") and a certain self-awareness that somehow encapsulates the discursive, free-associative madness of Factory Records founder Tony Wilson (Steve Coogan). Beginning with The Sex Pistols' first performance in 1976 before a rapt crowd of 42 people, the picture takes on a dizzying kind of animal logic, stalking the fortunes of the "New Wave" Manchester ethos of Joy Division (into the band they became, New Order), Happy Mondays, the Hacienda dance club, and, most importantly, Wilson himself--part huckster, part savant. All along, Wilson cues us that the world is about to change and that this band of brothers, this group of bouncing, sullen, devotees to a new punk energy, are the men who will change it.