by Walter Chaw Bao Nguyen's Bruce Lee documentary Be Water is a moving hagiography of a legend immortalized by his sudden death at the beginning of his career. He reminds of James Dean in that respect, captured in amber as this eternally young punk icon for the disenfranchised, the alienated, the frustrated. He was a point of pride for Asian-Americans and became a peculiar rallying point for African-Americans, too. The pressure for me to write favourably about this film is crippling and depressing. It occurred to me not to review it at all. Bruce Lee's legacy is complicated. He was someone I lionized when I was a kid. Slight, wiry, he looked like me when I was little. That he could become something so huge in my imagination was to me extraordinary. If he, with his heavy accent and ferociously Chinese demeanour, could refuse to assimilate and yet rise, maybe this country meant what it said. You know what, though? It doesn't mean what it says.

by Walter Chaw Agnes Gund is a fantastic person, a philanthropist art collector who sits as President Emirita for the Museum of Modern Art. She champions artists while they're living, visits them in their studios to better understand the hands that move the creations, and recently sold a famous Roy Lichtenstein original ("Masterpiece") for an ungodly sum of $162 million, which she used to create a foundation called "Art for Justice" dedicated to penal reform, with the ultimate aim of eradicating mass incarceration. She's been called the "last good rich person" by the NEW YORK TIMES and it's hard to argue, though the bar is admittedly low. The temptation is to launch into a long screed on the moral abomination of allowing such a thing as a billionaire to exist in the first place, just one of the many digressions that daughter Catherine's able, functional documentary Aggie inspires. There are moments in this film where Gund, now in her eighties, needs to be cajoled into speaking (they're played off as more of her humility), intercut with archival footage of a younger Gund demonstrating a more able public persona. She's slowed down considerably, and I wondered a time or two if she has someone to manage her estate. I worry about her, but the film does not.

by Walter Chaw Hyphenate Lawrence Michael Levine (Uncle Kent 2) ventures into Darren Aronofsky territory with his insular, solipsistic Black Bear--the kind of movie that actually deploys "solipsistic" as a word to develop its two female leads: one uses it, the other pretends not to know what it means. It's a game that sophisticates play with one another, I guess, and Black Bear, split into two loosely-related halves, is also a game sophisticates are playing with one another, or at least with themselves. In the first segment, co-producer Aubrey Plaza is Allison, a movie director renting a room in a cabin in the woods from a bickering couple, Gabe (Christopher Abbott) and Blair (Sarah Gadon). Blair is pregnant, Gabe is insufferable, and the two of them spend a lot of time arguing about whether or not women had it better in the 17th century, when they were the property of men. (It's one of those arguments Jordan Peterson makes because Jordan Peterson is an incredible asshole.) So they fight, and Allison is caught in the middle. They also bicker about whether or not Blair should be drinking wine while she's pregnant, and then Blair goes completely apeshit and says that Allison's pussy probably smells like "spider shit." It might be an improvisation, which is really something if it is--and really something if it isn't.

Sundance '20: The Painter and the Thief

by Walter Chaw Shot over the course of three years, Benjamin Ree's documentary The Painter and the Thief details the relationship that blooms between artist Barbora Kysilkova and a man, Karl-Bertil Nordland, who stole two of her paintings from a gallery. That's it. You should see this movie and then come back here because I want to talk about it with someone--but you should see it first. Okay. You back?

Continue reading "Sundance '20: The Painter and the Thief" » 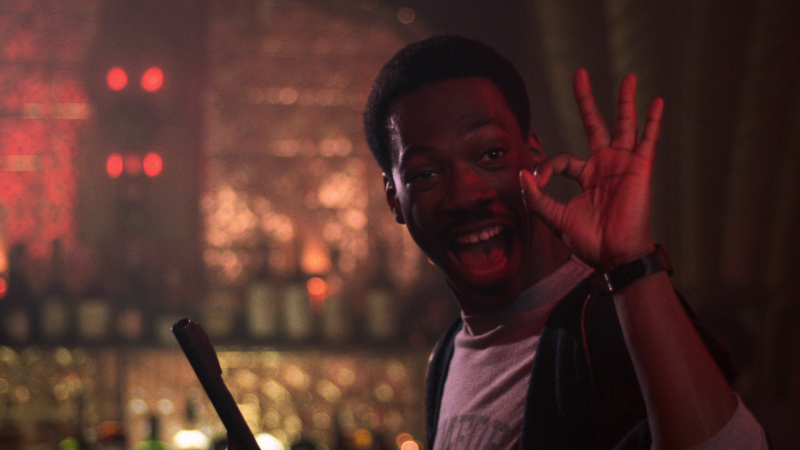 Please note that all framegrabs are from "Beverly Hills Cop: 3 Movie Collection"

by Walter Chaw I used to watch Beverly Hills Cop about once a week in regular rotation with other movies I bootlegged during those first delirious go-rounds with the VCR-connected-to-rented-VCR carousel. It was on an extended-play tape with two other movies (Desert Hearts was one of the others, Re-Animator the third; quite the triple-feature!); back then, quantity beat the ever-loving shit out of quality. (Bless Paramount, by the way, for always being too cheap to encode their VHS tapes with Macrovision.) For me, Beverly Hills Cop was, like its contemporary Ghost Busters, the ne plus ultra of comedy--my eleven-year-old self still a couple of years away from Monty Python--and the requisite throwaway scene in a strip club was enough to be the centrefold in this analog PLAYBOY that, huzzah, I didn't have to hide between the mattress and bedspring. The picture had, truth be told, everything a pre-pubescent boy could want in terms of violence (but not freaky violence), sex (but not freaky sex), nobility (the easy-to-understand kind), and plotting (ditto). The hero was an African-American man I'd never seen on SNL (which was on too late for me to catch) and had likewise never seen in 48Hrs.. He was small and not particularly powerful, but he was lithe and had a quick wit and compelling improvisational skills, and he ably parlayed his minority status in a few scenes that aren't the slightest bit threatening. Eddie Murphy's Axel Foley is, in fact, not entirely unlike cultural brother E.T.--the outsider hero with special abilities who, mission accomplished, can slink off to wherever it is he came from.