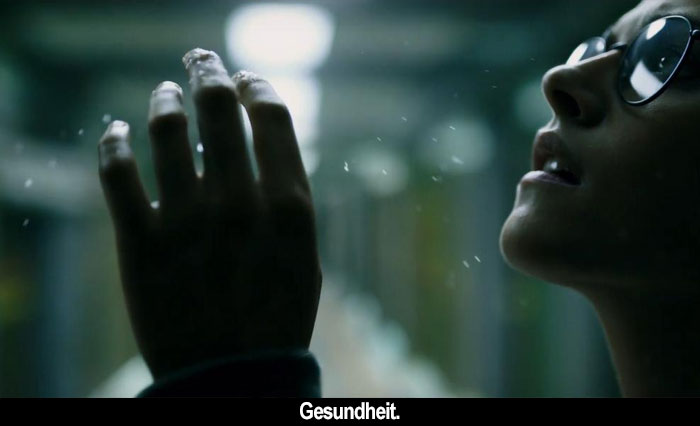 by Walter Chaw Wasting absolutely no time and not interested in talking to you about it, William Eubank's Underwater is both a model of efficiency and a prototypical post-modernist piece wholly reliant on your familiarity with this genre for its depth and backstory. A seasoned viewer knows that this film is going to be about a small group of survivors picked off one-by-one; that the real bad guy will be corporate greed (or Russian greed, depending); and that if you're African-American or, God forbid, Asian, you'll very likely be the first to go. Curiously, it's in these aquatic thrillers that key exceptions to that rule--Ice Cube in Anaconda, for instance, or LL Cool J in Deep Blue Sea--seem to make their appearance. Maybe the trick to surviving the monster is being a late-'80s rapper. Alas, Mamoudou Athie is not a late-'80s rapper. He plays Rodrigo, friend of plucky engineer Norah (Kristen Stewart), and it's at his urging that Norah saves their deep-sea drilling platform to initially survive a mysterious event--and then through his noble sacrifice that Norah gets to continue to be heroic. It's worth dwelling on this conceit, but there's no time: once the dust settles on the disaster that opens the film, several other disasters follow in rapid succession. 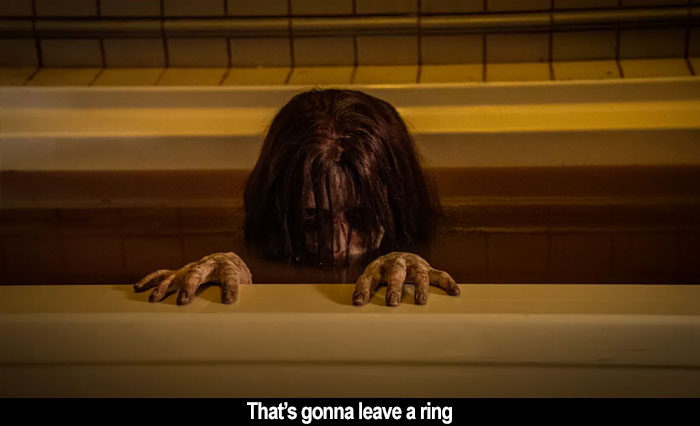 by Walter Chaw The horror genre is one that's particularly suited for remakes. At their best, scary stories deal in archetypal images in pursuit of exorcising essential concerns. They're fairy tales, fables. They're warnings carrying lessons for the survivors. I think they're how the bulk of human culture was transmitted and instrumental in our species' survival, offering explanations for why sometimes people don't come home if they're caught out in the night or wander off the trail or split up from the safety of the pack. They talk about outsiders, alien threats, and other invaders infiltrating from without and within: the dangers of transgression and the failures of denial. They are Jungian shadow projections made grotesque by their repression. They grow like obscene toadstools in the soft earth of our subconscious. A good horror story should be remade for every generation. Jack Finney's Invasion of the Body Snatchers is a prime example of a premise made fresh across several decades--each time, each new film adaptation, a different social anxiety grows into its central metaphor, so it becomes a touchstone evergreen in the development of our understanding of the dangers of the greater world. Horror movies, good ones, have something to say. If you listen. 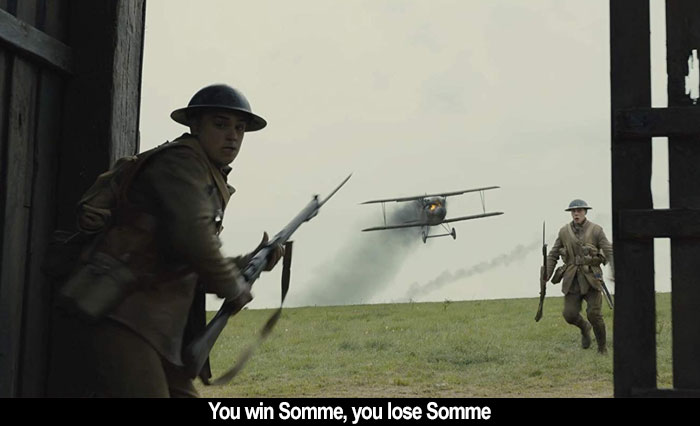 by Walter Chaw Paul Fussell wrote what is for me the definitive book about WWI. It's not an exhaustive history à la Martin Gilbert's authoritative volume (or the countless other masterpieces and approaches the conflict has spawned from authors such as Robert Graves, Barbara Tuchman, and Erich Maria Remarque, not to mention the poetry of Siegfried Sassoon and Wilfred Owen), but Fussell's The Great War and Modern Memory was my gateway to understanding how war has influenced our outlook on the world and our interpretation of it. From the start, Fussell goes deep on the notion of war as "ironic action," giving a close reading of a passage from Edmund Blunden's Undertones of War, in which a young lance-corporal cheerfully fixes tea in a shelter as the author walks by. A shell drops, the author breathes a sigh of relief at the near miss, but a cry calls him back to a scene of carnage as the lance-corporal has been reduced to "gobbets of blackening flesh." Just at that moment, "the lance-corporal's brother came round the traverse." He offers further examples, for instance the mother driven to madness by two of her three sons being killed in a doomed push and then, once the third has been targeted for salvation by his commanders, news that a shell has detonated, leaving only one man dead (guess who) and all of his compatriots unscathed. Irony, Fussell argues, was the only way, post-Battle of the Somme, for shell-shocked survivors to impart the screaming, existential absurdity of freshly-mechanized war's indescribable atrocity. WWI defeated the peculiar innocence evinced by the prophylaxis of language immediately prior to its screaming nihilism. Reality had shifted for us in a season of impersonal death--our language and means of expressing the same with it.

by Bill Chambers To paint a picture of how juvenile Mike Nichols's What Planet Are You From? can get, its running gag is a humming penis. The film stoops, often, to a level of humour rarely found outside the schoolyard--or an episode of "Married With Children". Yet there's infectious sunshine in Garry Shandling's first big-screen starring vehicle that makes it difficult to begrudge its bad taste. Whatever issues I may take with What Planet Are You From? certainly have nothing to do with being offended by it. 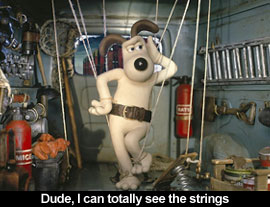 by Walter Chaw John Powers once called Nixon-era Oliver Stone our most Nixonian director: smart, driven, divisive, unlikeable. So the neatest trick of Stone's latest biopic, W., is to make George W. Bush--arguably the most reviled, detached, ideologically arrogant president since James Buchanan--a figure of genuine pathos. Never mind that this incurious, adolescent, fundamentalist fanatic is our proverbial Nero, fiddling while every foundational tenet of Lincoln's party is fed to anti-intellectualism and evangelical Christianity. George Orwell said something once about how the end of democracy is heralded by millionaires leading dishwashers; what's unexpected for me is the extent to which the Republican party in the new millennium has not only convinced the blue-collar to vote against its own self-interests by waging class warfare against liberals, but also begun to turn against the intellectuals in its own party. "Georgetown cocktail party" conservatives are now painted with the same broad brushstroke as "Latte-sipping" lefties--and this idea of abandoning the middle class takes on the onus of not just money and privilege, but education and eloquence as well. The logical end-point of wanting a President as ill-read, venal, and feckless as your alcoholic born-again Uncle Festus is a figure like Governor Sarah Palin, whose chief qualification appears to be her ability to blend into your local chapter of Oprah's Fan Club without a ripple. Hate, division, ugly innuendo, and racism: sowing fear and reaping the political benefits until the house falls down.