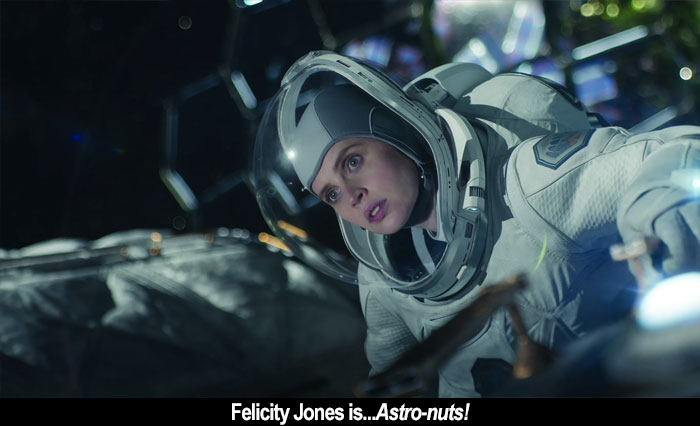 by Walter Chaw Of late, I've wondered what my madness will come up with when it reaches the point of conjuring metaphors. Will it be a house of peeling wallpaper, rats in the spaces between the upstairs as a reference to me falling apart? Will it be the phantom of the ghost of a memory of something I regretted doing as a child, made manifest as a foundling I must take care of but can't ever quiet? Maybe it'll be the manuscript I write obsessively in spirals on the floor, or the way I wipe down every surface, exposed and hidden, in a Lady Macbeth-like compulsion to erase the indelible stink of a lifetime of creeping moral corruption. Maybe it'll just be three ghosts telling me it's not too late. It is too late for Dr. Augustine Lofthouse (George Clooney), who sits by himself in an abandoned arctic research facility in 2046, three weeks after THE EVENT that has caused Earth to become uninhabitable for humans--though not so uninhabitable that Dr. Augustine Lofthouse doesn't have time to eat cereal and give himself blood transfusions. Metaphors have survived, too.

This is where the first unforgivable thing happens in The Midnight Sky. It's a flashback to the arctic base's evacuation (to where? For what purpose?), where a distraught mother (Lilja Nótt Þórarinsdóttir) looks for a wayward child as they're herded into helicopters. The second unforgivable thing is a scene where Dr. Augustine Lofthouse is scrolling through a list of space missions to find that all of them have fallen out of communication save for one that will be in range in 11 days. The first is unforgivable because it wants to establish tension in the first-act appearance of a little girl on the base, Iris (Caoilinn Springall), who, we are meant to puzzle-box together, has been left behind by the aforementioned distraught mother. Chekhov's gun and all that. I'm being cagey about my language here and everything, but I'll stop it. Iris is a metaphor for, well...we hope it's for something more than the guilt Dr. Augustine Lofthouse feels for being a genius too busy for a family he's abandoned, but then we get the flashback to young Dr. Augustine Lofthouse (Ethan Peck) as a genius too busy for a family with exasperated wife Jean (Sophie Rundle). Oh, Jean. Jean drives away with their child, whom we don't get to see because of reasons.

So what The Midnight Sky does right out of the gate, then, is try to distract that it's a puzzle-box by presenting a fake puzzle-box. This is what we've come to, this late-Hitchcock cameo garbage where after becoming the most recognizable director in the world with his television program, Hitch started timing his cameos earlier and more broadly so people would stop looking for him and watch the damn movie. It's like that, but disrespectfully, because The Midnight Sky believes that even if you're paying attention, you won't know immediately what kind of thing Iris is. Even if you haven't seen Soderbergh's Solaris, in which an empath planet provides phantoms of loved ones to melancholy astronauts, including one played by, yes, George Clooney. The Midnight Sky treats you as though this were the first movie you've ever seen. If it were, you would think that movies are beautiful pictures that move now and again for no particular reason. Treating your audience like it's stupid is unforgivable. If Iris is a metaphor, lean into it. Lean into Dr. Augustine Lofthouse's insanity. Make the rest of the film unreliable instead of a ginormous, prestige-y tearjerker. Is the world really ending, or is this looney tune walking among waltzing couples in Grand Central Station like Robin Williams in The Fisher King?

I didn't like how Titanic made the death of all those people the backdrop for a YA adventure (little did I know the horrors of the decades it would predict); I like even less how the death of humanity is now the larger metaphor for a man at the end of his life realizing that all that really matters is spending time with your kids. In The Midnight Sky's second unforgivable moment, Dr. Augustine Lofthouse scrolls through available channels with future-Siri (who has a multiculti accent, because future) to land on what appears to be the only available prospect for a futuristic space-chat. Much happens where gruff Dr. Augustine Lofthouse has to learn to be a dad (by flicking peas instead of eating them with his adorable stowaway), and then he and Iris need to walk across the tundra to another place, setting the stage for some very exciting, Jack London-y action stuff like the ice cracking and wolves--the ones that haven't died yet, I guess, in, um, Antarctica? But maybe it's a dream that is a metaphor for the intrusion of chaos. No, yeah, it's that.

There's a parallel story in The Midnight Sky involving a space mission with a diverse cross-section of astronauts on their way back from searching for a habitable planet (largely based on research done by genius-level astronomer Dr. Augustine Lofthouse (the same!)), where the plucky, pregnant one, Sully (Felicity Jones), has a metaphorical dream about being stranded on a planet. She has abandonment issues, you see, and is dating--or at least fucking--a "genius-level" mathematician, Adewole (David Oyelowo), who flirts by saying Sully is not very smart. Sully has movie daddy issues. Incidentally, we don't know what Sully's first name is. OR DO WE? Just as exciting Jack London things are happening on Earth to Dr. Augustine Lofthouse, Isaac Asimov things are happening to our astronauts. Will there be a spacewalk? Yes! A meteor attack during it? Of course! There are no spoilers possible for The Midnight Sky, because as soon as you start watching The Midnight Sky, you'll realize that you have not only already seen it, you've seen it a lot. A lot a lot.

The Midnight Sky will also be familiar as a safe, big-budgeted star vehicle designed for self-serious grandiosity and acclaim from professional blurbists who make a living this time of year not watching good movies, busy as they are doing their due diligence with this sort of thing instead. Did I mention that Little Ms. Metaphor doesn't talk? It's because he's never heard her voice, I guess. That's the kind of detail that rewards people looking for cleverness in a piece only interested in unearned emotions...and being clever. Guess what, you're in luck. Mmmm, that's the good stuff. Skeptical at first that the Earth has died in their absence, one of the astronauts asks who they're talking to, and Dr. Augustine Lofthouse says, "Augustine Lofthouse," to which the astronaut, Sully's sperm donor, says, "DOCTOR Augustine Lofthouse?!" I'm not saying I didn't laugh during The Midnight Sky but that I don't think it's a comedy. Your mileage may vary. There's potential here, as there always is with any kind of Silas Marner thing in which a crusty old fuck is charged with taking care of an adorable moppet, but the potential isn't realized when something as slight as that is asked to carry the weight of human extinction. While the temptation is great to consider quarantine metatexts and global-warming parables in movies released this year, honestly, there's as much weight in this as in your average Sting song. What I'm saying is it's not for a lack of trying, the dear thing.