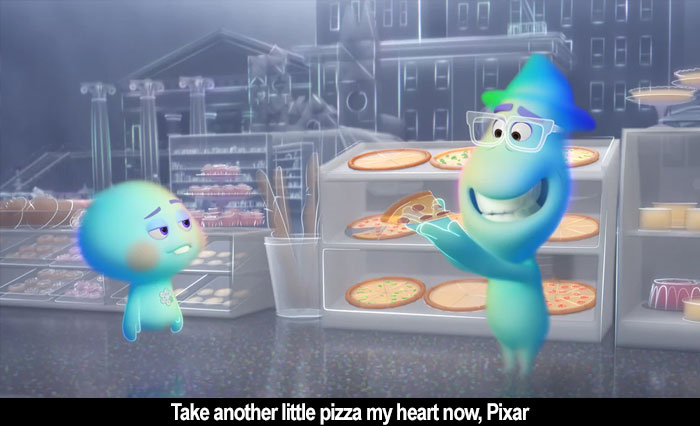 by Walter Chaw Joe Gardner (voiced by Jamie Foxx) teaches middle-school band to a group of largely-disinterested kids and dreams of becoming a big-time jazz pianist like the one he saw in some smoky bar his dad dragged him to one time when he was a kid. His dad was a musician, see, and made a little name for himself. Joe's mom, Libba (Phylicia Rashaad), is a seamstress who owns her own business. She funded Joe's dad's "career" because the world is hard on small things. (Artists and their dreams, too.) Joe is offered a full-time teaching position on the same day he scores a gig with the great saxophonist/vocalist Dorothea Williams (Angela Bassett)--the same day, as it happens, he gets into a terrible accident that will result in his death unless he can convince the superintendents of an A Matter of Life and Death-esque afterlife to give him a second chance. That second chance comes in the form of 22 (Tina Fey), an "unsparked" soul needing to find that certain je ne sais quoi in order to be "born" in, I presume, a human host body on Earth. The rules are diaphanous, with no great expectation to ever cohere. It doesn't matter. Pete Docter's Soul isn't that kind of fantasy. It isn't about the metaphysical, after all; it's really only about something as simple yet as difficult as the importance of living in the moment. Gathering ye rosebuds whilst one might, if you will. It's not deep. I guess it doesn't have to be.

Soul is beautiful--genuinely inventive in its quantum great beyond: an infinite escalator climbing upwards for the dead, and a vast plane where unborn souls look for their "spark" in various World's Fair-like exhibits. 22 is afraid she doesn't have one. If there's a puzzle to be solved in the film, it's not what 22's spark is, but what it means to have a spark. Not being able to find one condemns a soul to a roiling gray desert, where it takes the form of a cyclopean clay golem lurking about: an army of Polyphemuses, all tunnel-visioned and obsessing over the spark they've lost or the one they never found. But that's not Joe. Joe wants to go back to do his gig and claim his glory, to prove his mother wrong and finally make something of himself and honour the paternal legacy he imagines he must honour. All around him, though, is already voluminous evidence that his life means something. He actually inspires his students--he would be fulfilled if only he allowed himself fulfillment. To say this speaks intimately to me would be an understatement. In the film's most affecting scene, Joe asks his longtime barber about his barber's life, then wonders why he hasn't inquired after his friend before. Have Joe's existential blues made him not only less happy, but less of a good person? I wish Soul had more of that and less of the usual narrative motors that drive fantasies like this.

The best parts of Soul are when Docter spends time with a spiralling seedling caught in a puff of autumn air; when he expresses (in a visual flourish not unlike Remy tasting things in Ratatouille) the first taste of pizza; or when an act of genuine generosity means dropping a half-eaten bagel, the most delicious thing a soul completely in the moment has ever tasted, in a subway busker's case. My late father-in-law would compliment every meal we ever cooked for him as the best whatever it was he'd ever tasted. I thought it was merely a kindness. I understand now that he meant it every time. Joe is self-obsessed, a lost soul who holds so tightly onto an ideal at the expense of living. Nothing that was ever sold to me as important turned out to be important in the slightest. After Joe finishes his dream gig (and discovers the piece of half-eaten bagel magically restored in his pocket--a continuity issue so glaring that it either kicks you out of the piece entirely or serves as a cue to everything in this fable being a metaphor), he says to Dorothea that he thought he would feel different. She tells him an aphorism about a fish, water, and the ocean, hops in a cab, and then she's gone. Not one of my achievements in my life means anything.

What matters are my family and my friends and the little, sometimes-unremembered moments I've shared with them. The acts of kindness, forgiveness, grace. Cards I received when I was grieving and cards I remember to write when my friends are grieving. Standing calf-deep in the ocean watching my children play in it for the first time, ready to punch a shark if I need to, though I'm terrified of the water. The rainy day I proposed to my wife, kneeling in a puddle, how the look on her face bloomed in my heart and lives there still. Those things matter. Soul comes around to saying the same thing by the end. There are funny passages in the film--one involving a cat on the Powell-and-Pressburger lift that caused me to lose it for a full minute--and many more that are just good, if familiar, fish-out-of-water slapstick gags. There's something to be said for its use of African-American leads (even with Tina Fey as the catalyst for Joe's evolution), its celebration of jazz and the barbershop and the rundown apartment building and Joe's mom's small-business operation. But mostly, I liked Soul for the simplicity of its wisdom--not for its willingness to pull a punch, but for its unwillingness to throw one in the first place. It's a minor flick, to be sure, but the band is tight tonight and there's some pleasure in that if you give yourself over to it. It doesn't have fire, I'd say, but it's got a spark.