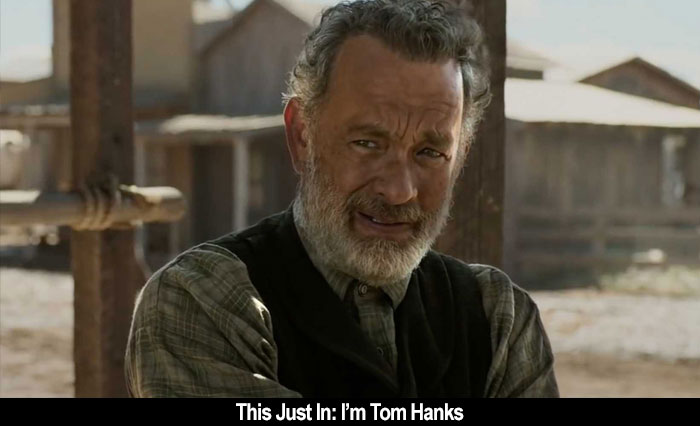 by Walter Chaw It's a "Spongebob Squarepants" gag, maybe, or something from "Phineas & Ferb". Some smart, post-modern cartoon. There'll be a bunch of quick-cuts, several different angles, self-conscious camera movements, and whooshing noises to reveal, at the end of it all, a snail or a sloth moving along glacially. Maybe the punchline is a frog giving out a bored ribbit. This is how Paul Greengrass starts News of the World as well, with Tom Hanks as Captain Jefferson Kidd the bored frog in question. So much sound and fury in the opening moments of the piece, ending with the exciting reveal of Captain Kidd packing his horse to go somewhere. The movie doesn't get better as it goes along, but it does calm down a little, settling into the comfortable cadence of a frictionless, awards-season prestige piece so aerodynamic it'll pass right through you without leaving a mark. Like magic. Call it "The Road to Perdition, Anti-Western Edition" and you'd know enough about it to save yourself the fat awards-season runtime.

Captain Kidd wanders through the postbellum South, reading stories out of newspapers from around the world in podunk town halls full of folksy extras willing to pay 10¢ a head for the privilege. If this sounds a little bit like The Postman, that's because it is--except in The Postman, Kevin Costner played a postman who did Shakespeare with his mule. News of the World is also like Costner's Waterworld, because one day along his journeys he's entrusted with the deliverance of a little girl, Johanna (Helena Zengel), to some far-off destination across a dangerous wasteland beset by bad guys. The worst bad guy, Almay (Michael Angelo Covino--the best part of this film), wants to purchase Johanna for probably not good reasons, then pursues Captain Kidd and Johanna into a shootout from an Anthony Mann western. Here's the catch: Johanna is a liberated little German girl who has spent most of her childhood in the care of a Kiowa clan that slaughtered Johanna's real family. I don't want to be cynical about this story in 2020. I'm trying really hard.

In 1836, a little girl named Cynthia Ann Parker was abducted during a raid by a Native American party consisting of Comanche, Kiowa, and Caddo. She was integrated into Comanche society and lived as one of them for the next 25 years before being liberated by Texas Rangers and returned to her uncle's farm in 1860. Despondent, no longer speaking the language, she made several attempts to escape with her daughter, one of three children she had with her Comanche husband, Prairie Flower. The child died in 1863 of the flu, and Parker starved herself to death in 1870. News of the World opens in 1870 in the same part of the world and probably took at least the first part of Parker's story as partial inspiration for its own plot. Johanna is a feral animal who goes through Captain Kidd's things because she has no concept of personal possessions (nor self-preservation, apparently), which allows Hanks to do his Hanks reaction thing. Johanna tastes ground coffee and spits grumpily. She tries sugar and mmmm, sugar like. Sugar like! Later, in a saloon and offered a bowl of stew, she shoves her hands in the steaming mess and mashes it into her face. That's because this is how savages eat, don't you get it? Savages are disgusting.

Soon enough, Kidd begins to civilize Johanna, and in a couple of heartwarming sequences they begin to teach each other the other's language. It seems like they don't really get beyond the stage where they're naming things like "bird" and "cactus," but the heartwarming conclusion depends on Captain Kidd delivering a complete sentence in Kiowa, so Rosetta Stone must have been around in 1870 is what I'm guessing. For Kiowa, of course. It's unseemly to pick at details like this, except when they're used to manufacture an emotional crescendo. You didn't set it up, you don't get to pay it off. The implied respect for Native American culture this action denotes is, I would say, too little and far too late at this point. The film did make me curious about the Paulette Jiles novel upon which it is based, though, so I read it. It's fantastic. It's an epic poem, essentially; Jiles's voice reminds most of Cormac McCarthy's liminal masterpieces. The writing is subtle, generous, insightful about the human need for connection, and, most bracingly, it shows Johanna to be resourceful and bright, not merely rebellious and invasive. She isn't a burden to be endured and so, by extension, the culture she represents by proxy is not seen as a burden to be domesticated at best, excised at worst. The book is the version of the film someone like Kelly Reichardt would have made--or the one Scott Cooper did make with Hostiles.

News of the World's treatment of minorities is encapsulated by another change from the novel early on. Where in the book a freed slave offers Kidd the hefty sum of $50 to escort the child south, on screen Kidd comes across the lynched body of the freed slave with a sign attached to him declaring that Blacks are not welcome in Texas. I think this was done with good intentions. (There's even a saying about good intentions, if I'm not mistaken, that applies.) There's also a scene here where a narcissistic, megalomaniac industrialist bullies Kidd into reading some self-published "fake news" to a crowd of oppressed workers, leading to the worst moment in the film when Kidd decides instead to free some minds with the healing power of real feel-good news. The message, underscored by the picture's fuzzy epilogue, is that people want to be entertained, and it's the job of the newsman to meet them there.

The Captain Kidd of the novel is curt and dismissive of the morons he's talking to who value uplift over information, whereas News of the World paints them as woodland naïfs just needing a good Puck. The film, then, is either telling an extraordinarily dark parable about how we've always cared more about the tingle than the true-true, or its gloriously happy ending is meant in earnest and News of the World is itself the happy horseshit sold to woodland naïfs. Kidd's attempts to convey cold reality, after all, only cause fights. As messages go, it's outrageously dangerous, but suddenly a film in which an older man gets the shit beat out of him without bruises--without any after-effects at all, really--starts to make more sense. When an older man and a child leap from a runaway cart on a narrow mountain path and escape without a scratch, or when someone gets shot in the head and has barely a wound to show for it, well, now, let's not get too graphic about it. There are no psychic scars, either, not for a young woman "twice orphaned" nor for the moments after she takes up arms herself to enact a moment of brutal violence. Hey, the guy had it coming, right? There's nothing so devastating that can't be patched up immediately by a kind word. These aren't people; they're life-support systems for a happy ending. For a film about a performer of current events, it has a terrible time reading the room.