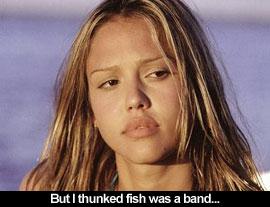 by Walter Chaw Although it's impossible to discern the purpose of a movie like this, you find yourself ironically spending all of Into the Blue trying to do just that. Shot in a leering, dirty-old-man disgusting way by John Stockwell (a filmmaker I've liked in the past, though this one causes me to reassess what's going on in my head), the film places your subjective-camera eye upwards between the ankles of one bathing beauty after another, tracking slowly up and down their swimsuit-model bods and fixing, occasionally and briefly, on a perfunctory thriller plot that arises from nothing, goes nowhere, and makes no impact whatsoever on the parade of cakes. (Both beef and cheese.) It's an exploitation flick in the basest sense of the term, because the poor idiots onscreen most likely believe they've been hired for some sort of talent imperceptible to the rest of us (and with no evidence showing itself for the balance of their careers up to this point) as opposed to for how great they look holding their breath and having a camera positioned three feet from their stern. It's not that I'm complaining about having to stare at Jessica Alba's almost-unclad ass for two extraordinarily long hours--I'm complaining about Alba protesting that she's always cast in films for her acting prowess and not for how she looks almost-naked. I don't know if it's false modesty or willful ignorance, but either way: you gotta be kidding me.

It goes without saying that Alba is horrible as Sam, a dive-bum with a heart of gold--Into the Blue is as queasily fascinating as it is because of the decision to cast her opposite Paul Walker, whose hunky-lunky Jared is, as the film opens, righting a capsized fat guy on a guided scuba tour. It's a mean scene that indulges the audience's presumed disdain for the physically imperfect, reassuring them that this brush with cellulite will be the picture's last. Walker, without hyperbole, is possibly the worst actor the United States has ever produced, and Alba, with her flat delivery and propensity for holding her head at a perpetual 45-degree angle, is staking a claim for the country's worst actress. Together, they're like plastic, extruded action figures involved in a sadistic child's bathtub-masturbation fantasies. Jared is fired for being a rebel on the eve of his pal Bryce (Scott Caan) and Bryce's script-described "coke whore" Amanda (Ashley Scott) paying a visit to Jared's Bahaman paradise. Following lots of underwater photography of Walker holding his breath for three-minutes at a time (death of brain cells no excuse, of course: he's acted like this for years), the quartet eventually discovers sunken treasure, then a crashed drug plane, then love or something. And sharks. And drug dealers. And more sharks. And then after an impossibly long time, it's finally over in a spray of blood--and you wonder whatever could have happened to your morning.

There's an evil treasure hunter (Josh Brolin), a noble cop (Dwayne Adway), and a parade of thugs destined for a bullet or a shark whenever the film should lag (and it lags often), marking Into the Blue as a swimsuit calendar adapted into a feature film with PG-13 gore and violence its only narrative connective tissue. If its purpose is titillation, know that it's only titillating to children guiltily stashing the SPORTS ILLUSTRATED Swimsuit Edition under their mattresses like a holy, onanistic relic. If its purpose is to thrill, know that it's only thrilling to that rare person who gets off on extreme jet skiing and is also armed with the constitution to suffer more than ten minutes of Alba/Walker exchanges before having the good sense to either jump ship or jam their thumbs and index fingers into their ears and eyes. I would say that no one in Into the Blue would actually go see it, but consider the cast and ask yourself if, given the chance, you'd seek their advice as to how you should spend your time and money. I'd say it was a disaster except I think that it turned out exactly the way Stockwell and co. intended: as a posing, lascivious, venal little morality tale that ends with the "right" people financially edified and the "wrong" people drowned, eaten, or shot. While red-staters may cringe at the sexuality, push aside the six-packs and wet T-shirts and you'll see that the politics are all middlebrow, middle-America. Having your cakes and eating them, too: how wonderfully, simperingly decadent. Originally published: September 16, 2005.