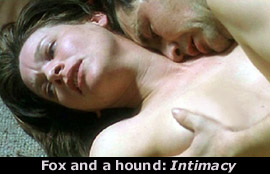 by Walter Chaw Jay (Mark Rylance) is a sour bar manager who, six years previous, walked out on his wife and two young boys. Claire (Kerry Fox) is a dour acting teacher and mother of one married to an oafish Cockney cabbie (Andy, played by Timothy Spall like the refugee from a Mike Leigh film he is). Every Wednesday at two in the afternoon, Jay and Claire couple in Jay's austere, unfurnished flat. As a homosexual French bartender--the too-awkward representation of uninhibited sagacity--helpfully supplies, "It's rare that two people meet one another who have the same needs." But Jay appears to have needs different from Claire's: Trailing her after they rendezvous, he watches her as she drops off her dry-cleaning, takes public transportation, and finally ends up at a hole-in-the-wall drama company to perform badly in a Tennessee Williams revival. Striking up a mine-strewn conversation with his lover's husband over pints of bitter and a game of billiards, Intimacy seismically shifts from one powerful cinematic symbol (sex) to another (theatre), and in so doing demonstrates a remarkable courage in its nakedness; and an exasperating lack of focus in its thrust.

There is nothing erotic about the film's explicit carnality (a laudable instinct that reminded me a great deal of Lizzie Borden's exceptional Working Girls), but neither is very much insight provided into the cool irony of the film's title: the ways in which frustrated people try and fail to connect with one another. Like director/co-screenwriter Patrice Chéreau's desperate protagonists, I found myself initially interested in the secrets these people have to impart and rebuffed by the film's icy emotional reticence and surprising lack of depth. Intimacy is powerful yet unformed, a piece lent an irrefutable authority by the nerviness of its cast, though ultimately betrayed by the same chasm that prevents Jay and Claire from finding the secrets of their own lives in each other's arms.

An emotional shorthand can convey a depth of feeling (as is so often the case in the upcoming In the Bedroom) while at other times, as is the case with Chéreau's first English-language film, it merely announces itself as a veiled interpersonal implication that someone hopes is resonant. Much attention will be ladled on Intimacy for its envelope-pushing sexuality, but what is most notable about the film is its distance, a shift in significance represented by the film's early interest in feverishly Spartan coupling into its late interest in "The Glass Menagerie" presented on a stage sharing signage with a pub's toilets.

For as submerged and difficult as are topics such as the machinations of loneliness and urban isolation, unfettered sexuality and marital responsibility, Intimacy's approach is too transparent--pedestrian, even--in its symbolism. There is much talk of basements, and most of its major scenes take place in a Dostoyevskian underground. Between that and the representative occupations of its principal trio (each of them in service somehow to the needs of others), Intimacy begins to take on the broad motions of a medieval Passion Play and feel nearly as detached from the subtle psychological verities a modern audience desires--and a cast this accomplished deserves. Originally published: December 7, 2001.