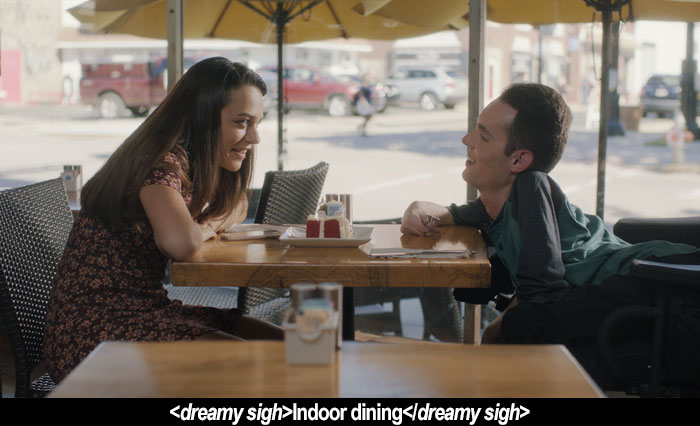 by Angelo Muredda Disabled men finally get that '80s-tinged coming-of-age dramedy they ordered in Bill Crossland's Catching Up, which feels at once like a hyper-niche genre exercise and something a bit too user-friendly for the masses to really say what it needs to say about its subjects' sexual hang-ups. Appropriately, given the light representational twist of the premise and the title's suggestion of something overdue, the film's protagonist, Frank (played by Crossland, who also co-wrote the script with Patrick Morris and co-conceived the project with Mindy Beach), isn't a high-school student on the verge of adulthood but rather a teacher, albeit one who still lives at home with his parents, who relate to him as both caretakers and friends. Along with Crossland's uniquely specific casting--to the chagrin of this disabled writer and probably the filmmaker, too, it's still a novelty to see a physically disabled actor playing a physically disabled character, let alone one they've written and directed--that quirk in the narrative trajectory makes Catching Up pretty novel despite its less convincing efforts to court a wider audience.

Frank's adolescent preoccupation with finding love and surviving hopeless crushes looks to stem from his experiences growing into adulthood as a wheelchair user with muscular dystrophy without much relationship experience or healthy working models of masculinity to draw from. That isn't to say he doesn't have a robust support network around him, between his parents (Jared Michael Delaney and Caroline Duncan) and bratty teenaged sister (Lydia Meredith), his fellow disabled childhood frienemy Fuller (Erik O. Mayer), and his Joey Potter-esque childhood best friend Lorraine (Francesca Carpinini), a closeted burgeoning filmmaker from a traditionalist home. But the reappearance of Judy (Isabella Pisacane), the unrequited object of his teenage affection, as a new staff member at his school reduces Frank to his old longing and frustration.

The idea that a disabled man's romantic bildungsroman might be a decade delayed because he has lacked the freedom and creative sandbox to explore who and what he likes is reasonably fresh, as is the effort to capture Frank's lovesick, brain-poisoned interior monologue via new-wave-inflected dream pop and bubbly montages. Crossland infuses Frank's relatively low-stakes misadventures in love and friendship with the sense, steeped in the kind of lived experience that conservative critics often scoff at but rarely disprove, that disability defers the cultural rituals that tend to mark the phases of a person's life. He also finds an interesting parallel between Frank's holding pattern and that of Lorraine as a repressed suburban queer who doesn't have the language, the safety, or the community to fulfill her needs with what's around her. What starts as a problem--the feeling that there is something age-inappropriate about both Frank's and Lorraine's overgrown behaviour, given that they look to be in their mid-twenties--gradually reveals itself as an interesting take on how unique kinships form among the similarly deprived.

Though these unlikely bonds are fleshed out with nuance, the script is often laboriously over-plotted and seems better suited for a sunny Netflix series like Ryan O'Connell's "Special" than it does a feature film. At over 100 minutes, Catching Up is stuffed beyond its means with narrative tangents--about Lorraine's tentative romance with a patron at the bar where she works, about a disabled student in Frank's class towards whom he has an irrational dislike, and about a stylish personal support worker Frank hires partway through, among others. These don't resolve so much as they drop out the way they might in a pitch for a TV series. And Crossland's nuance about how disabled young men's ideas about women curdle into feelings of resentment and entitlement with age and inexperience doesn't extend to a firm command of tone, which gets away from him at times, particularly in odd stretches of screwball comedy and zany sitcom hijinks.

If it isn't all that successful at being something palatable to every possible demographic, Catching Up is at least something different. There's a tenderness and an offhanded ease to Crossland's depiction of the many different kinds of care relationships (with support workers, family members, colleagues, and friends) in which disabled people find themselves enmeshed, a keen insight into how everyday rituals like transferring in and out of wheelchairs and bathroom stalls and adjusting a creased shirt become collaborative processes. There's a prickly spark as well to Crossland's laconic performance, a quality of someone who's always on the verge of sighing or screaming and only barely holding himself back. One hopes Catching Up is not just a portrait of belated adulthood but an introduction of sorts to his own promising work as an actor.

Catching Up is now available to rent on Apple TV, Prime Video, and various On Demand services.