by Bill Chambers Notoriously anti-sports (or at the very least sports-agnostic), I thought maybe the X-Games would win me over--so much colour, so much thunder, like Hal Needham's rushes out of context. Alas, they're yet another not-for-me athletics event. I was made painfully aware of this fact while watching ESPN's Ultimate X, an IMAX production: In a sight fertile with joy, a man mounts a plastic shovel not much bigger than the one that comes with children's sandpails and slides down a snowy hilltop; but then you find out that "Super Modified-Shovel Racing" besmirched the X-Games in the eyes of its organizers and has since been gonged. With it went a new sport's sense of humour, and I am definitely the genre of film buff more entertained by the dancing mascots at half-time than by the repetitive "thrill" of competition.

Ultimate X is a commercial for the X-Games that undersells its own product by cutting to commentary from personnel in which they overstress that 'we ain't seen nothin' yet.' You start to wonder, If that's the case, why do you keep making me sit through this shit? What's here is impressive enough, I suppose, although there's only so much swooping towards the camera, swooping away from the camera that one can take before becoming desensitized to the Zen control these skaters and bikers have over their own gravity, even with some big names (like skateboarding legend Tony Hawk and motocross champion Carey Hart) among the cast. And there's just something tasteless, particularly post-9/11, about men--and women (though the female element receives parenthetical treatment at best in Ultimate X)--who'd risk their lives for a two-wheeler backflip, who laugh off comas and wear their injuries like badges of pride as these X-Gamers do. They reek not of sweat, but of stolen bravery.

THE DVD
Still, I admit it's probably all a lot more thrilling in IMAX. Touchstone's THX-certified DVD release of Ultimate X crops the 1.44:1 IMAX aspect ratio to 1.33:1 fullscreen at no obvious cost to composition. The image is surprisingly grainy given the fine resolution of the IMAX format, while the softness of shadow detail in some shots disappoints. Outfitted with DTS and Dolby Digital 5.1 audio, Ultimate X's mix is powerfully loud but inarticulate, approximating all too well the aural blur of a noisy arena. There is little difference between the two soundtracks, though the hardcore hip-hop comes across with stronger highs and lows in DTS. 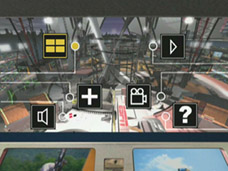 Don't be fooled by the glyphic menus (right)--there are a ton of extras on this disc. Most of the supplements are accessible via the Rollerball-esque interface in addition to the film's "Ultimate" viewing mode: clicking on icons that pop up periodically during Ultimate X in a busier rendition of the 'White Rabbit' feature leapfrogs the viewer to various interviews and bonus footage. You'll uncover extended discussions with skaters Tony Hawk, Bob Burnquist, and Bucky Lasek, motocross riders Travis Pastrana, Brian Deegan, and Carey Hart, BMX cyclists Cory Nastazio, TJ Lavis, Ryan Nyquist, Stephen Murray, and Dave Mira, and a portrait of the infamous street lugers. Plus: 2001 Medal Moments; skate and BMX trick breakouts; excerpts from the 2001 BMX Downhill Finals Run; more BMX dirt stunts; and a mini-doc on BMX legends.

Find by pressing the main "X" icon within the bonus materials menu an "X-Gallery Mega Mix" of such songs--six in total--as 3rd Strike's "Flow Heat" and Schatzi's "Death of the Alphabet," all in 2.0 stereo; a tour of Ray Flores's Venice Beach shop "Board Gallery" (under "Old School"); a selection of outtakes ("Hits and Misses"); more on--get it?--injuries ("Broken Bones"); more with the "Girls of the Games;" an option to register your Ultimate X DVD; a tracklisting for the music from each of the sub-menus; and trailers for Reign of Fire and the Joel Schumacher Bad Company. Originally published: February 10, 2003.