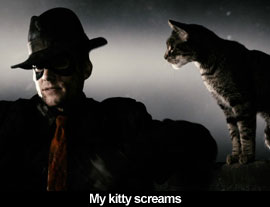 by Walter Chaw Frank Miller is something like a god in the modern comics era--at least he is to me. The guy who invented the graphic-novel form for most non-true-believers with his The Dark Knight Returns, he's recently been in the conversation because of the film made from his Sparta book (300) and Robert Rodriguez's excellent, Miller-driven Sin City, and he's the one who introduced to me the idea that comic books were a medium and not a genre. So when Miller reveals that he's taking the reins of a big-budget comic-book adaptation, there's reason for excitement that something from his extensive backlog could see the light of day under its creator's hand. (I have the same hope for that asshole Alan Moore, as well as Grant Morrison--and, hell, Sergio Aragones.) Astonishing, then, that he would first choose to adapt Will Eisner's seminal, 1940s comic inset "The Spirit", then to adapt it as an acid, unfunny ape on the kinds of films Miller himself has helped to popularize. It tastes like a bitter pill, like sour grapes masquerading as satire without a real clear indication of what Miller so dislikes about the recent hits based on his work. A waste of time to say that The Spirit is dreadful (and an understatement besides: The Spirit makes dreadful look like Van Gogh); and it's hardly more fruitful to poke holes in the whys and wherefores of its failure when those are obvious from the first five minutes of its benighted existence. Time is better spent, perhaps, trying to pull out of it some sort of insight into why no one called "shenanigans" on this abortion at any point. It's unbelievable, really. And far from dissuading me from the idea that Miller is a genius, I'd argue that it takes a special kind of genius to make something this full of bile, this incompetent, this unwatchable, this bad.

In lieu of discussing the big scene where Samuel Jackson and Scarlett Johansson don Nazi garb to torture our hero played by Gabriel Macht, let's instead observe that The Spirit melds Sin City with Dead Men Don't Wear Plaid, crafting a chimera composed of hard-bitten images and narration with fourth-wall-breaking slapstick and Grand Guignol banana peels. Macht is the titular masked crusader, protecting a giant Metropolis from the clutches of the evil Octopus (Jackson) and his gaggle of cloned henchmen all played by Louis Lombardi. Apparently both Octopus and Spirit are invulnerable to physical assault and, apparently, this is the film that will reveal how that is so. It also deals with the Argonaut mythology, including an appearance of the Golden Fleece and an amphora containing the blood of Hercules, which makes it all the more extraordinary that the thing that stands out most in this piece of shit is a minor performance by young Seychelle Gabriel (playing the Eva Mendes character in flashback), who deserves to be a star. The Spirit also deals with the reappearance of his old flame, jewel thief Sand (Mendes), whom he realizes has returned to her old haunts after he finds a Xerox of her ass in the waste basket of a dead guy. Lo, as luck would have it, both his storylines converge in a grand conspiracy involving Octopus's quest for godhood.

Instantly forgettable as the contemptible piece of garbage it is, The Spirit is an arrogant movie. It believes that it's better than its source, smarter than its audience, and clued in to some great secret about the mechanism of adaptation that no one else is. It fancies itself insightful when the only insight it offers is that Miller doesn't seem to know what it is about his work that resonates. The misogyny herein, for example, doesn't reveal greater truths about gender relationships in noir (as, arguably, Sin City does), nor does it understand machismo in a useful way; it doesn't treat its subject matter with any kind of respect whatsoever, which makes Miller a whole lot like Danny Boyle in that he appears to hate genre pictures but not enough that he's above making money off the people who don't. The Spirit is a giant dump that Miller has taken on the very thing responsible for his success, and it's not done with spite, I don't think, but rather with an almost complete ignorance. Strong to say feckless, closer to the bone to say clueless: Miller is an arrested adolescent, and I'm suspicious that his interpreters (including his fans--including me) have given the work a kind of insight into the human condition that Miller doesn't himself enjoy. Judging just by The Spirit, Miller's world is a gummy place of pages stuck together with spunk and pictures from GUNS & AMMO splitting time with old pulp-novel cover art. His genius might be that he never had the misfortune of outgrowing the pleasure of a moment when the Octopus assaults The Spirit with a toilet while proclaiming that he loves toilets, or when someone who looks like Mendes, oops, drops the towel she's wearing at the hero's command. But it never seemed pathetic until now. Originally published: December 25, 2008.